Today was when the Electoral College was to have been certified in Congress, sealing the fate of the presidential election. It is also the day the Democrats attained a majority in the Senate. Alas, it is also the day Republicans incited insurrectionists and terrorists against the United States government.

It should have been a good day

Today should have been a good day: for Biden & Harris the last ceremonial step of counting the Electoral College votes in the House & Senate, and for the Senate the Ossof & Warnock victories that give Democrats control of the Senate.

What we got instead was Trump inciting riots by his more deluded followers; Rudy Giuliani, the Trump consigliere, actually urged “trial by combat”. The idiots rioted, to start. Then, in an act of armed insurrection against the United States government, they breached the Capitol while Congress was in session with the specific purpose of overthrowing an election and threatening violence to members of Congress. 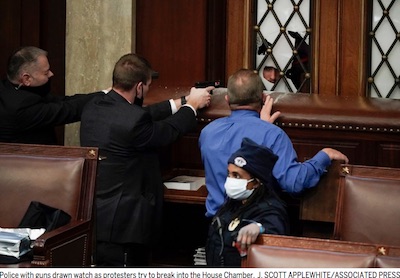 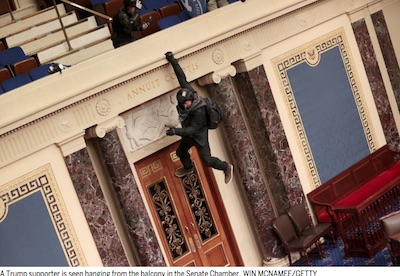 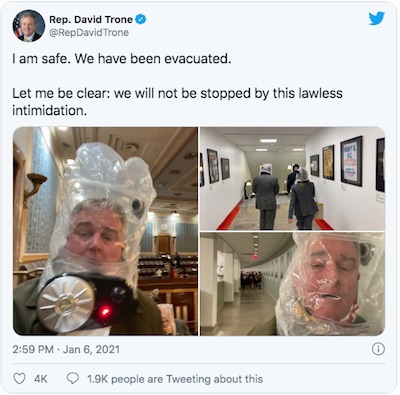 First up, the venerable Globe reports on what amounts to domestic terrorism: Trump supporters, riot and threaten both houses of Congress in session enough to disrupt the Electoral College ceremonies. [1]

The Capitol Police were caught quite unprepared, which is mysterious since pretty much everybody knows Trump has been calling for massive protests. The massive protests turned into armed insurrection when armed rioters broke into the Capitol, threatening violence to members of Congress if they did not overthrow the election and give the presidency to Trump. Here we see the Capitol Police defending the House chamber at gunpoint, while Representatives were being evacuated.

Over in the Senate, insurrectionists clad in paramilitary gear entered the spectator’s balcony, and then jumped down onto the floor of the Senate. (One presumes that at this point the Senators had been evacuated?)

It appears the Capitol Police were about to deploy tear gas to defend the House and Senate, so the Congress was evacuated using gas masks. They do not look comfortable, but tear gas doesn’t look comfortable either, nor does standing in a room being invaded by an armed mob intent on maiming and murder. Senator Romney is quoted in the Globe article as saying to a reporter, “This is what the president has caused today, this insurrection”, reportedly with fury in his voice.

Reporters on the outside called for Congress to avoid “socialism, communism and abortion”, saying people must support “Trump and Jesus Christ”. As a religious person, it is difficult to describe the absolute fury this inspires in me, to see people who understand absolutely nothing of Jesus attempt to wield him for barbaric purposes. 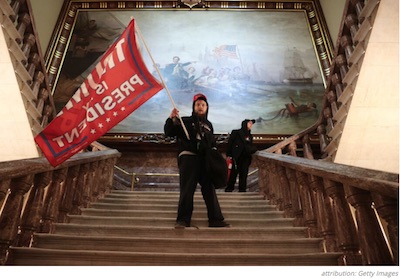 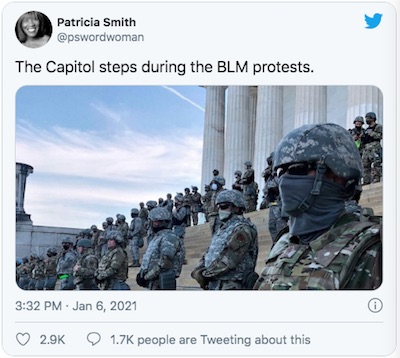 People are engaged in a violent attempt to overthrow the United States government, by disrupting the transfer of power during the counting of Electoral College votes in Congress. Apparently the Capitol Police were completely overwhelmed.

Disturbingly, there is evidence that their plan was to take members of Congress hostage, hold “show trials”, and murder them. This is not a protest; it is a relatively poorly executed coup attempt.

Most infuriating has been the relatively lackluster response from the Capitol Police. Several commentators have compared this with the Black Lives Matter protests: police were ready with a heavily militarized response – in the US we shamelessly militarize our police so they resemble an occupying army – and were ready with batons, rubber bullets, and tear gas. That was for Black people and their supporters. The response to the largely white Trump mob has been described as “relatively chill”, or “I am literally watching white people do some stuff on television I’d be murdered for trying.” In at least one case, a Capitol Police officer was taking selfies with the insurrectionists. It is shamelessly racist and incompetent.

Biden made a relatively measured statement, calling upon President Trump to make a statement. Trump did so, though I refuse to link to it because: (a) he did say “go home”, but (b) also told the terrorists that they were “very special people”, whom he “loved”, and that the election was still “stolen”. It was as delusional as it is irresponsible.

Ivanka Trump, not usually known for her intellect or deep thought on matters of state, confirmed the stereotype in a tweet (now removed) calling for peace, but calling the insurrectionists attempting to kidnap and murder members of Congress by the name “American Patriots”. In her defense – slightly – is the demonstrated fact that she’s just not that bright: she may not understand what she’s saying. After all, her father clearly does not.

The DC National Guard has been mobilized. (Apparently by Pence; Trump still won’t do it. We note with some concern that the Vice President is outside the chain of command of the military, and it can be argued the military is thus operating outside civilian control.) The mobs are being slowly and gently pressed back by police who show absolutely no such restraint with Black Lives Matter. The DC mayor has imposed a 6pm to 6am curfew, though there are still mobs around the Capitol. One person has been murdered, details unclear. [7]

I would say this is a time of deep shame for the United States. But really, we’ve been behaving shamefully since the Republicans began their descent into madness at the time of Reagan. Now, it’s just … obvious.

If you support even the best of Republicans, for any office, under any circumstance, you are enabling the worst of them. You are complicit. Please don’t do that. 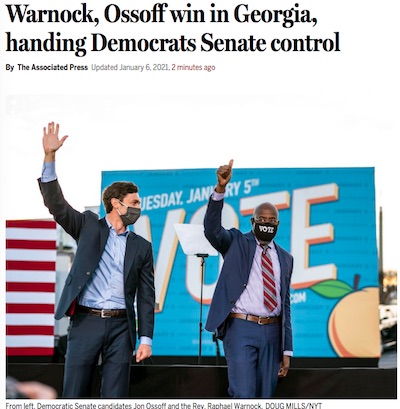 Still… the AP has officially called the Georgia run-offs for the Senate in favor of Warnock and Ossof. [8] (Though as of this writing, Loeffler has not conceded and is promising the endless legal challenges she apparently learned from Trump.) The Democrats will likely control the Senate as soon as they can be sworn in, presumably tomorrow. With control of the House and the Presidency, this means the adults will soon be back in charge.

On the other hand, as the inimitable PZ Myers put it earlier today [9], these were shamefully close races. Almost 50% of Georgians looked at the last 4 years, and decided for more of the same. I expressed a similar sentiment here about the presidential election.

Also, keep in mind that by world standards, American Democrats are a conservative party. They’re just marginally less crazy than Republicans. That’s why other developed nations have something like Medicare for All, but we still engage in witch hunts.

The current situation is balanced on a knife’s edge: 50-50 in the Senate, with the VP casting the tie-breaking vote. That means Joe Manchin (D-WV), the most conservative Democrat in the Senate, now has effective veto power over policy. The Senate Democrats will do anything to prevent him from switching parties, even if he is ideologically more aligned with Republicans. Perhaps there will be quite an influx of public spending into West Virginia. The good side of me wants to say they’re a poor state and probably need it. The angry side of me wants to say it’s just another blue dog in the manger (to mix a couple of metaphors unpleasantly).

Today should have been a good day. It was not.