Well, that was somewhat… unsatisfying

Today the AP finally called Georgia for Biden, after the hand recount. But the Senate still hangs fire until the runoff in January. And apparently, 73 million Americans somehow voted for Trump?! 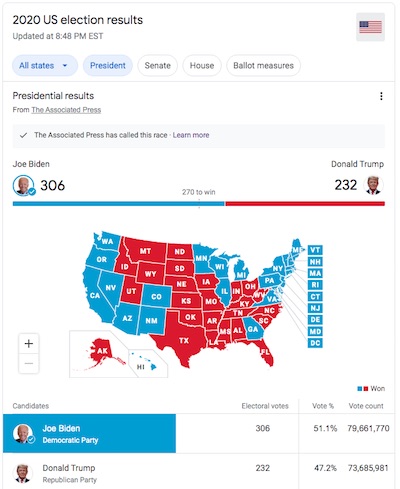 Today the AP finally called the last state, Georgia. [1] AP has an official policy of not calling a state where the result is (a) very close, or (b) legally subject to a recount if demanded by one of the contestants. Both were true in the case of Georgia. In an abundance of caution, the ballots were hand-recounted (“risk-limiting audit”, in the parlance of election workers) shifting votes by a few thousand but leaving the result unchanged: a win for Biden by a 0.2% margin of Georgia voters.

So Biden wins the Electoral College, 306 Biden to 232 Trump; 270 required to win. There are, unfortunately, a number of complex steps that must happen next in the arcane, archaic, and downright silly US election system. Trump seems hell-bent (and I use that term in its proper theological sense) on interfering at each stage:

So… lots of places for things to go wrong.

As if that’s not enough, both Georgia’s Senate races go to a run-off on 2021-Jan-05. Democrats must win both of them, or the Senate will stay Republican. A Republican Senate means no judges confirmed, no legislation on health care, tax reform, climate change, or anything. Mitch McConnell (R-KY) has already said he wants veto power over any Biden cabinet appointments. His record as a dog in the manger, blocking everything is well-documented.

So getting anything moving in the US depends on winning both those Senate seats in Georgia, at which point the Senate will be 50-50 with Vice President Harris casting tie-breaking votes. Democrats will still have difficulty doing anything, since they will need absolute unanimity to get all 50 Democratic Senators on board; the most conservative Democrats will effectively have veto power. And that’s the best outcome.

So here at Chez Weekend, we donated (a small amount of) money to the Warnock and Ossof campaigns for Senate in Georgia. We did it through the Warren Democrats page for flipping the Senate at ActBlue, but you can find other ways to give them a few bucks and maybe save the world. Please do that, if you can.

But what really scares me: the election was not a landslide; 73.6 million Americans voted for Trump. They can’t claim they didn’t understand who Trump is, since he’s been in our faces for years now, yelling and throwing things and generally crapping on the republic. These voters took a look at the chaos, the incompetence, the corruption, the grifting, the quarter million dead beause of mishandling public health in COVID… and said “Yeah, I’ll take another 4 years of that, please.” Who are these people? How can they be that irrational and still function?! Last week Scalzi, over at Whatever, summed up the situation in his essay “The Sound of a Landslide Not Happening” [4]:

That is… pathological. And it’s what scares me most: half the US population is, as far as I can tell, outright crazy in a self-destructive way that they want to impose on the rest of us.

↪︎ Reply to Pablo
Comments for this post are closed.