Two questions: what do we know about disease-induced vs vaccine-induced immunity, and what is the actual prevalence of COVID-19 beyond “officially reported” cases? Now there’s some data to think about here, though we can’t completely answer those questions. 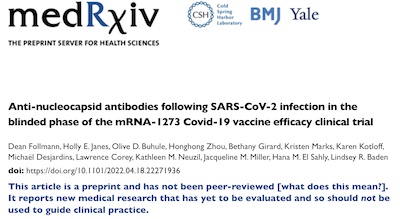 Somebody asked me, indirectly via a friend, about a recent medRχiv preprint on anti-nucleocapsid antiobodies in vaccinated versus unvaccinated people. [1] A little récherché, I thought, but it turned out the friend-of-a-friend’s real question was far, far more bizarre than even my pessimistic imagination had suggested:

… It’s not peer-reviewed yet, but there was a bombshell working paper released this month by the National Institute of Health, using Moderna’s own clinical trial data, that shows unvaccinated people develop significantly better immunity after Covid than people who have been vaccinated.
…
The study all-but-proves the mRNA shots themselves – and not whatever reduction in viral loads they may cause – are impeding the development of the anti-nucleocapsid antibodies.
…
According to the study, this could explain why vaccinated people get sick over and over, sometimes only months apart. The vaccine is a narrow defense for one specific virus mutation. Our natural antibodies are a broad defense. If the vaccine is messing with it, I think that’s ominous.

First impression: this looks like pure anti-vax madness from someone who doesn’t understand what an anti-nucleocapsid antibody is, when it is or is not relevant for immunity, and why it’s used in assays to measure community infection rates but not in vaccines. And who is willing to throw around wildly dangerous claims, very irresponsibly.

Still, let’s check out the paper to be sure.

The paper is in no way about the disease resistance of vaccinated versus unvaccinated people. Instead, it’s about measuring something called anti-nucleocapsid antibodies (antibodies to another part of the virus away from the spike protein) to get some idea of what fraction of the population has been exposed to the actual virus, not just the vaccine. That is, it’s about a public health assay.

Now it turns out that vaccinated people, when they have a breakthrough infection, generate less anti-nucleocapsid antibodies than the unvaccinated. So if you’re calibrating an assay to run on the population, there will be a lower positive-calling threshold in vaccinated people than in the vaccinated. The study is about getting this right.

There are lower anti-nucleocapsid antibodies in vaccinated people after breakthrough infection, because:

Basically, for a vaccinated person there’s no point in making anti-nucleocapsid antibodies, because (a) the spike antibodies which they make in great quantity are usually enough to clear the infection, and (b) the nucleocapsid protein is inside the viral envelope where your immune system can’t see it until it’s infected a cell. So it’s pretty useless as a first-line defense.

Let’s examine some of the quantitative results from the paper: 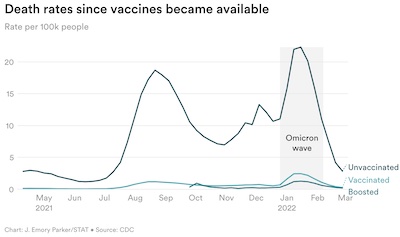 Vaccines do not lower your immunity. They are designed to do the opposite, and they do a very good job of it. Consider the death rate in the US in the most recent wave, stratified by vaccination status. The plot shown here, from STAT News, is the one we used in a blog post on the day the US crossed 1 million official deaths. It shows very clearly that very few of the deaths were among the vaccinated, and even fewer among the boosted. This a stage of the pandemic in which the unvaccinated are responsible for substantially all the deaths. Remaining unvaccinated is volunteering to die, and attempting to bring down the rest of society with you.

The bad news: Anti-vax crazies are wildly misinterpreting this paper, turning the calibration of a public health assay into some weird theory that unvaccinated people have better immunity. They do not.

The good news: The good guys are calibrating public health assays so we can get good, hard, reliable numbers on the rate of infection in the population in general. That’s hard now that everybody has at-home tests whose results they never report!

My friend’s informant is propagating dangerously nonsensical disinformation. I hope it’s through not understanding, rather than deliberate. 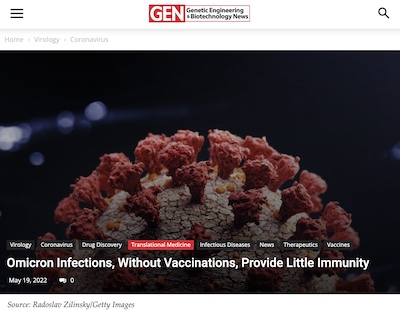 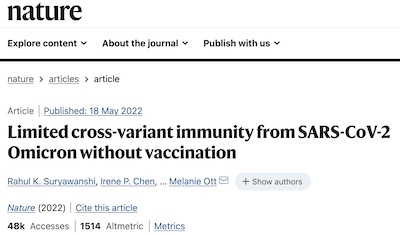 An article a couple weeks ago in Genetic Engineering & Biotechnology News [2] pointed to a paper in Nature [3] which addresses this.

The title is so good you (almost!) don’t need the rest: if you’re unvaccinated, you will get Omicron, and the Omicron-induced immunity has little effect on other variants. So you will get sick again.

Still, let’s listen to their words, not mine:

The question arises whether widespread Omicron infections could lead to future cross-variant protection, accelerating the end of the pandemic. Here we show that without vaccination, infection with Omicron induces a limited humoral immune response in mice and humans.
…
Sera from unvaccinated, Omicron-infected individuals show the same limited neutralization of only Omicron itself.
…
Our results demonstrate that Omicron infection enhances preexisting immunity elicited by vaccines but, on its own, may not confer broad protection against non-Omicron variants in unvaccinated individuals.

In other words: be safe, get vaccinated. And boosted.

A survey of COVID-19 incidence and paxlovid awareness 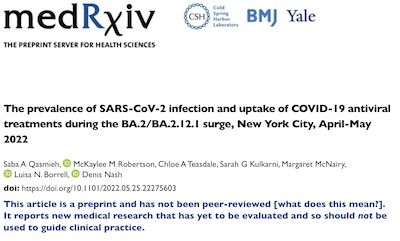 Another question raised by the valiant attempt to make a nucleocapsid assay to measure population infection rates: what is the real infection rate, anyway? Not just the official, PCR-confirmed rate, because people test at home and the don’t report the results.

Another medRχiv preprint landed last week, with a survey of New York City that attempts to answer this question. [4] Basically, they surveyed $N = 1030$ NYC residents of age over 18 years, by either smartphone or interactive land-line phone calls. I won’t go into the details, but they were careful to create a reasonably representative sample broken down by age, ethnicity, race, language spoken, borough of residence, and all the usual things.

There were a lot of survey questions, because it was carefully designed, but mostly it came down to verifying answers to a couple questions: 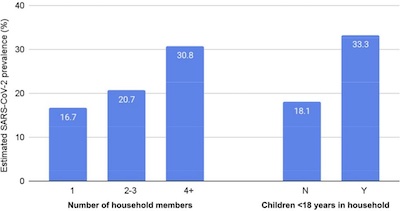 Interestingly, they call out 2 particular risk factors in Figure 1, shown here: living in a larger group (e.g., family size), and the presence of children under 18 in the household. More people probably means more chances to infect each other. Kids go everywhere (not always masked), and can be asymptomatic carriers back to their families.

Also: higher infection in the Hispanic group and those less educated. Income, surprisingly, didn’t seem to matter much, nor did which borough of residence in NYC.

Did I mention you should still get vaccinated?