[Tone warning: Angry post.] We reached yesterday a grim and disgraceful milestone in the US, having at least 1 million COVID-19 dead. And that’s just the official count.

Cumulative COVID-19 deaths around the world 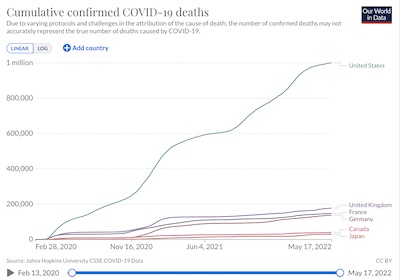 From Our World in Data comes the terrible news that the US now has ≥ 1 million official COVID-19 deaths. [1] (They repackage and visualize the excellent COVID-19 data sourced from Johns Hopkins University.) Shown here is the time course of cumulative deaths officially assigned to COVID-19 for the US and several comparably developed nations. (You can fiddle with the plot at Our World in Data to choose which countries to include.) Some curious facts to note:

Cumulative COVID-19 deaths, per million, around the world 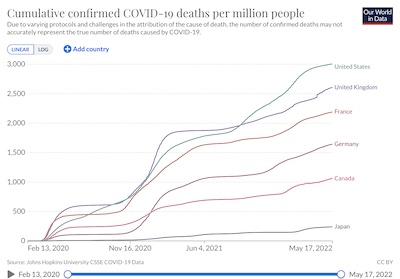 Now, you might argue that this should be scaled by population: since the US has more people than Japan, of course there are more deaths in the US, right?

Not really. Here are the cumulative deaths per million for the same countries, from the same source at Our World in Data. While you might argue it’s not quite as awful, 2 brute force facts remain:

At the beginning of the pandemic, the Weekend Editrix had been contemplating a trip to Japan to visit family. Had she taken that trip and gotten stuck in Japan, she’d have been far safer than by remaining here in the US. (There would have been other issues, like lapse of visa. Other issues can be fixed; dying of COVID-19 could not. So the trade-off might have favored evacuating her to Japan if we’d known all this. Fortunately, we could isolate pretty well and got through it in the US quite well so far.)

Excess mortality: How do we know it’s about COVID-19?

We emphasize the above are official deaths, because of the politicized crap dropped on the subject by the right-wing denialists: “from COVID” vs “with COVID”, insistence on pre-existing conditions, and so on. As a result, official counts are always underestimates. 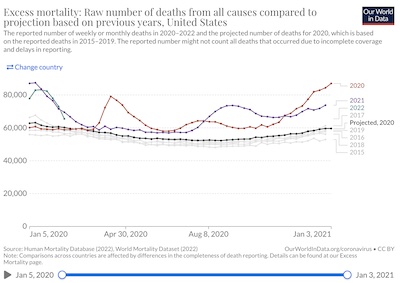 One way to probe a little closer to causality is to use something called the excess mortality measure. We’d like to know if, by comparing to recent years that are reasonably similar except for the pandemic, we see differing death rates. If so, then we are at least a step closer to assigning the excess in deaths to whatever’s different, i.e., COVID-19.

The first plot here, explained at Our World in Data [2], should give you the idea: 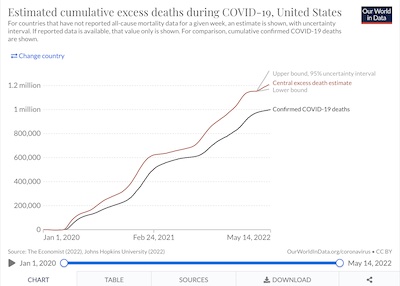 The folks at The Economist have made a machine-learning model to estimate the true butcher’s bill and its 95% confidence interval in the US (and rest of world, q.v.). [3] [4] 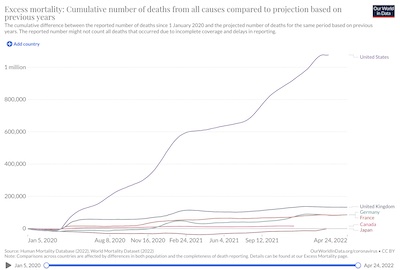 The folks at OWiD did something similar, computing just the central estimate without confidence intervals, but doing so for many countries. Plotted here is the number of cumulative deaths for the US (a depressingly large positive outlier) and the usual developed nations cited above.

Excess mortality & underestimates around the world

So the US has glaring underestimates of COVID-19 deaths, though not as bad as I’d feared.

What about the rest of the world? 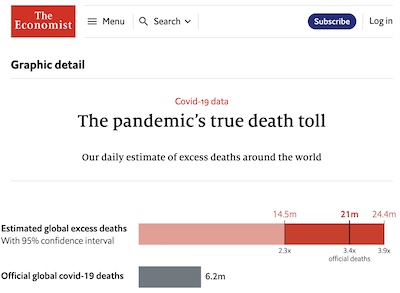 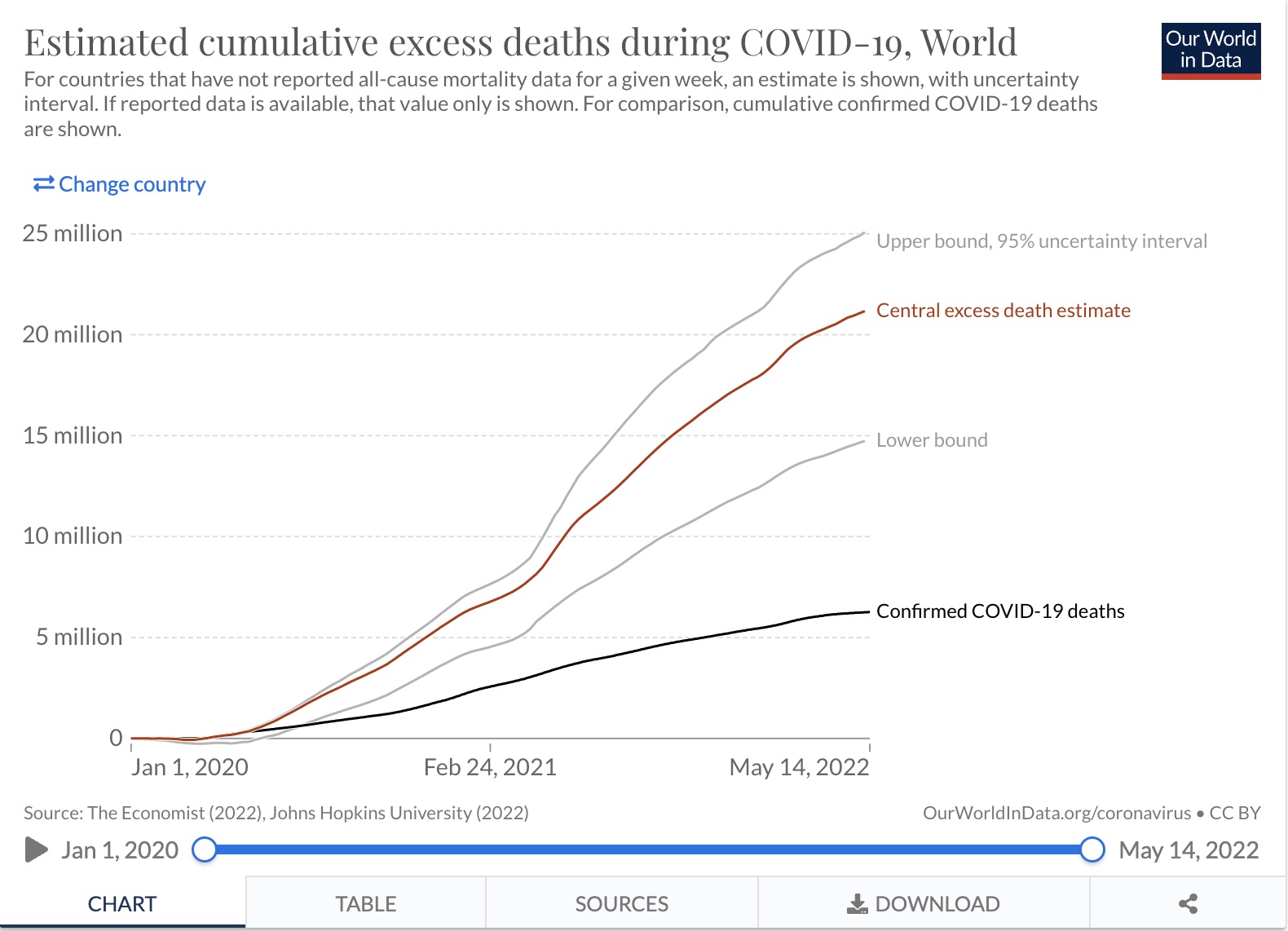 The model from The Economist says:

The degree of worldwide underestimate of the total deaths here is just stunning.

This may slightly undermine our case above that the US has been uniquely incompetent. Unfortunately, it does not make the US look any better, but just makes everyone else look worse.

These grievous times are not those for which we, or anyone, were hoping. (“Tempus adest dolorum, hoc quod non optibamus”, as the old song most definitely does not go!)

Yeah, but what could we have done? 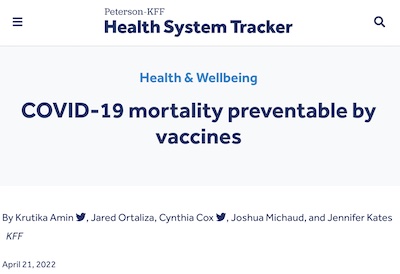 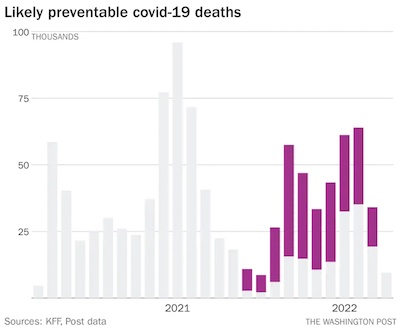 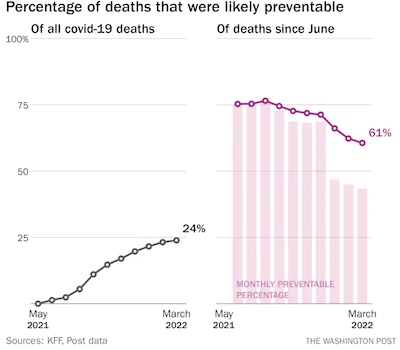 From Philip Bump in the WaPo comes a report that about 1/4 of the million now dead could have been prevented by vaccination alone. [5] He’s reporting on an update of some Peterson/KFF research by Amin, et al. [6]

Bump goes on to point out that this isn’t just the average American bungling of COVID-19. It is very specifically Republican-caused death:

Since this analysis is based on national data, the researchers didn’t break down the number of preventable deaths per state. But we would be remiss if we didn’t note that this phenomenon is not independent of politics.

Over the course of the period during which vaccinations were broadly available, KFF has been assessing the partisan divide in vaccine uptake. There are gaps in the likelihood of being vaccinated by age and race. But the broadest gap seen in KFF’s data is by party. Last November, it estimated that the unvaccinated were three times as likely to be Republican as to be Democrats.

That correlates with where coronavirus deaths are occurring. During the period since September in which the delta and then omicron variants struck, it was consistently counties that voted for President Donald Trump in 2020 that saw more per capita deaths. Lower vaccination, more death.

It is rare that there is a political issue that translates directly into literal death. This is one. Skepticism about vaccination – an impulse stoked opportunistically by Republican politicians such as Rep. Marjorie Taylor Greene (R-Ga.) and right-wing media figures such as Fox News’s Tucker Carlson – suppressed immunization rates among Republicans. More than 200,000 people died without the protection that the vaccines demonstrably offered.

And that’s just with vaccination. Imagine if we had all played by the rules of public health policy: worn masks in public, avoided unforced public gatherings, isolated when testing positive, self-reported cases, and so on.

So… yeah, we could have done something, but were prevented by malignant right-wing zealots. Like some malignancies, I fear this one may be terminal for American democracy and prosperity.

I mean, it could be worse: both Eritrea and North Korea have used no vaccines at all. [7] The Eritreans at least have the excuse of being continually in a state of near complete meltdown. The North Koreans, on the other hand, have refused donations of vaccines because they’re continually in a state of near complete authoritarian insanity. US conservative politics, with its fact-free idolatry of Trump and his eerily similar authoritarianism, is beginning to resemble North Korean fact-free idolatry of Kim. 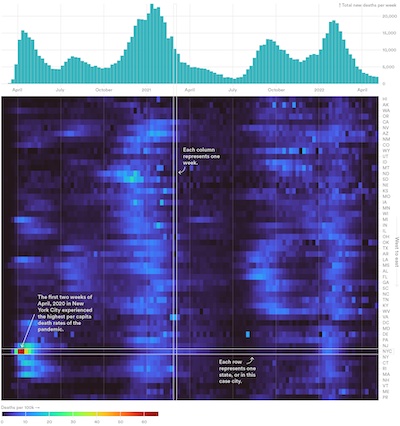 Emory Parker, writing at STAT News [8], has attempted to use public health data to give us a short history of the pandemic in 5 phases. We won’t go through every detail of his article here, but some highlights are worth reviewing (if only in order to tempt you to read the whole piece):

In other words: it didn’t have to be this bad, except that we were stupid.

There’s a lot more in Parker’s article, including a subtle point about age groups (COVID-19 didn’t kill as many young people because young people die less frequently from everything, but it did become one of the leading causes of deaths among the young; rural areas resisted vaccination and thus had loads more people dying as a consequence; poverty is a risk factor for everything; US health insurance is terrible; and so on).

His conclusion (emphasis in original):

These five patterns show how SARS-CoV-2 exacted a toll few could have imagined in the spring of 2020. The why of one million is a story of both scientific achievement which saved some lives and of systemic failures which cost far too many. Of heroism and sacrifice beset by distrust and partisanship. Of collective action weighed against individual risk and responsibility.

Whether or not we are done with the virus, it seems the virus will do its best to stay with us. 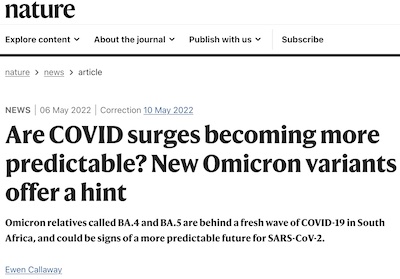 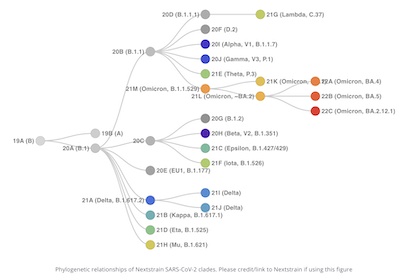 Finally, a news article by Ewen Callaway in the respected journal Nature [9] gives us an idea of what’s happening with SARS-CoV2 viral evolution and the resulting COVID-19 surges. He’s using data from CoVariants/NextStrain [10] to make the point that viral evolution is happening because not enough people are vaccinated, with the result that some new strains evolve to cause new waves of misery and death.

The proximate cause of the article is the emergence of the BA.4 and BA.5 strains in South Africa. Where vaccination is low, viral mutations will happen. That’s causing another wave in Africa, which will spread around the world soon.

Why? Because the virus is evolving! Shown here is the cladogram (“family tree”, more or less) of the various more widespread SARS-CoV2 variants. (There are thousands more; these are the ones that got serious notice because they were widespread and threatening.) Time proceeds left to right. The root of the tree on the left is the original Wuhan strain. The rest is mostly our fault for failing containment, public health, and vaccination.

When you see a cladogram like this – frantically growing sideways to be very bushy, then all branches except one dying out – that’s a sign of evolution in action. The bushiness is rapid mutation and formation of new variants. The single surviving line is rapid environmental selection for the “best” spreader (i.e., the “worst” for humanity).

We should be ashamed, but I doubt we will be. Our capacity for shame has been too severely impaired. One must first have the knowledge of what’s correct, and then acknowledge a fault with respect to that knowledge, in order to experience shame.

The malign influence of conservative politics may have made us too stupid to survive. And so: here we are, dying. More than we can even admit to each other. 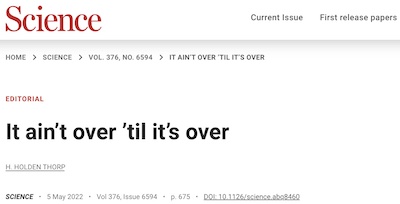 An editorial titled – with grim humor – “It ain’t over ‘til it’s over”, by Holden Thorp in the respected journal Science [12], conveys some of the frustration scientists are feeling with people’s decisions to ignore the pandemic and pretend it’s over. That’s called giving up and dying. (Note that while writing this editorial, Thorp himself got COVID-19, and began taking paxlovid.) Let’s let Thorp’s last paragraph have the last word here (with a bit of emphasis from your humble Weekend Editor):

SARS-CoV-2 is rapidly mutating and recombining, and more variants and subvariants – potentially more pathogenic – are on the horizon. The world is still barely vaccinated, and even in wealthy countries like the United States, resources are inequitably distributed. It absolutely ain’t over. And this is no time to drop the ball.

3: The Economist Staff, “The pandemic’s true death toll: Our daily estimate of excess deaths around the world”, The Economist, retrieved 2022-Apr-23. This article presents their machine learning model’s estimates of excess mortality by country. NB: Behind an execrable paywall. ↩

4: The Economist Staff, “How we estimated the true death toll of the pandemic: Dealing with potential outcomes, known unknowns, and uncertainty”, The Economist, retrieved 2022-Apr-23. This article explains their model’s methodology. NB: Behind an execrable paywall. ↩