Our newest COVID-19 antiviral medicines, molnupiravir and paxlovid, have been out for a while now. What’s the real-world experience on efficacy?

Molnupiravir has, since the beginning, had a bit of an odor about it. The clinical trial had a couple fishy things going on, like the fact that the initial and completion cohorts had vastly different efficacies. It doesn’t hit the news much, but when we worked out the details on this Crummy Little Blog That Nobody Reads [1], we found the completion cohort had negative efficacy! So everybody wants good data on molnupiravir’s efficacy, to remove the uncertainty and let us use it properly if it really works.

Also, the molnupiravir initial trial was done on unvaccinated participants! We’d like to know how it works on a multiply vaccinated population more likely to represent who we are today.

Also also, the original trial was conducted at a time when the SARS-CoV2 variants were different. How does it stack up against Omicron? 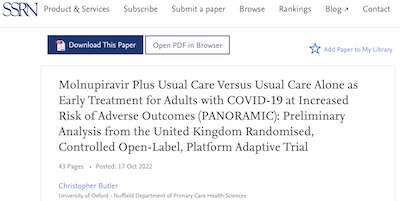 With those questions in mind, our first source is a news article on Medpage Today [2] which reports (and more importantly points us to the original source for) a “very large, open-label, multi-center, multi-arm, adaptive, randomized, controlled trial” of molnupiravir on people hospitalized in the UK. [3] 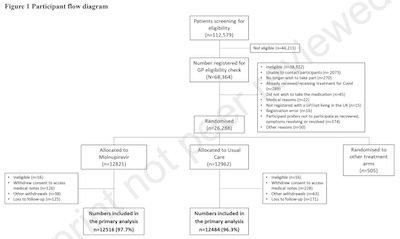 Now, that’s a lot of adjectives! But it really just comes down to the authors advertising that they understand what a trial should be like, and they’ve ticked all the boxes to make a good, high-quality dataset on which we can rely. The patients were selected from a very large initial population, and still managed to track a large cohort:

The outcomes measured were:

They analyzed it with “Bayesian methods”, but frustratingly there are no equations in the paper’s text! I declined to chop my way through the 43 pages of word salad to find the details. Sorry, there’s only so much I can do with still a little bit of post-COVID brain fog.

So it’s a big, complicated trial on the order of size of the orginal vaccine trials. They’re really not playing around here: this was expensive to do!

Let’s take a look at their results (as they reported; given they’ve obscured all the math, I’m not going to check it).

Summary: There was no benefit for hospitalization or death, and only a tiny benefit in time to recovery. Given the risks of driving resistance and wasting medical resources, molnupiravir may be doing more harm than good when used on vaccinated people in the time of the Omicron variant.

Next up is a similar study in Hong Kong, this time of both molnupiravir and paxlovid. Unlike the preprint above, this one has made it through peer review in the top-shelf journal The Lancet. [4] 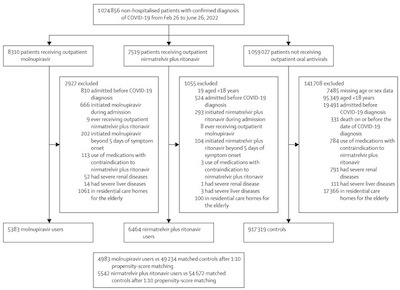 In China, and hence in Hong Kong, they take COVID-19 diagnosis very seriously! Now, that has number of downsides. But, on the upside, it means they have superb data on COVID-19 incidence in the general public. In this case, they started with 5383 patients on molnupiravir and 6464 on paxlovid, and a control cohort of 917,319. As you can see from the participant flow diagram shown here, they started with an impressive cohort of 1,074,856 people! They did all the usual things: randomized selection, case-control sampling for sensitivity analyses, matching patient risk categories & Charlson Comorbidity score, and so on. 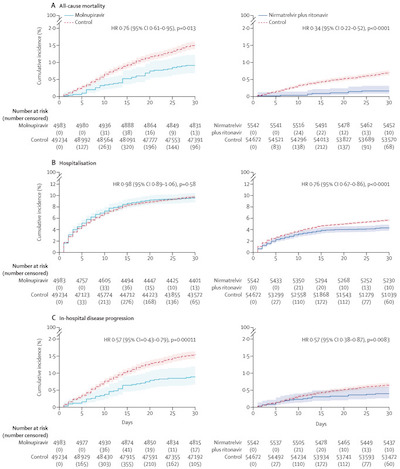 They’ve somewhat buried their results in a paragraph or so of word salad. But sifting through it, we can make the table we see here.

The Kaplan-Meier curves show the same results graphically: molnupiravir doesn’t work vs hospitalization, but everything else works. Paxlovid generally is better.

So we have 2 large, well-powered, carefully designed and analyzed studies. The conclusions are pretty clear: