Somebody asked me about the AstraZeneca press release on their new Phase 3 vaccine trial. AstraZeneca has done it again… just not in a good way.

Perhaps you may recall that this blog has expressed some impatience with AstraZeneca’s previous clinical trial [1]. The situation seems to have been:

This is the sort of thing that makes a grizzled old statistician cry.

Their scientists, we absolutely must note, did the right thing: they went to the regulatory bodies, explained the situation, and got a protocol amendment to try a 2-dose Phase 3 trial. That’s unusual, since you’re supposed to know the dose already from Phase 2, but it’s the best move to salvage as much as could be salvaged.

But then, when they read out last November, their management admitted none of this. They averaged across trial sites with different doses, different ages, and different viral variants – thereby averaging over apples, oranges, and sledgehammers. None of that came out until people dug and asked inconvenient questions. Their CEO, Pascal Soriot, had the gall to claim it wasn’t a mistake because they amended the protocol [2]:

Soriot disputed the idea that the half-dose regimen was an error, saying that after researchers realized the dosing discrepancy they formally changed the trial protocol with the blessing of regulators.

“I won’t tell you we expected the efficacy to be higher,” said Soriot. But “people call it a mistake – it’s not a mistake.”

Yeah. Taking a pratfall and then saying “I meant to do that” always increases your credibility.

You know what actually increases your credibility? Saying something like: “Hey, we screwed up in a few places here. We’ve taken these steps to make sure it doesn’t happen again. In the meantime, here’s the most honest case we can make with the slighlty compromised data. We think it looks pretty good, and would appreciate peer review.” That has the virtue of being true, positioning yourself as being honest, and placing reliance on data rather than personalities.

This is, we admit, a hard lesson to learn.

So what have they done this time? 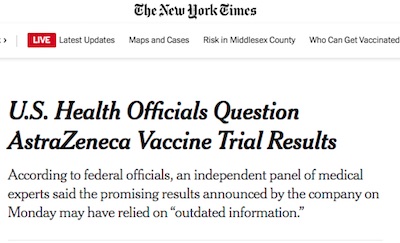 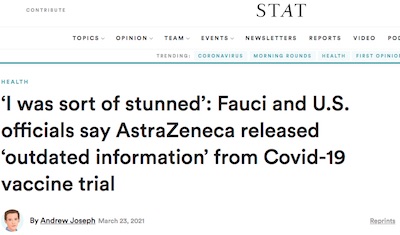 For our first pass over the issue, let’s look at what the (more or less) general media have to say. The report from the New York Times by Robbins, et al. [3] sets the state in general. Then, as seems now to be the custom, we went to the usually more scientifically- and mathematically-literate STAT News for an article by A Joseph [4]:

… highly irregular … I’ve never seen anything like this. It’s so, so troubling.

Tony Fauci, head of NIAID in the NIH:

I was sort of stunned. The data safety and monitoring board were concerned that the data that went into the press release by AZ was not the most accurate and up to date data. That is what the DSMB communicated to AZ in a rather harsh note. Having seen that letter we could not just let it go unanswered.
…
We just felt we could not remain silent. Because if we did remain silent, we could be understandably accused of covering something up. And we definitely didn’t want to be in that position.
…
In my mind, it’s an unforced error by the company.

An “unforced error” for a late-stage drug candidate about to go before approval boards is very harsh criticism. Also accurate, as far as I can see.

Tony Fauci on the potential to undermine public confidence in science and in particular in the safeguards in place for medical approvals:

If you look at it, the data really are quite good, but when they put it into the press release, it wasn’t completely accurate. We have to keep essentially trying as hard as we can to get people to understand there are safeguards in place.
…
Obviously that’s [public confidence in vaccines] a concern whenever something like this happens, that it could erode public trust, yes.

Ok, that’s more or less the media situation. But what do the primary sources say, from the principals involved in the matter? 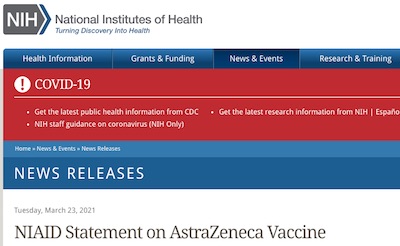 We looked at the AZ press release announcing the 79% efficacy result [5], the NIH statement about the letter they sent to AZ in response [6], and the AZ response to that [7]. However, we couldn’t find the text of the actual letter from the DSMB to AZ; that’s apparently not public, though the NYT above did quote a few blistering sentences from it.

Overall, this is a very hopeful and good result. One can totally understand AZ’s eagerness to say this as loudly and publicly as possible.

Now, we don’t know exactly what the DSMB letter to AZ said. But the NIH/NIAID folks felt strongly enough about it to comment:

How serious is that? The statement itself, issued in the middle of the night, is unprecedented. I’d translate it as roughly: “Hey, the DSMB wants to burn you guys at the stake. We thought we’d urge you to work it out, while they’re gathering firewood.” Given that they’re about to go before the VRBPAC at the FDA, this is serious indeed.

What does all that mean?

Basically, it looks like a fine vaccine. But the AZ management has been a bit of a clown show with mismanaged communication, lack of transparency, attempts to spin everything to make themselves look better, and so on.

The sad part: they don’t need to do this! The vaccine is good enough to speak for itself.

Yesterday the WaPo reported [8] that AstraZeneca revised their public estimate of efficacy downward, from their initial claim of 79% to 76%. This is still a bit of a problem, since as we saw above, the FDA is still claiming an efficacy range of 69% — 74%. But it’s less of a problem, which I suppose is about as much as we can expect from AZ these days.

Let’s see what happens in front of the VRBPAC committee at the FDA, if they apply for authorization in the US. But, as the WaPo says:

The new data may not resolve challenges that the vaccine and the company face in the United States, because repeated missteps have sown confusion and distrust that may result in slower and closer scrutiny of the data.