On Authoritarian Cops in the US

Cops in the US are a hot mess of authoritarianism, viewing themselves as an occupying army. They’re sufficiently out of hand that the “defund the police” movement is starting to look like the side with the cool-headed, sensible arguments.

First, let me apologize for infrequent posting. Post-COVID syndrome is a thing, you know. I get extreme fatigue each afternoon and become non-functional. Before that there’s the brain fog, making even simple tasks difficult. It’s hard to take apart a paper from the scientific literature, check its conclusions statistically, and then formulate a clear opinion to write up!

Also, this is a pretty angry post. Be forewarned.

Back in the 1980s, the rather silly Reagan strand of Republicans began to dominate the party. I shrugged, decided I’d outgrown the Republican phase of my life, and became a Democrat. That was the first phase of my transition to becoming a progressive. (Yeah, I know: I wasn’t born this way, but I got here as fast as I could. Sorry it took the first 1/3 of my life.)

But then, in the 90s, it dawned on me that the rhetoric of American Republicans was getting angrier, and by a lot. Also, they were becoming vastly more authoritarian: viewing themselves as the only legitimate authority regardless of election outcomes, creating crisis after crisis to force right-wing policies down unwilling throats, a whiny claim of persecuted victim status despite holding vast power, and a generally nihilistic and personality cult approach to power. 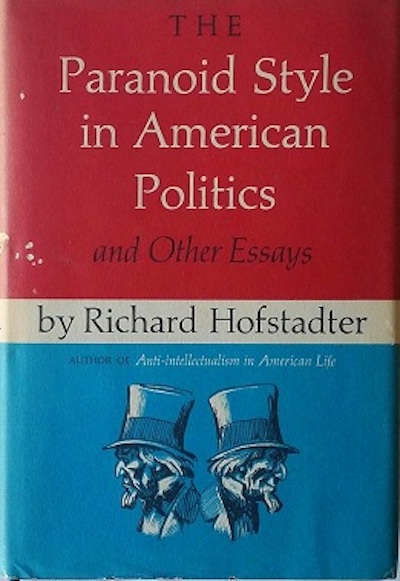 If I’d thought about it – and I did not, at the time – I’d have realized that this strain of politics of the id had been common in American politics. Richard Hofstadter’s famous essay, “The Paranoid Style in American Politics” [1] (later collected into a book of essays shown here) opened thus:

American politics has often been an arena for angry minds. In recent years we have seen angry minds at work mainly among extreme right-wingers, who have now demonstrated in the Goldwater movement how much political leverage can be got out of the animosities and passions of a small minority.

He was of course speaking of the Goldwater campaign in 1964, with its full flowering of paranoid xenophobia and embrace of the possibility of nuclear war. As a kid, I knew something was wrong there, but didn’t quite get what was wrong. I grew up in a Republican family, and thought that made my decisions for me. So, yeah: I get the tribalism thing, but am an example that it’s possible to grow out of it.

It’s been described as one of the most important and most influential articles published in the 155 year history of [Harper’s]”. On the other hand, there’s some evidence that it has become a playbook for several right-wing figures, seeking to work the volatile resentments and emotions of conservatives. One of the best modern examples of Hofstadter’s “paranoid style” is QAnon. 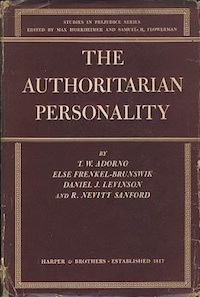 Back to the 90s: I was surprised that the study of “the authoritarian personality” had a rich literature. That’s not surprising, given the concerns of WWII where everyone wanted to now, more or less, “what the hell just happened?!” That was the study of Adorno, et al.’s groundbreaking study The Authoritarian Personality. [2]

This book rapidly became holy writ in political science circles. It’s an excruciating 1,000 pages or so in length, and I’ve personally only painfully excruciated my way through maybe 300-400 pages, concentrating on the tables. Still, the conclusion was clear: fascism finds fertile ground among those with incandescent fury against current authority figures, an idolatrous adoration for their chosen replacement authority figures, and a deep, racist hostility toward anyone who might be part of an outgroup.

They tend to be racist (usually white supremacist), take patriotism to xenophobic extremes, are fascinated by a cult of personality, have an aggrieved sense of perceived injury, feel they have a natural inalienable right to power over all others, and prioritize defense of their tribe as the ultimate good.

That’s pretty much fascism. Adorno and colleagues attempted to construct a psychological test to measure objectively who fit that pattern and to what degree. This became their famous F-scale instrument. They also developed scales for anti-semitism, ethnocentrism, and political & economic conservatism extremes.

The attributes of the F-scale were, as summarized on Wikipedia with nice succinctness, more or less like modern conservative Republican attitudes:

That more or less summed things up for me, in the early 1990s. As a then-housemate summarized, “It sort of makes me sick to my stomach to think people can be like that.” Amen, brother. Amen. 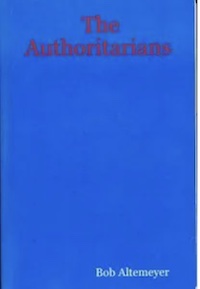 Then somehow I stumbled across Bob Altemeyer, and his book The Authoritarians. [3]

It was mind-opening for me.

Importantly, he reacted – badly – as I did to the Freudian basis of Adorno’s F-scale. Yes, Freud was intellectually popular then, but all that reads like pseudoscience today. So Altemeyer’s RWA scale (“right-wing authoritarian”) is much more principled and founded in objective statistics about personality types without speculating about childhood treatment by fathers and mothers.

His vision for the political trajectory of the US starting in the 1990s is terrifying. Donald Trump is the archetype of the authoritarian dominator (AD), and his acolytes are clearly the authoritarian followers (AF) types that Altemeyer measures. 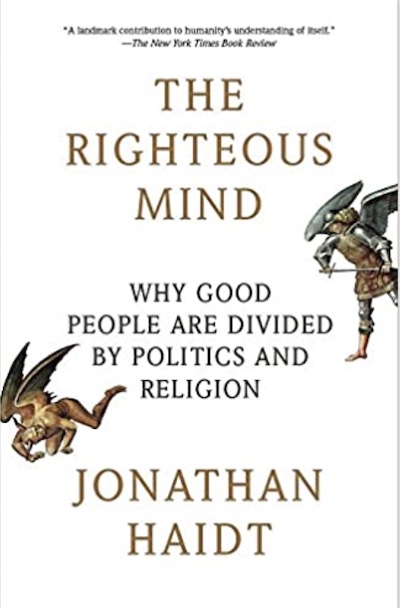 Then, Jonathan Haidt, in The Righteous Mind [4] in 2013, helped make it all clearer for me.

He applied something akin to factor analysis to data on how people made moral decisions. While I have little patience for his “rationalist delusion” stuff, he did make a major contribution to how we think about morality. He ended up with 5 significant factors, upon each of us rely to varying degrees. The first 2 are universal, while the last 3 are almost exclusive to more conservative authoritarian people: 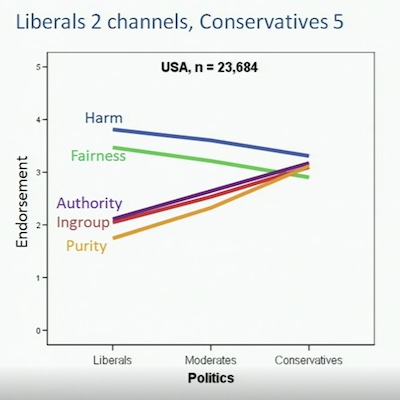 The correlation of factor loadings on these 5 moral foundations factors vs political group is stark. Shown here is an (illustrative, unlikely to be quantitatively detailed) graph from Wikipedia. Note that conservatives value all 5 factors, whereas liberals tend to use only the harm/care and fairness.

So the fundamental discord is: conservative authoritarians regard as foundational to their morality 3 aspects which the vast majority regard as character defects which border on being wrong in and of themselves.

The Awful Consequences on Policing in The Present

So that’s 4 books worth – literally – of where I’m coming from with regard to the perils of authoritarians in general and Republicans in particular.

How does that reflect on our problems with police violence? Huffing on a vial of Republican/authoritarian entitled rage can’t be leading to a good place. Let’s look at some news items from just this month: 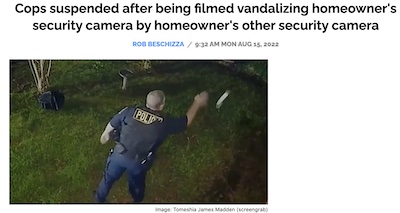 So, yeah: we got big problems with right-wing authoritarians having taken over the Republican party.

Now, if it’s just me saying things like that, you’re entitled to dismiss it as the view of an angry old man. (Which it is. But that is not incompatible with also being correct.)

When many people say things like that, you can dismiss it as just some political movement. (Like, say, everyone who’s anti-fascist.)

But when people whose profession is to determine threats against American democracy say things like that… then it may be time to start paying attention:

Now, look: I have little sympathy for the US Central Intelligence Agency or for those who rise high in its ranks. They tend to hit the Machiavelli and Nietzsche way too hard, while tending to the authoritarian personality disorder themselves.

But when even they recognize Republicans as the biggest domestic terrorism threat to the United States, it’s time: never vote Republican ever again. Not for any imaginable political office, not for any conceivable reason. 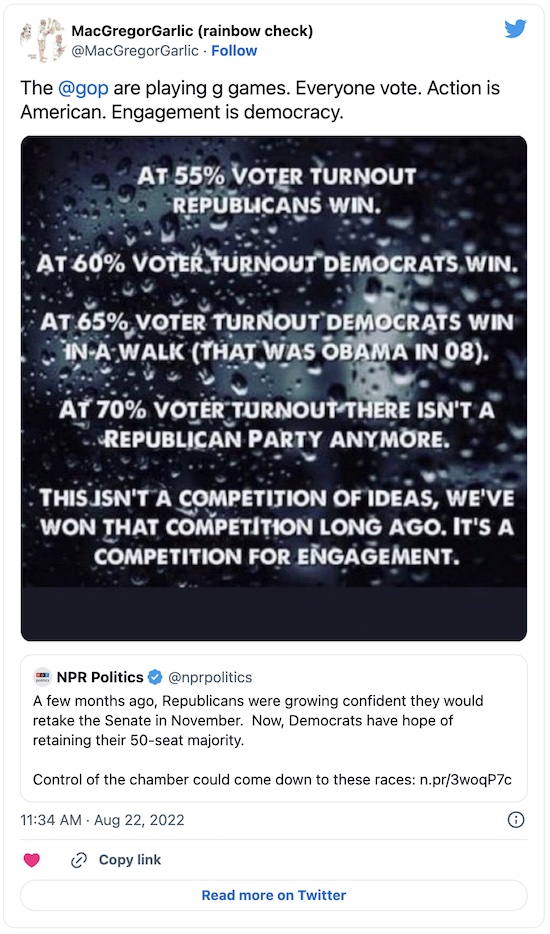 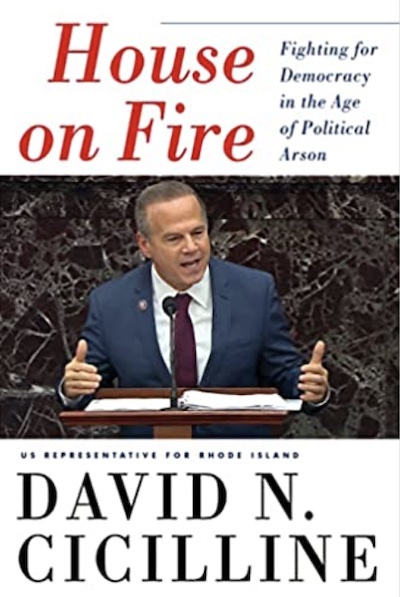 Well, I wrote a pretty angry little jeremiad there, didn’t I? Still… it sums up how I feel about this political moment.

This morning I found an interview on MSNBC with Representative David Cicilline (D-RI) on Morning Joe. [12] He’s written a book called House on Fire [13] calling out the dangers Republicans are posing to US democracy through their authoritarianism and fascism. And yes, he uses those exact words when speaking of Republicans.

when a Hitler comparison is made, the thread is finished and whoever made the comparison loses whatever debate is in progress.

He later pointed out that when discussing actual Nazis and fascists, Godwin’s Law does not apply. Here’s what he had to say about Biden’s characterization of the Trump wing of the Republican party as “semi-fascist”: 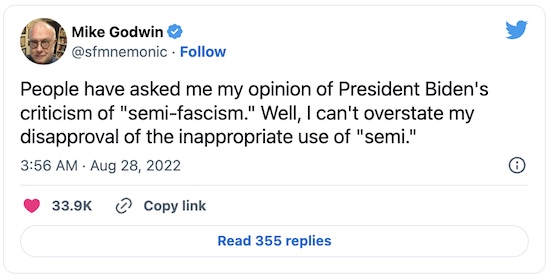 Ok, good snark. But what do serious scholars of fascism think? 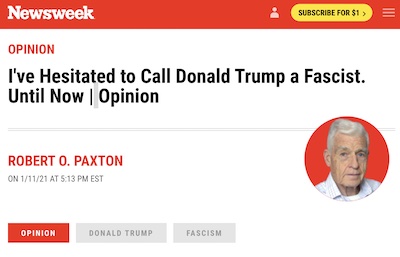 No less a personage than Robert Paxton, professor of political science and history at Columbia, has devoted his career to the study of fascism (in particular the Vichy government under Nazi occupation in France). This is a serious, heavy-weight guy, to whose opinion I will listen respectfully. Writing in Newsweek just after the insurrection on 2021-Jan-06 [14], he writes that he’d hesitated to call Trump fascist until that point.

After Jan 6 though, no doubt remained. Trumpists are fascists (emphasis added):

Trump’s incitement of the invasion of the Capitol on January 6, 2020 removes my objection to the fascist label. His open encouragement of civic violence to overturn an election crosses a red line. The label now seems not just acceptable but necessary.

Nobody blinks an eye when Republicans call Democrats “socialists” or “communists”, both of which are laughably untrue. So why do Republicans throw a hissy fit when they get called “fascists”, a description for which there is amply convincing evidence?

If you are a Republican, take note: it’s time to vote out the fascists who have taken over your party.

Or, you can be complicit.

2: TW Adorno, et al., The Authoritarian Personality, 1950. I know it’s snarky, but to this day I can hardly want to utter the title without wanting to editorialize a bit: “the authoritarian personality disorder”, since it’s so repugnant to me.↩

3: R Altemeyer, The Authoritarians, 2006. NB: This book, as well as much supplementary material, is available on Altemeyer’s web site, as well as in print form. ↩

Amen! Thank you for this.

BTW: I believe The Righteous Mind is the most important book I’ve read this century.

BTW: I believe The Righteous Mind is the most important book I’ve read this century.

Or even… this millennium?

Yes, it’s undoubtedly a very important book! I have slightly mixed feelings about it though:

So, yeah: I’m impatient with Haidt’s helplessness in the face of irrationality, but applaud his use of (reasonably) modern statistical methods to find underlying factors in moral thinking.

(Though I wish The Righteous Mind had included some math! I admit this is a niche preference. :-)

Thanks for stopping by – sometimes I worry nobody reads this stuff.