US Republicans Against Interracial Marriage?!

A Republican US Senator says he would allow states to ban interracial marriage. What?! 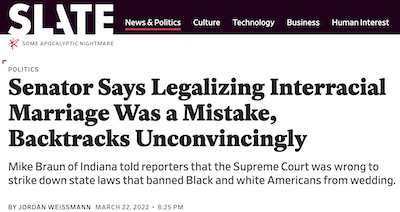 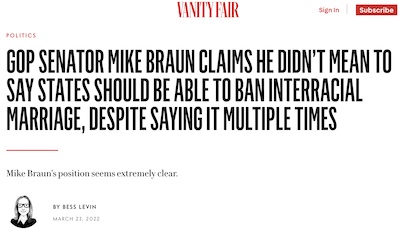 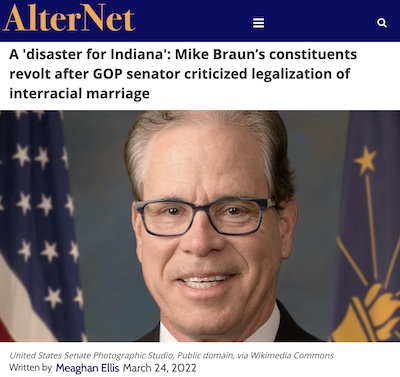 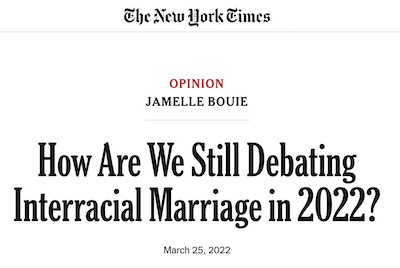 In 1967, the US Supreme Court issued a decision called Loving v Virginia: state-level bans on interracial marriage were ruled unconstitutional. Marry how you like, regardless of race. Up until today, I was dismayed that my marriage would have been forbidden at the state level in recent times, within my personal memory.

Today it got worse. Republican Senator Mike Braun of Indiana claimed, multiple times, he felt that case was decided wrongly and states should be able to ban marriage on the basis of race. [1] [2] [3] [4]

In the eternal fashion of politicians caught voicing their id, he claimed to have been either misquoted or to have misunderstood the question. The quote seems pretty clear, and if he couldn’t understand a clear question when repeated multiple times in variant forms… well, then he’s not smart enough to tie his own shoes, let alone be a US Senator.

He went on to claim Griswold v Connecticut was decided wrongly: that states should be able to limit who has access to birth control! He not only doesn’t want my type of marriage to exist, he worries about condoms in the hands of the “wrong” people.

And of course he wants states to legislate over every uterus, since he’s opposed to Roe v Wade legalizing abortion.

In an attempt to be fair, there has been some backlash in Indiana. A little. While I have family connections to Indiana, it’s clear this a difficult place to be if the citizenry can attempt to shrug this off. I mean, the guy said he’s not racist, he just wants states to be able to abolish interracial marriage, right?

Jamelle Bouie, whom we have quoted favorably here before, has the right of the matter, at the NYT: why are we still debating interracial marriage in 2022?! (Gotta say: Bouie kept his temper better than I’ve kept mine.) His summary:

Senator Braun’s mistake was not that he misunderstood the question; it’s that he understood it all too well. The world he and his colleagues are working toward is one in which the national government defers the question of civil and political rights to the states. And it is in the states, free from federal oversight, where people like Braun can exercise real control over what you might do, how you might live and who you might love. It’s freedom for some and obedience for the rest.

States don’t get to legislate civil rights. Nobody gets to legislate against rights! Anything that can be controlled by a legislature is not a right: it’s a privilege, subject to retraction by majority whim. Rights are resistant that kind of attack.

No, it’s not just some gormless twit who happened to blurt out his true thoughts in public. It’s “endemic”, to use a word the right doesn’t seem to grok either. 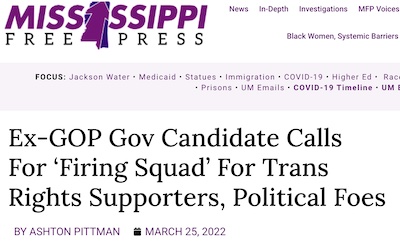 Here by way of immediate example the same day is a minor Republican, one Robert Foster of Mississippi, caught saying the quiet part out loud. [5] He’s already against civil rights for trans people. He also doesn’t seem to be able to distinguish between a trans person and a child sex predator, accusing them all of “grooming” school-age children for sexual abuse.

(This is not uncommon among conservatives. Yesterday Q-anon lunatic US Representative Marjorie Taylor Greene of Georgia warned US Transportation Secretary Pete Buttigeige and his husband to “stay out of our girl’s bathrooms”. [6] She not only can’t tell the difference between a married gay couple vs pedophiles, but she somehow thinks they have an inexplicable interest in girls, underage ones at that. This is a florid display of ignorance and paranoia, regrettably typical of modern Republicans.)

Foster’s proposed remedy: have trans people and their supporters murdered by firing squads.

He has a number of other positions that are equally charming.

Now, here at Château Weekend we’re an interracial marriage and we support full civil rights for all sorts of people. So now the American conservatives not only want to annul our marriage, but then murder us? And they say this openly?

We’re not the ones who need to learn civility, here. Or learn how to be decent human beings, for that matter.

Look, if you’re still a Republican, just face it: this is your party’s brand now. They’re fascist, racist, homophobic, sexist, anti-intellectual authoritarians who tried to subvert a US presidential election.

Get out while you still can.