Proposed source of the "Wow!" signal?

The sad news about Arecibo brings up the topic of SETI. In better news, an amateur astronomer has proposed a particular star as the source of the famous “Wow!” event, using the Gaia Archive. Wait, what?

Popular physics reporting went a bit nuts last week or two [1] [2] [3] (though the professional physics venues have yet to say much at all) about a preprint describing a search for a sun-like star, potentially with planets, that is positioned to have been the source of the “Wow!” signal in SETI. Let’s unpack what that may, or may not, mean.

SETI is a physics research area devoted to searching for evidence of extraterrestrial intelligence. Mainly, this is done through radio astronomy for various reasons involving low cost to send an interstellar message, fairly obvious ways to stand out against background noise, reasonable knowledge of physics directing the choice of frequencies, and so on. Most natural phenomena are wide-band, i.e., smeared out over a wide range of radio frequencies. So the holy grail of this entire enterprise is to find a signal which is (a) highly localized to a specific location in the sky that tracks sidereally, and (b) is very narrow-band in the way its power is spread across frequencies. (There are other requirements, like scintillation, but we’ll gloss over the details.) 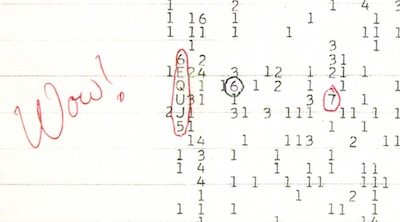 Observers using the “Big Ear” radio telescope at OSU detected a narrow-band signal coming from Saggitarius. Jerry Ehman, the astronomer on duty, wrote “Wow!” on the compuer printout, and so to this day it’s called the Wow! signal. (Time is on the vertical axis in the printout, increasing downward. The horizontal axis is for frequency bands.) There was no detectable modulation that anyone could figure out, but it was remarkably spatially localized and narrow-band.

The Big Ear telescope observed it for a time window of 72 seconds. This is to be expected: the instrument relied on the rotation of the earth to scan it across the sky, and given that rotation, a sidereal-tracking signal (stationary with respect to the stars) should be bright for about 72 seconds, with peak intensity in the middle of that interval. 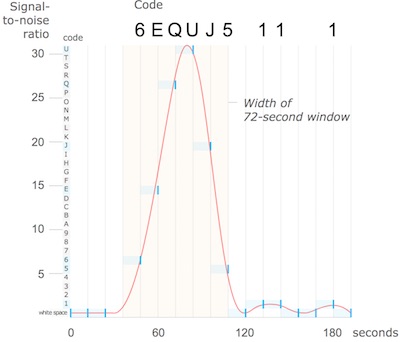 The mysterious “6EQUJ5” is an idiosyncratic way of recording the signal intensity vs time, given the instruments of the day. Each frequency band listened for 10 seconds, processed for 2 seconds, and then printed out a single character describing the average power (minus baseline) for that 10 second interval, divided by the standard deviation. (It was blind during the 2 second compute interval.)

The value reported is the dimensionless ratio of background-subtracted intensity to standard deviation (noise, basically). It frustrates me that no quickly-available source would show me the equation, but I’m guessing it was combining the average power difference between horns 1 and 2 and their combined noise in some dimensionless ratio like:

That’s printed out as a single alphanumeric character in [0-9A-Z], basically a single digit base 36. “6EQUJ5” is the series of observations at 12-second intervals of that signal-to-noise ratio. E.g., a “5” means the difference in average power between the 2 horns was about 5 times the combined noise in both horns. The “U” is about 30σ above noise, so… “wow”.

It fits a Gaussian versus time; as expected given the rotation of the earth taking the dish away from the source, it peaked right in the middle of the 72 second window of observation. It was at a center frequency of 1420.4556 ± 0.005 MHz, just above the hydrogen line. The bandwidth was below 10kHz, that being the minimum bandwidth the Big Ear’s instruments could handle, back in the day. Terrestrial sources are unlikely, since that frequency is in a protected band. (Though apparently the military does occasionally flout that protection?)

It has never been seen since. 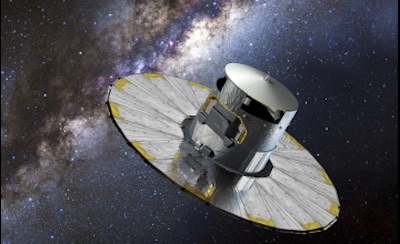 In 2013, the European Space Agency launched the Gaia space observatory. It’s measuring the position, distance, and proper motion of stars, quasars, some of the larger exoplanets, and more domestic things like comets. It does so with astounding precision. For stars, it also uses a spectrophotometer to record luminosity, surface temperature, gravity, and composition (such as metallicity).

By observing each of about 1 billion objects 70 times during the spacecraft lifetime, it is building a 3D map of objects along with their proper velocities.

Back in 1977, when the Wow! signal happened, people used the star catalogs of the day to see if there was a particular sun-like star in the 2 patches of sky whence came the signal. (2 patches because the instrument had 2 feed horns.) They found nothing of interest, meaning the star catalogs back then were quite sparse and there were a plethora of stars not really adequately characterized.

Enter amateur astronomer, Alberto Caballero, who searched the Gaia Archive for stars somewhat like our own, in the right area(s) of Saggitarius. [4] He used these filters: 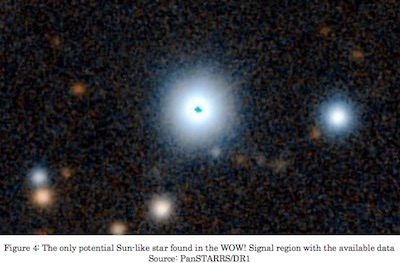 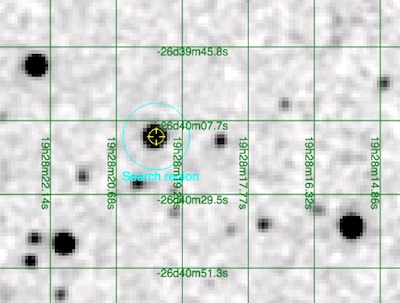 There are other candidates, depending on how you flex the cutoffs in the query, or whether you admit dim stars not catalogued, or extragalactic sources. But this is the best star with reasonable data, apparently by a reasonable margin. And even for 2MASS 19281982-2640123, we still don’t have good data on metallicity, age, stellar companions, and so on.

Maybe an exoplanet search targeting 2MASS 19281982-2640123 would be potentially interesting… even though the Wow! signal still hasn’t repeated for the last 43 years.