So, are you wondering if it’s worthwhile to bestir yourself to vote?

Unless, of course, you’re a Republican. Then you can definitely stay home. That’s more or less your party’s brand: elections are optional, authoritarians will decide for you. I mean, it’s policy: blatant gerrymandering, clearly illegal voter suppression, intimidation with armed thugs at ballot boxes, attempted murder of politician’s families… they’re authoritarian monsters. 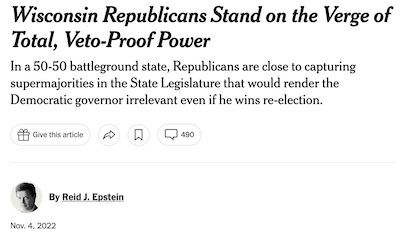 They even say the quiet parts out loud now, like women shouldn’t vote, and only Republicans are legitimate. Consider the explicit statement of the Republican gubernatorial candidate in Wisconsin, as reported by Reid Epstein at the New York Times [1]. Tim Michels, the Republican candidate for governor said explicitly, publicly, emphatically, and for attribution:

Republicans will never lose another election in Wisconsin after I’m elected governor.

So there you have it: a promise to disregard votes if the gerrymandered Republican legislature feels like it.

Republicans are fond of saying “one man, one vote”. (And nowadays, “man” seems to be the way they prefer it, since they’re wobbly on women’s right to vote at all.) In this case, they mean “one man, one vote, one time” — and then elections will be irrelevant going forward. 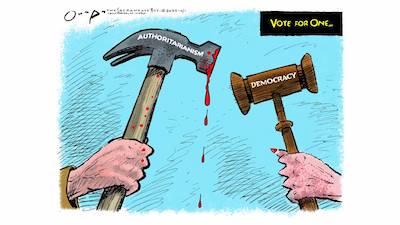 For visual thinkers, consider this editorial cartoon by Jack Ohman at the Sacramento Bee. [2] With the attempted murder by hammer of Speaker Pelosi’s husband, the phrase “hammer time in America” is especially desperate.