While the World Burns

Everybody (well, every non-Republican) in the US is mad at Democratic Senator Manchin for being the vote blocking any meaningful climate change legislation at all. Well… there are a few other things to be mad about, right? 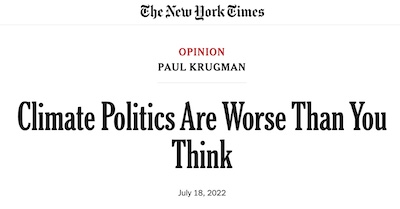 Paul Krugman writing a the NYT is our guide today. [1]

He points out that, yes, there are many reasons to be angry with Manchin:

So, yeah: pretty irritating guy. He’s only of interest for 2 reasons:

But, as Krugman points out, this misses an important point: the 50 Republican senators, marching with goose-step precision against clean energy (or really anything of public benefit). In a few months, either Democrats will gain a few more Senators, or Republicans will take control of the Senate. Either way, Manchin will then be irrelevant. His relevance is a creature of the finely balanced Senate and his last-Democrat status in West Virginia.

Manchin is small potatoes, compared to the deep and uniform Republican hostility to clean energy, fighting climate change, pandemic preparedness, or anything else that benefits mere people.

Here’s the problem, in Krugman’s summary (emphasis added, since I’m a scientist):

The fact is that one of America’s two major political parties appears to be viscerally opposed to any policy that seems to serve the public good. Overwhelming scientific consensus in favor of such policies doesn’t help — if anything, it hurts, because the modern G.O.P. is hostile to science and scientists.

And that hostility, rather than the personal quirks of one small-state senator, is the fundamental reason we appear set to do nothing while the planet burns.

Why does anyone vote Republican, for any imaginable office, under any conceivable circumstance?!