Somebody asked me, “What’s that stupid avatar on your blog?” It’s a reminder that even simple questions show infinite complexity if you look closely enough. And sometimes even if you don’t!

Suppose you want to look for the cube roots of unity in the complex $z$ plane.[1] That is, you’re looking for the roots of a simple polynomial function $f(z) = z^3 - 1 = 0$. The answer is pretty simple; there are 3 roots distributed equally about the unit circle:

But suppose, as is usually the case, you don’t know the analytical solution. You’re looking for it numerically, say by Newton’s method. This is a method much-beloved of numerical analysts, and for good reason. You start out with a guess $z_0$ at where the root might be. Then you improve it by this iteration, based on finding where the tangent intesects the axis:

Now, upon encountering this for the first time, every single undergrad in the history of forever has asked, “But where does that initial guess come from? What if I have no idea what to guess for $z_0$?” Until you know how critical the initial guess is, you simply cannot trust the output of the numerical method.

If Nature were kind, you could guess anything you like. Bad guesses might converge more slowly than good ones, but they’d all converge to the same place. (Or, in our case, one of the 3 places above.)

So: do you think Nature is kind?

Nature is not kind 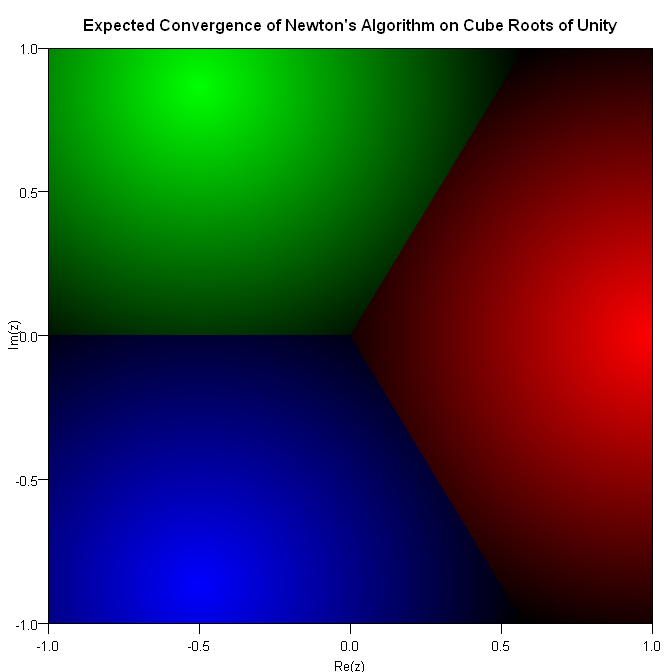 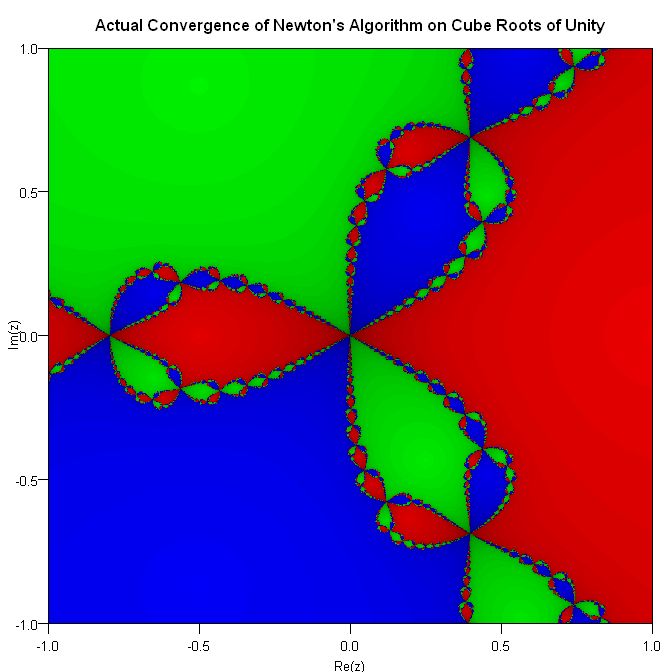 Alas, this is not what actually happens! What actually happens (reference 2) is illustrated in the second (slightly larger) figure. As before, the red, green, and blue basins converge to $1$, $e^{2 \pi i / 3}$, and $e^{4 \pi i / 3}$, respectively, as we predicted above.
But take a look at those lovely, fractal boundaries! And we’re not zoomed in here to some absurd level where we’re looking at numerical roundoff: the horizontal and vertical extents are $[-1, +1]$.

You can’t cross from red to green without encountering blue. In fact, you can’t cross from any color to any other color without encountering the third color. Think about what that means recursively: you can never cross a simple border, because if you zoom in on the border you’ll see that it’s infinite numbers borders with colors interposing between each other, forever. You can never have a simple border between these basins of attraction.

So our hapless undergrad could pick an initial guess in the blue zone at the upper right, and end up converged to the blue root in the lower left — the root that is maximally distant from the initial guess. Sometimes, you really have to understand where to start, and in some detail.

So… cope with it!

That’s why this blog uses it as a logo: the world can be complex in its details, but we can sometimes tease them apart with analysis, mathematics, and patience. What we cannot do is just ignore the complexity and hope it will go away. We have to cope with it, and since it’s built in down at the keel-blocks of reality, we cannot escape it. This is the spirit of the “Litany of Gendlin”, as it is sometimes (pretentiously) called:

The world is complicated; rather than pretending we can ignore the complexity, we should engage it.

1: This particular example is not original to me. I found it via Steven Strogatz (reference 1), who in turn provides more extensive references. ↩

Fractal boundaries: consider this . We generate the Mandelbrot set from z_n+1= (z_n )^2+c. You start with z_0 = 0, and iterate. YOu choose a value for c, .If the series does not diverge to infinity then c is in the set. Thus c=i is in the set. A problem: find a value of c near i (say within a circle of radius <.01) such that this new value is in the set. And yet this value must exist because the set is connected.

↪︎ Reply to David Wunsch
Comments for this post are closed.