Today the James Webb Space Telescope launched from the European Spaceport in French Guiana, aboard an Ariane 5 rocket. The official video from NASA is livestreamed on the NASA YouTube channel. [1] For those of you too impatient to wade through the preliminaries, the launch itself starts around 1:21:14, which is where the video embedded here will start. (But really, should you be so brave as to listen to the whole thing, you might find yourself in grave danger of learning something.)

The official NASA site for the JWST is interesting, too. [2]

While I’m slightly sad to see that the US now has limited launch capability for such a mission (6164kg launch weight!), I’m happy to see that the Europeans have a fine space facility.

The Webb is an interesting beast: conceived as a successor to the Hubble in the early 90s, construction begain in 2004, launch was scheduled for 2018, and now finally it’s on its way in 2021. It’s been a long time coming. The upside is that there’s been relentless testing of this complex instrument and how it will unfold in space and move to its final destination. Everything has to work properly the first time, since it will operate far away from Earth and can never be serviced or have its resources replenished.

Unlike the visible-light Hubble, the Webb will operate in the infrared. This is appropriate: very old things, which are now very far away because of the expansion of the universe, are now heavily red-shifted and so IR is where the action is:

So by going to infrared, we can see about 300 million years further back than we can in visible light, to probe what’s jokingly called the “Dark Ages” whose visible light is no longer visible because it’s redshifted to infrared.

And, of course, serendipity: when you look with a new method, you almost always see something new. As your humble Weekend Editor is fond of saying:

You can’t plan serendipity — give chance a chance!

But that means the JWST detectors need to operate at cryogenic temperature, and thus have an elaborate heat shield to block the sun (and for that matter, the earth) which are sources of sufficient heat to be annoying. 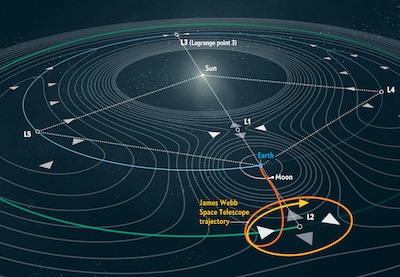 The solution is to operate (sort of) at the earth-sun Lagrange L2 point, which puts both the earth and sun in the same direction, behind the heat shield. The L2 point is unstable, so it will orbit about that point, with some station-keeping ability. The picture here (click to embiggen), from Scientific American, shows how that works.

It keeps the major heat sources (the sun and the earth) behind the heat shield, is relatively gravitationally stable, and close enough to the earth for reasonably high-bandwidth communication (S-band up: 16 kbit/s, S-band down: 40 kbit/s, Ka-band down: up to 28 Mbit/s). But… it’s a million miles away, about 4 times as far as the moon. Never gonna get serviced, like the Hubble was. Whatever’s there has to last the entirety of the 10 year mission.

So it’s important that the launch go perfectly: any use of fuel to correct mistakes here is fuel lost to the rest of the mission (insofar as the booster and the telescope propulsion interact at all).

The result so far:

Wish the JWST some good luck. It’s a Happy Christmas kind of thing, for scientists.

Or… is it? XKCD offers a more cautious interpretation (with grim mouse-over text):