Somebody asked me about the style of argument used when discussing the Talmud, a centuries-long rabbinical dialog on Jewish Law. The style involves not so much winning (though there is that), but mostly about understanding multiple points of view. Sound like something the world could use about now?

It’s an unusual question, since neither my friend nor I are Jews. I am, though, religious with as much affection for Judaism as an outsider can reasonably have… so maybe not completely unusual.

On having deeper conversations 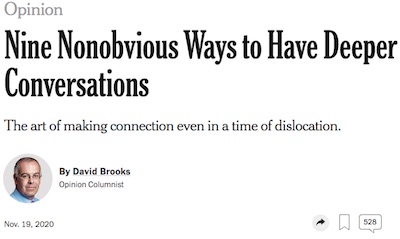 My friend was reacting to a New York Times piece by David Brooks [1] on having “deeper conversations”, particularly this bit:

Now, normally I don’t have time for guys like Brooks. I am made ill by the delusions of conservative pundits. I am enraged by the ones that call themselves “centrists”, with their banal evil and false neutrality of both-siderism [3] to avoid naming and shaming the right-wing shenanigans.

But this time… I gotta admit, this is a bit of all right. My friend described his reaction thusly:

I found this paragraph fascinating in ways I am still carefully unwrapping, as I would delicately unfold tissue paper holding an object of great value that belongs to history and not to me…

How might it have come to pass that Jews have learned the art of learned argument from a viewpoint of mutual respect, and how might their example teach the rest of us?

Architecture of a Talmud page 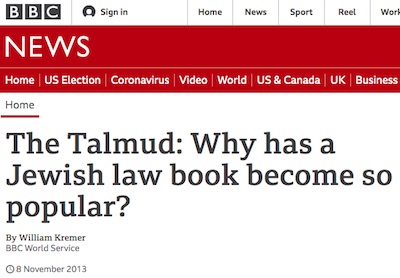 The Talmud appears, to this non-Jew, to be something of an artifact engineered to do exactly this. Unlike the Torah, with its magisterial pronouncements, the Talmud is a series of arguments in conversation with each other over the centuries – mixed with no small amount of stories and jokes. An excellent BBC News article by William Kremer [4] illustrates this with the anatomy of a typical page: 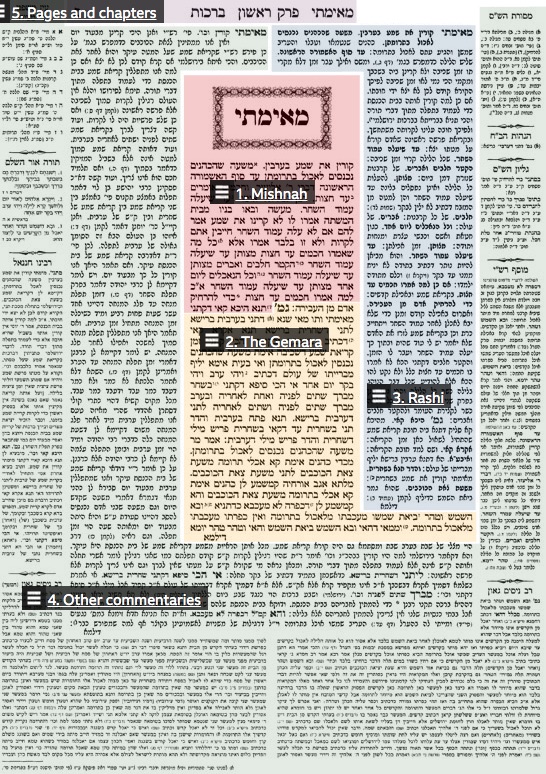 Kremer consults Gila Fine, editor-in-chief of Maggid Books in Jerusalem on her experience as a woman studying Talmud (usually restricted to men among the more Orthodox):

Unlike the lofty, magisterial prose of the Torah, she found the Talmud to have “all the imperfections, the trivialities, the multiplicity of voices, the wild associations - everything that characterises human conversation.”

But Fine eventually fell in love with the book and is now overseeing the publication of a new edition. She relates in particular to the Aggadah, the folkloric stories in the Talmud, which rub shoulders with the dense, legalistic Halakha text, and seem sometimes to subvert it.

“You have stories of women who criticise men, of non-Jews who put Jews to shame, of poor simple folk who make a mockery out of rabbis - there’s something very liberated and liberating about Aggadah,” she says.

On arguments to sharpen our (mutual) understanding

So the Talmud encourges argument because it is an argument in some ways: the very page layout tells you this. It is conducted over millennia, via commentaries written by the deepest scholars of the Law, with lots of stories and jokes along the way… and you’re invited to join. Because it’s a little more speculative, sometimes crazy, it invites discussion in a way that the majesty of the Torah does not.

It’s a respectful argument because the goal is not to dominate all the other viewpoints, but to understand all the other viewpoints in their full complexity and multiplicity. None of the predecessor commentaries came to universal agreement, so why should you? Your partner is not wrong; you’re just trying to add another aspect to your mutual understanding. The world is, after all, not simple, so neither is our spiritual understanding of it.

(With all the cross-references, one might argue that it is an example of early attempts at hypertext. I’ve also heard this claim made about Thomas à Kempis’s 15th century book, De Imitatione Christi [5]: each chapter is 1 page on 1 topic, with cross-references to many other chapters. In fact, my introduction to De Imitatione Christi was via Hypercard in the late 80s.)

Ok, if we’re going to mention the folklore and jokes in the Talmud, we have to talk about Scott Alexander’s novel, Unsong. [6] It takes ideas from the Talmud and asks, “What if the world was literally like that?”

… and a lot of even crazier stuff. (Uriel says: “PLEASE DO NOT BLOW UP MOUNTAINS. IT NEVER HELPS.”)

Trust me: if you’re interested in Jewish thinking, it’s utterly hilarious. Even if you’e not, it’s still pretty funny.

What does that say about American politics?

Of course, to have a properly respectful dialog as in the Talmudic tradition, it takes both sides being committed to that attitude. You can’t have Talmudic dialog with a fanatic who denies your right to exist, or the fundamental legitimacy of your ideas. That would be like the Israelis attempting Talmudic dialog with Hezbollah, for example: respectful dialog is the wrong response to someone who denies your right to exist. I see nothing but venom, rage, and contempt coming from the American Republican right at the moment; respectful dialog is not even remotely the correct response to Trump.

This is why I’m so frustrated with the mindless both-siderism of people like Brooks: his article makes an excellent point, but one which is of no applicability when attempting to talk to Republicans. The time for respectful dialog will come, when there is mutual respect. Though probably not with this version of the Republican party.

We should all live so long. (No, really: we should.)

1: D Brooks, “Nine Nonobvious Ways to Have Deeper Conversations: The art of making connection even in a time of dislocation”, New York Times, 2020-Nov-19. ↩

2: L Barrett, “How Emotions are Made: The Secret Life of the Brain”, lisafeldmanbarrett.com, retrieved 2020-Nov-29. ↩

Great article, Weekend Editor. I like the colored graphic of the page from the Talmud. It helps me visualize things better. And of course, I’ve always enjoyed your humor!

↪︎ Reply to Kirk Dearden
Comments for this post are closed.