So, today I voted.

Yes, Vote By Mail. But Not By Mail… By Dropbox. 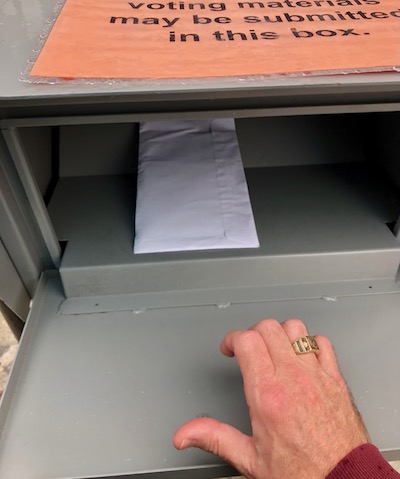 I requested a mail-in ballot, as a way to get a reminder to vote. However, given the political mischief with the US Post Office [1], I didn’t want to have to trust them.

So I deposited it directly in my town clerk’s drop-box, as shown here.

Fortunately, I didn’t have to cope with armed idiots wearing tactical BS “guarding” the dropbox to make sure only the people they liked could vote. Apparently that’s a thing again, here in the US. The racist South has infected Republicans in the red states to attempt voter suppression with guns. (Here in Massachusetts, we’re pretty suspicious of gun people.)

I could vote as anti-Republican as I pleased – and it pleased me a great deal – then deposit it securely with my town clerk.

Go thou and do likewise.

Remember: No Republicans! Not ever. Not for any imaginable office. Not under any conceivable circumstance. Never.

Being the anxious sort that I am, and being suspicious of how organizations work & don’t work, I kept checking the status of my ballot. The Secretary of the Commonwealth maintains a web site where you can check the status of your mail-in ballot.

Mine is shown here, as of now (2022-Oct-27 @ 12:37pm EDT US). It used to say “not returned”, meaning they’d mailed it to me but I hadn’t done anything about it. (In my defense, I was in Japan at the time!) Indeed, it still said that as of this morning. But now, as of mid-day, the town clerk workers have emptied their dropbox, sorted through things, scanned the barcodes, and put my ballot in the queue to be counted (either now or on election day; I forget which way it goes here).

So: ballot locked & loaded, ready to be discharged against all Republican candidates when the time comes.

Why does Louis DeJoy still have a job as postmaster general? How hard can it be to fire an obviously corrupt Trump appointee who crippled postal delivery capability by selectively sabotaging blue districts? How is that not seditious conspiracy, as well? ↩