When Was the Norse Settlement at L'Anse aux Meadows in Newfoundland?

Hey, let’s think about something that’s not COVID-19! Like, for example: when exactly did the Norse settlement at L’Anse aux Meadows in Newfoundland happen?

How long Europeans have been in the Americas

This used to be a simple question when I was in primary school: how long have Europeans been in the Americas? It was a frequently asked question, becase it tested 3 things:

It’s also the sort of thing that turns kids off to history. They think it’s a bunch of tedious memorization of dates of doubtful relevance to be regurgitated at the appropriate moment for teachers and tests of doubtful motives. And indeed, that’s true for how history is usually taught. There’s none of the reason why people did things, or refused to do other things: food, territory, power, marriages, slavery, spices, cloth, … all kinds of things that are interesting and relevant get pressed out of the pablum fed to kids.

The other half that still frosts me is that we used to idealize Columbus, when even a kid could look at the facts and realize this was a terrible, terrible man. He introduced slavery of the most vicious sort, began the process of decimation of Native Americans and generally started the European destruction of 500 or so nations that were just in North America alone.

Besides, after a while, it got around that Leif Erikson’s kids got here earlier anyway. And unlike Columbus, they sort of took a look around, shrugged, and left. There was no damage to Native American culture. (The story with Greenland and the skrælingi was, of course, another matter. That, along with a cooling climate, eventually led to the abandonment of Greenland.)

That brings us to the question: how long exactly since Europeans began exploring North America? 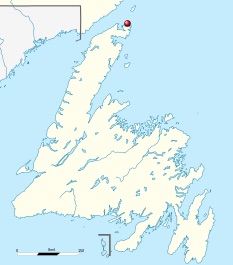 One of the earliest (maybe the earliest) site of undisputed Norse settlement is L’Anse aux Meadows on the northern tip of Newfoundland.

So… when exactly was that?

That brings us to a Nature paper by Kuitems, et al. [1] which actually answers that question in a very satisfying way!

The usual methods one would try here are dendrochronology and carbon-14 dating:

That’s… nice, but Kuitems et al. decided to do better!

What if you could combine carbon-14 dating and dendrochronology? If you had a strong reference year when carbon-14 was high world-wide, due to some sort of radiation event all over the planet, then you could find tree rings that match and work outward from there. 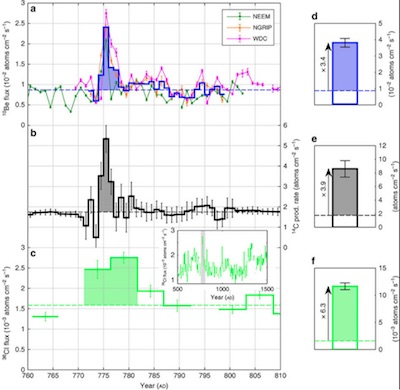 Fortunately, there are 2 events that pretty much fit the bill. There were carbon-14 “spikes” in 774CE – 775CE and 993CE – 994CE. Since there’s an increase of beryllium-10 as well, the origin is probably in a massive solar storm. Massive solar aurora observations were recorded in late 992CE in Korea, Germany, and Iceland: a planet-wide event. 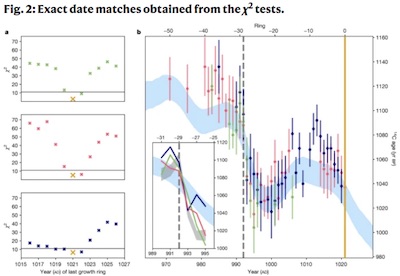 By identifying which ring in their sample was the 993 spike in C14, it was mostly a matter of counting outward to the outermost bark ring to determine the year the tree was felled. Identifying the 993 ring was done by minimizing a $\chi^2$ statistic.

The value of $x$ is chosen to minimize $\chi^2$, and this is what’s shown in Figure 2a with a sharp minimum indicated.

While the details are interesting, Figure 2a from the paper shows that there is absolutely no argument about where the date of tree felling should be placed: 1021CE, exactly, across multiple samples. (By looking at the structure of the outer ring, one can even determine that it was springtime!)

They went to a lot of other effort to compare this result with sources like the Icelandic Sagas: an oral history that was written down a couple centuries later. Bottom line: it’s all consistent.

So, if you’re a primary school student today and your teacher asks you how long have Europeans been exploring North America, what should you answer?

In this year of 2021CE, you should maybe look at your phone to get the time of day as a little extra florish, and then answer “exactly 1000 years, perhaps 6 months more if the trees at L’Anse aux Meadows were really felled in the spring, given that it’s now November.”

You’re still gonna get sent to the principal’s office for the crime of smartassery. No way around that. But it’ll be satisfying to know you can prove your answer was right by referring to the scientific literature, yes?

I mean: if you’re gonna be a smartass, why not go all the way and do it right?