The Madness of Texas Abortion Vigilantes

Texas passed an abortion ban at 6 weeks, in defiance of Federal rulings that they cannot do this before fetal viability (about 25weeks). How did that happen?

Well… it is Texas, after all

Here in much of the US when people say we’re crazy, we point at the American South. In the South when people tell them they’re crazy, they point at Texas. (And occasionally Florida.)

Periodically the red states pass abortion bans in defiance of the Constitution and federal law, which the Supreme Court then strikes down. It’s a sort of political theatre.

What’s different here is that the Texas law does not require state officials to enforce it. Instead, it allows private citizens to sue anybody who provides an abortion beyond 6 weeks (before most women know they’re pregnant), or anyone who helps (nurses, receptionists, ride-share drivers, …). There are even bounties offered for tips leading to successful prosecutions. This apparently monkey-wrenches federal review, since there is no visible state official to sue. The Supreme Court refused to review it on those grounds, saying it had to be enforced and the victim had to appeal/sue before they could do anything. (And given the extreme conservative bias of the current Court, the result there would be doubtful anyway.)

It looks to me like an invitation to vigilantes, or even the “informer” culture of the East German Stasi. But then, I’m just some liberal with firm opinions and a blog. What do actual historians think?

Consider Joshua Zeitz: PhD from Brown, former professor at Harvard, Princeton, and University of Cambridge; contributing editor at Politico and the New York Times. Not exactly the “firm opinions + blog” type; more like somebody to whom it’s worth listening. He had this to say: 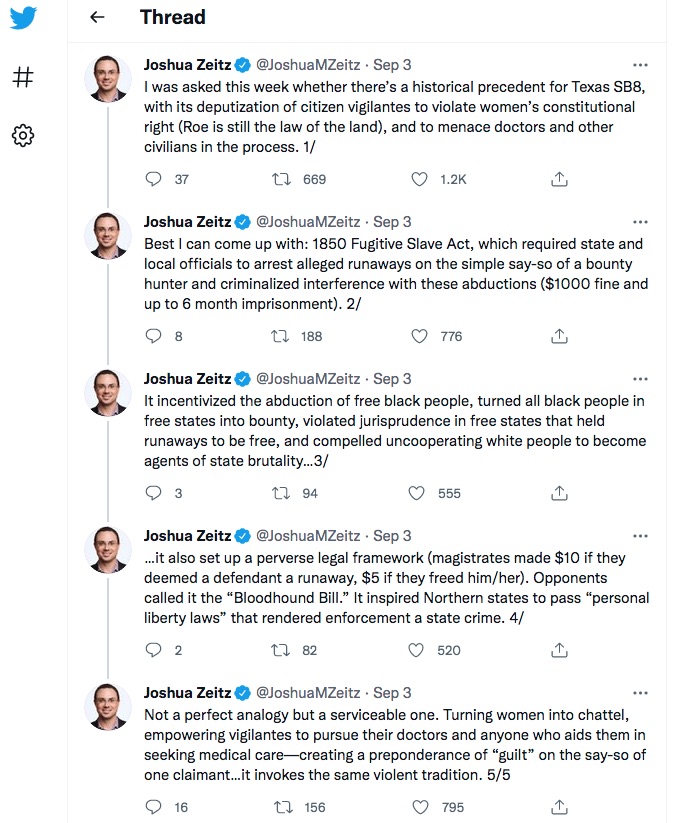 Required legal action on the say-so of a single random person, perverse financial incentives like bounties, turning people into objects to manipulate, compulsory participation in state brutality, a violent history… it sure ticks all the boxes doesn’t it?

One consequence: Scott Aaronson, a prominent quantum complexity theorist formerly of MIT and now of UT Austin, said that it’s difficult now to recruit anybody to come join the faculty at UT Austin, especially women. He compared it to trying to recruit for Kabul University in Afghanistan. [1]

The Fugitive Slave Act of 1850 is described in Wikipedia as “arguably the most hated and openly violated piece of federal legislation in the nation’s history”.

And so it seems to be here.

Today in the venerable Globe came an article by even more venerable law professors Laurence Tribe and David Rosenberg. [2]

Whatever force one attributes to Supreme Court precedent, it must be followed unless and until expressly overruled. To turn a blind eye to the blatant departure from its own precedent, as the Whole Woman’s Health decision did, is for the court to deny its own legitimacy and invite chaos to replace the rule of law. Neither the Justice Department nor private litigants can ignore the illegality of granting bounties willy-nilly to private individuals for their own benefit, an unconstitutional money-making scheme if ever there was one.

Yes. More of that, please. Attorney General Garland, are you listening?