Which Arm Gets the Booster?

A burning question for everybody who’s gotten a booster, or wants one: the same arm, or the other arm?

But the question everybody, apparently, wants to know: should we get the booster(s) in the same arm as the original, or the other arm?

Delthia Ricks first brought it to our attention: 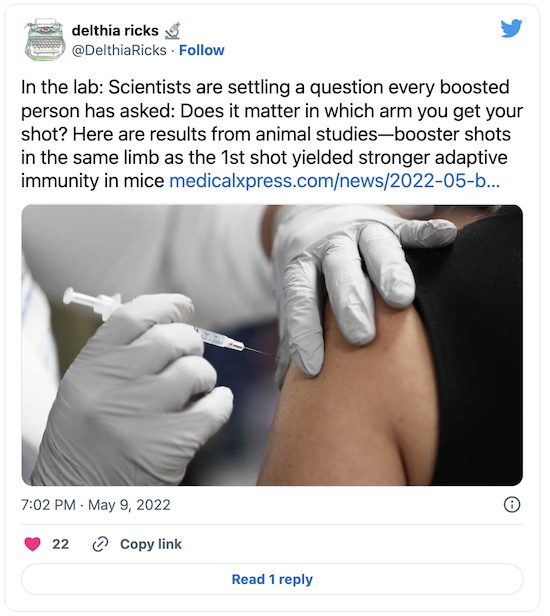 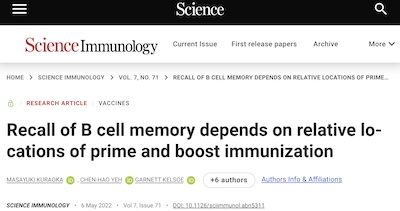 That pointed us at a summary article in Medical Xpress [1], which dropped enough hints that we could find the actual research paper in Science Immunology. [2]

Some of the high points:

So basically, hitting the same GC in the same limb reactivated local memory B cells and got a superior response. Slightly. It didn’t seem to be a big effect.

So that’s what they said. Only with graphs. And statistics.

I’m being a little funny here, because most of what they measured was not statistically significant, and it makes me wonder if they just kept hunting until the found something that was, regardless of the experiment design. (See p-hacking, upon which we generally frown!)

Still, the results are pretty consistent with what we expect: it mostly doesn’t matter until you look really closely. And even then, maybe not. So it’s a nice little paper on a nice little issue. In terms of actually catching COVID-19 vs not, it probably makes no difference.

The main thing that does make a difference: get vaccinated, then get boosted.

All else is commentary, to quote R Hillel in another (wonderful) context.

1: B Yirka, “Booster immunization in same limb as the first shot yielded stronger adaptive immunity in mice”, Medical Xpress, 2022-May-09. ↩