On kids and vaccines: ending the pandemic

If you think we can end the pandemic without vaccinating kids because they tend not to get so sick… think again. Try harder this time. 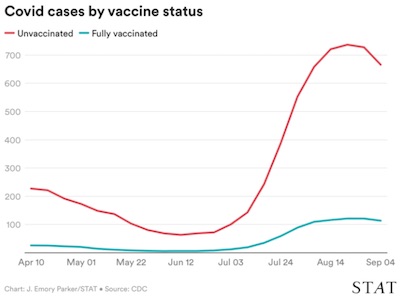 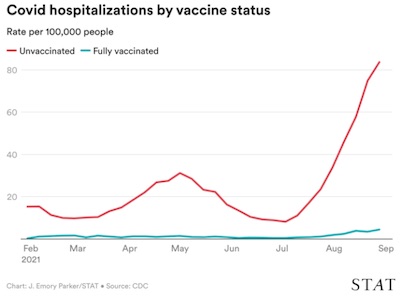 Not all COVID-19 waves are alike. Today from Eric Boodman at STAT News [1] comes evidence that the Delta wave is indeed different, partly due to the amount of vaccination, but also due to the concentrated populations of vaccine hesitant who are causing the outbreaks.

As the 2 figures here show, COVID-19 case rates and hospitalization rates are very, very different among the vaccinated and the unvaccinated.

The unvaccinated are almost completely driving the continuing pandemic.

But since vaccine hesitancy isn’t randomly distributed in the population, this has led to weird risk effects in various subgroups:

Conclusion: Pools of unvaccinated people cluster together, and thus expose each other more so they are the current drivers of infection.

Ok, so some of those pockets of unvaccinated are just unreachable: the white, less educated, rural Republicans are as fact-resistant as you can imagine, so there’s not much we can do to help them.

But other pockets are more reachable, such as kids. Is there evidence they’re actually a driver, so a vaccination campaign among kids would actually move the needle on ending the pandemic?

Yes, according to a paper I saw because of tweets from the estimable Eric Topol and Bernard Lee: 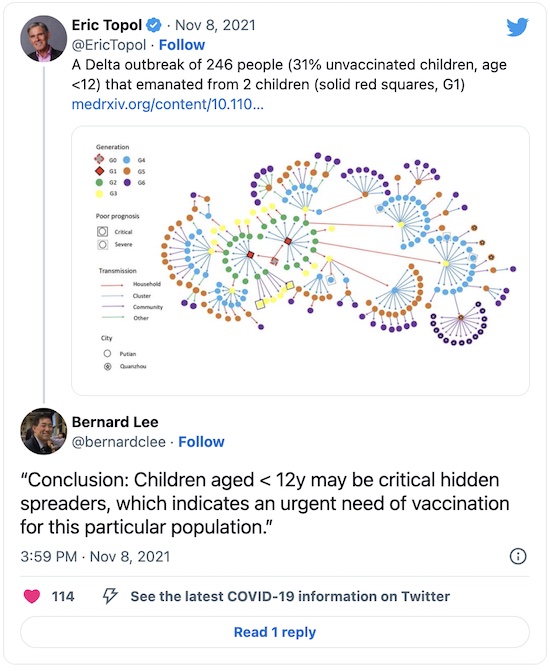 Hmm. That looks like a contagion graph of a COVID-19 outbreak, 246 cases, driven originally from 2 kids who spread it to about 75 other kids and then to adults. That seems to be a pretty good example of a pocked of unvaccinated folks (kids in this case) who drove an outbreak. Lee picked out the final sentence of the abstract, noting that kids are an important population of “critical hidden spreaders” who are in “urgent need of vaccination”. 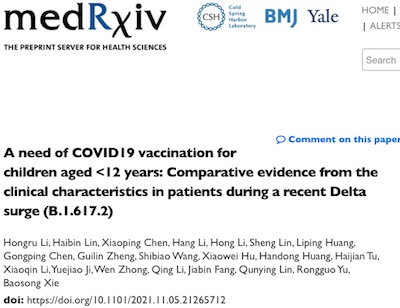 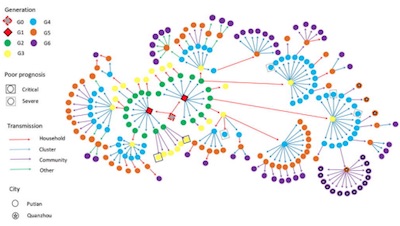 Ok, let’s look at the paper: it’s a preprint on medRχiv by Li, et al. [2] They studied a population of school-age kids under 12 in China, and their relation to PCR-confirmed cases of Delta COVID-19. They did the usual contact tracing, and that resulted in the graph shown.

So, yeah: if we don’t vaccinate school-age kids, they’ll pick up COVID-19 from exposures at school and spread it first to each other, then to everybody else. The pandemic will not stop until we vaccinate spreader populations like this example!

Conclusion: Children aged < 12y may be critical hidden spreaders, which indicates an urgent need of vaccination for this particular population.