The Madness of Vaccine Resistance

Have a quarter of us gone mad? It would seem so…

The madness of the American right

I always suspected they were crazy, starting in the 1980s when it finally dawned on me that Reagan had utterly ceased making sense. After that it was just a steady decline, as all the competent advisors abandoned ship and Congress lurched to the right with Gingrich, et al. Then came the full, florid delusions of Trump. All of a piece.

But it seems that the vaccine resistance – overwhelmingly Republican – is a bizarre self-parody. It’s not just suicidal, placing themselves at risk; it’s also psychopathically anti-social, placing everybody else at risk as well. 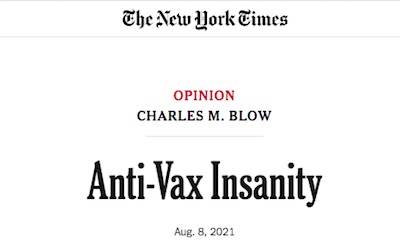 Charles Blow wrote a piece in the New York Times that pretty much reflects my view. [1] Never let it be said he “buried the lede”, with opening paragraphs like this one:

Nothing better exemplifies the gaping political divide in this country than our embarrassing and asinine vaccine response. Donald Trump’s scorched earth political strategy has fooled millions of Americans into flirting with death. And now thousands are once again dying for it.

That sums it up: people are dying because of delusional right-wing ideology.

Why were Americans turning away a vaccine that many people in other parts of the world were literally dying for? Many did so because of their fidelity to the lie and their fidelity to the liar. They did it because they were — and still are — slavishly devoted to Trump, and because many politicians and conservative commentators helped Trump propagate his lies.

If slavish devotion to conservative madness is the cause, perhaps a slave rebellion against the conservative oligarchs is in order? Or at least against the structures they use to enforce minority rule: gerrymandering, electoral college, unequal Senate apportionment, …

It was all lunacy. It is all lunacy. This should never have happened. There are people dead today — a lot of them! — who should still be alive and who would be if people in the heights of government and the heights of the media had not fed them lies about the virus.

But apparently, after you get so used to so much blood on your hands, you forget — or make yourself forget — that you weren’t born with red palms.

So, we have a situation in America where people are dying and will continue to die of ignorance and stubbornness. They are determined to prove that they are right even if it puts them on the wrong side of a eulogy.

This is like watching millions of people playing in traffic.

I have my problems with the media, and in some ways especially with the NYT’s both-siderism. But this opinion piece really hit the nail on the head. (And I like the turn of phrase: “puts them on the wrong side of a eulogy”. Though I don’t like the fact that it was necessary.)

Look, is it really that bad?

Consider this from Adam Sternbergh, a novelist and NYT editor, who apparently runs special projects at the Times, among many other things: 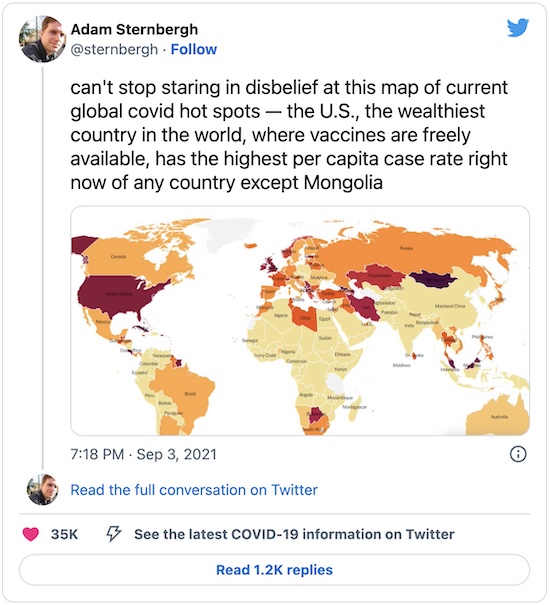 Yes, it’s really that bad: we’re wealthy, vaccines are abundant and freely available to anybody with the wit to ask for one… and we’re 2nd worst in per-capita COVID-19 cases, after Mongolia. Mongolia may be excused because they are poor and don’t have an abundance of vaccine doses. We, on the other hand… are apparently just stupid, suicidal, or psychopathically anti-social?

And it’s not uniformly distributed, as a property of Americans in general: 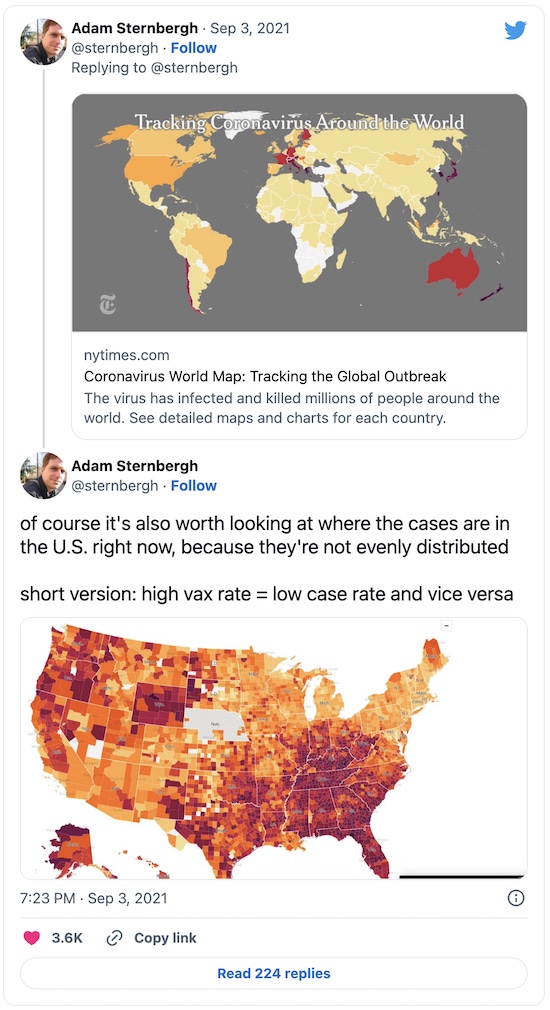 It’s concentrated in South in the former Confederacy states, with some echoes from the inter-mountain West. In other words, the reddest, Trumpiest states.

Trump wanted to build a wall. I may be coming around to his point of view, provided it can be built further north, say around the Mason-Dixon line. That seems to be the border of the America that’s still recognizable to me as America.