Comparing the US COVID-19 Pandemic to Other Countries

How’s the US pandemic doing in comparison to other countries, particularly those that Republicans love to diss?

From Morning Consult comes this comparison of vaccination rates (vaccinated, planned, uncertain (how can anybody be uncertain?!), and unwilling): 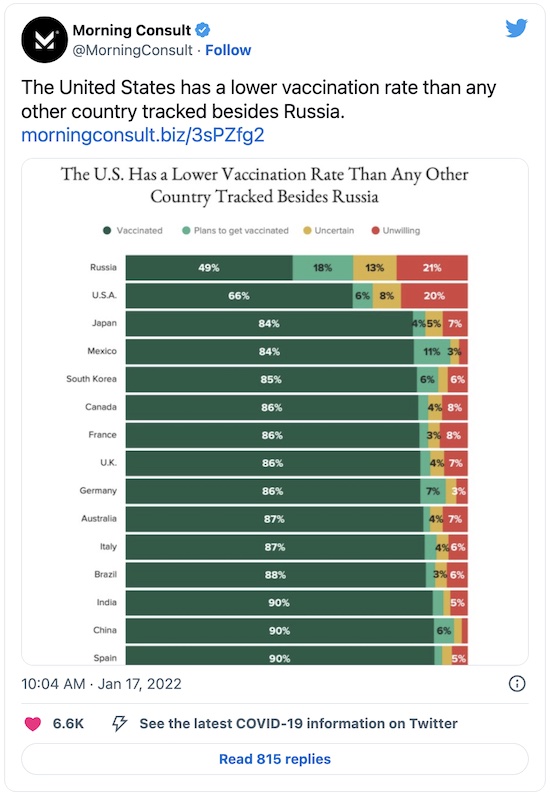 Well, it’s always good to see that the US is keeping up with the Russians… except that this is not in a good way!

How can that be?!

Both Russia and the US have about a 1/5th of their population who are outright vaccine defiant. Now why can that be… what do the US & Russia have in common? Ah: I know. We both have dominant propaganda channels in our media, feeding us nonsense!

With that much intellectual sewage pumped under high pressure into American minds, particularly in rural areas, it’s surprising only 1/5th of the population is insane.

Look at the nation just below the US: it’s Japan, a country with which we have significant involvement here at Chez Weekend. They’re 84% vaccinated vs 66% in the US; only 7% of Japanese are vaccine defiant vs 20% in the US. Their case rate is dramatically lower.

Also, it’s interesting to look at a couple other countries on that list.

Let’s start with Mexico. In spite of being poorer and having an unending drug war with the narco traffickers, they are very sensibly at 84% vaccinated, and a negligible fraction who are vaccine-defiant. And Mexico is, by and large, more religious than the US, so using “religion” as an explanation of US vaccine defiance is just dumb. 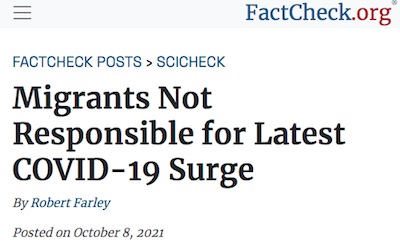 The other thing that comes to mind is repeated racist, xenophobic Republican claims that Mexicans are surging over the border bringing COVID-19, so… something something something. Inevitably, “Trump’s Wall” is invoked. This is, of course, not just false, but laughably false, as FactCheck.org reminds us [1]:

A recent survey by the Kaiser Family Foundation found that 55% of Republicans say “immigrants and tourists bringing COVID-19 into the U.S.” is “a major reason for the current high number of COVID-19 cases in the U.S.”

Among unvaccinated adults, 40% listed “immigrants and tourists bringing COVID-19 into the U.S.” as driving up the COVID-19 case counts.

They go on considerably in that vein, quoting vile Republican politicians like Florida governor DeSantis, Iowa governor Reynolds, and Texas governor Abbot. All of them spewing racist, xenophobic nonsense straight into the anry id of their base voters. Who are, it needs reminding, very base indeed.

FactCheck.org goes to some effort to debunk this notion, including looking at phylogenetic data on the viral genomes to show that the spread is, if anything, going the other way from the US to Mexico and South America:

“Instead, the rise in cases in the USA has largely been tied to Delta, which was very likely introduced from the UK and India initially, and probably from other countries across Europe and then the world soon after, as it spread relatively rapidly,” Hodcroft told us. “Delta actually expanded comparatively late into South America, possibly because of much less close ties to the UK and India, and so is very unlikely to b e the source of Delta for the USA.”

In fact, there is a much better explanation for COVID-19 hot spots in the US: they are conservative Republican areas with low vaccination rates. Self-inflicted wound, that.

Hey, what about France? Conservatives hate France, thinking of it as some European socialist hellhole, right? I worked many years for a French company, and have nothing but respect for my French colleagues and the very strong French work ethic: I could call Paris in the late afternoon on the US east coast, and could almost always reach French scientists, working late. So I have another rather different opinion about France, but let’s see what the data say.

Still, France is on the Morning Consult list above at 86% vaccinated and only 8% hard-core vaccine defiant. How’s their situation working out, with their enviable tendency to social democracy and capitalism regulated out of its worst tendencies? 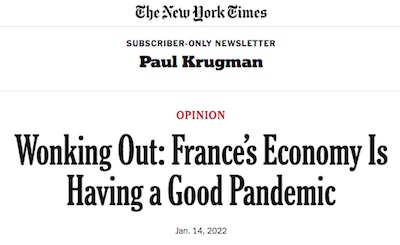 No screwing around here: let’s consult the big guns. In this case, our big gun is Paul Krugman, the Nobel laureate in economics, writing in the New York Times. [2]

US media on the French economy is relentlessly negative (Krugman quotes NYT’s Roger Cohen: “America’s favorite European basket case”). But in fact, France has been a stellar economic example among developed nations during the pandemic. We have a number of conservative ideology-inspired fantasies about France, such as that they hate the Internet when in fact they have deeper broadband penetration and at better (non-oligopoly) pricing than the US.

Conservative delusions demand that France should collapse because of tax rates, social regulation, and spending on human needs. Yes, French taxes are high and salaries are lower than in the US. But, as my French boss once explained: he never has to worry even a bit about health care, very high-quality university educations for his kids are extremely cheap, retirement is not a worry because of inflation-adjusted pensions, and in general there’s just a lot less economic tension. Yes, their GDP/person is lower than in the US; but this is a choice to work a bit less and live a bit more. They take their vacations (ask I can attest from direct observation), and for Americans working for French companies they pretty much insisted we take our vacations too. 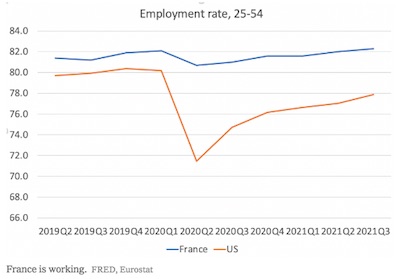 France has dramatically less unemployment than the US, not more, as the Republican fever dream holds. Krugman shows us the grap of employment fraction of ages 25-54 over the pandemic (data from FRED, Eurostat).

Krugman’s conclusion, which I endorse (for what little that’s worth; emphasis added):

I don’t want to romanticize the French economy or French society, both of which have plenty of problems. And liberals who like to imagine that we could neutralize the anger of the white working class by raising wages and strengthening the social safety net should know that France, whose policies are to the left of U.S. progressives’ wildest dreams, has its own ugly white nationalist movement, albeit not as powerful as ours.

Still, at a time when Republicans denounce as destructive “socialism” any effort to make America less unequal, it’s worth knowing that the economy of France – which isn’t socialist but comes far closer to socialism than anything Democrats might propose – is doing pretty well.

We should aspire to do likewise.