Some Unexpected Inspiration on Russia & Ukraine

Today I came across an unexpected source of encouragement in the matter of Russia and Ukraine. 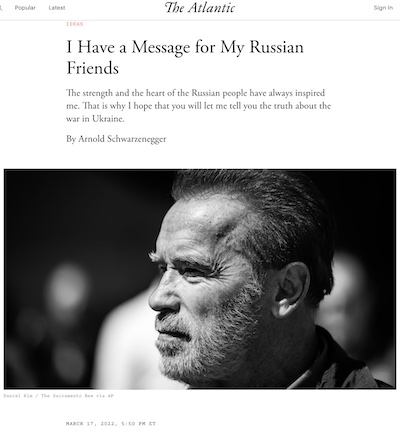 Umm… Arnold Schwarzenegger as a source of political and even spiritual inspiration? Really?!

Yeah, really. Honest, it surprised me too.

I never had much use for the hyper-masculine image of bodybuilders, or sportsball players of any sort. And Terminator & Conan were… well, not that great as movies. And then he became Republican politician, so he’s sorta outside my regular feeding grounds, ya know?

But we must be prepared to accept wisdom from any source. We must be especially eager to recognize wisdom when it comes apparently from the “other side”, which turns out to be the same side after all.

And so it is here.

Schwarzenegger made a heartfelt plea on a YouTube video, which then got tweeted, and The Atlantic picked up the transcript as an article. [1] Some of the high points, of which there are surprisingly many in just 9min 16sec:

It takes a lot to bring tears to my eyes at the words of a former athlete in a sport I don’t like, turned actor in movies I don’t like, turned politician for a party I don’t like. But… give it up for The Arnold, because looking into his eyes at those two moments did it. There’s an awful lot of compassion for the pain of others, and a desire to help them do better. This is as we should all feel toward each other.

Seems to me like a very good message. I’d be fascinated to know what my Russian friends think of it.

And that’s not the first time he’s hit the nail on the head. Here’s a video he recorded after the events of 2021-Jan-06, when American Nazi sympathizers attempted to disrupt the official counting of the Electoral College. It’s very personal: “I grew up in the ruins of a country that suffered the loss of its democracy.”

Ok, I changed my mind: this is a smart man, and a good man. I’m happy to listen to him when he has something to say in his areas of expertise.

(Well, maybe not on body-building. I mean, he’s an expert at that, I’m just not interested. But the other stuff, yeah. Good guy. Not perfect, of course, what with a couple extramarital affairs. Still, good for many purposes.)

I’m very, very happily surprised. Feel free to make fun of me for not already knowing this. I promise it’s ok, making fun of me for good purposes.