Today I found 2 interesting takes on the Trolley Problem.

It’s possible 1 or 2 of you haven’t watched The Good Place. (Get on that, would you? Unlike most American television, it’s actually worth your time. Thanks to a young millennial friend for recommending it to me, and insisting.)

The Trolley Problem was invented in a 1967 paper [1] by philosopher Philippa Foot. She was discussing something called the “doctrine of double effect”, or how to assess the morality of actions that have both good and bad results. The Wikipedia summary:

There is a runaway trolley barreling down the railway tracks. Ahead, on the tracks, there are five people tied up and unable to move. The trolley is headed straight for them. You are standing some distance off in the train yard, next to a lever. If you pull this lever, the trolley will switch to a different set of tracks. However, you notice that there is one person on the side track. You have two (and only two) options:

Which is the more ethical option? Or, more simply: What is the right thing to do?

The 2 actions both have good and bad consequences. Variations on this problem let us explore the nuances (and traps) of our utility functions. Increasingly absurd variations can really twist your mind around; see The Good Place above for examples.

As with all “problems”, there is not really a clear solution. If there were a solution, after all, we wouldn’t call it a problem!

This, of course, does not stop people from trying. Some of the “solutions” are brilliant, and some are just silly. Occasionally, they are both (click through to watch the video of the “dual track drifting solution”): 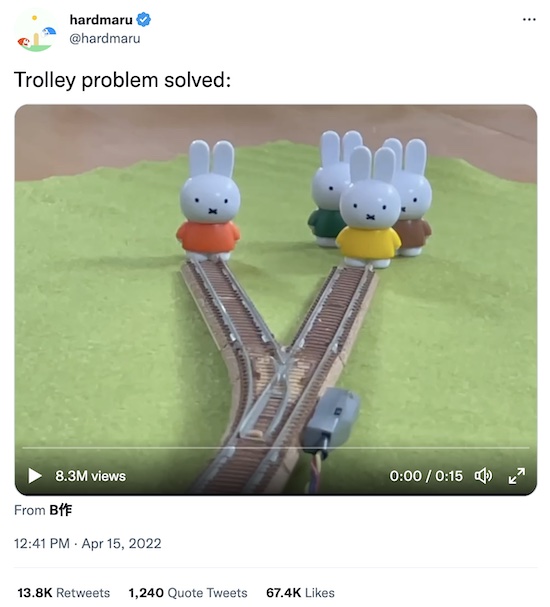 This “solution” was, of course, immediately repurposed for other humor needs. Here’s one about the complexity of programming, were often we don’t have a bug when we know we really should, and don’t know why (again click through to watch the video):

Trolley Problems, even with their absurd variations, force us to confront what we value. It’s hard to craft a utility function that accurately describes our values, while not forcing us into doing something horrible.

… while sometimes enjoying the surreal variations.

1: P Foote, “The Problem of Abortion and the Doctrine of the Double Effect”, in Virtues and Vices (Oxford: Basil Blackwell, 1978). Originally appeared in the Oxford Review, Number 5, 1967. ↩