Too Much AND Too Little COVID-19?!

Recently 2 Trump-appointed judges in the US have ruled that they can overturn Biden policies because there is simultaneously too much COVID-19 and too little COVID-19. They’re not even pretending to be rational any more.

Too much AND too little COVID-19?!

It came to my attention this way, from a chaired professor of social science at NYU, who might thus be suspected of knowing what he’s talking about re social policy: 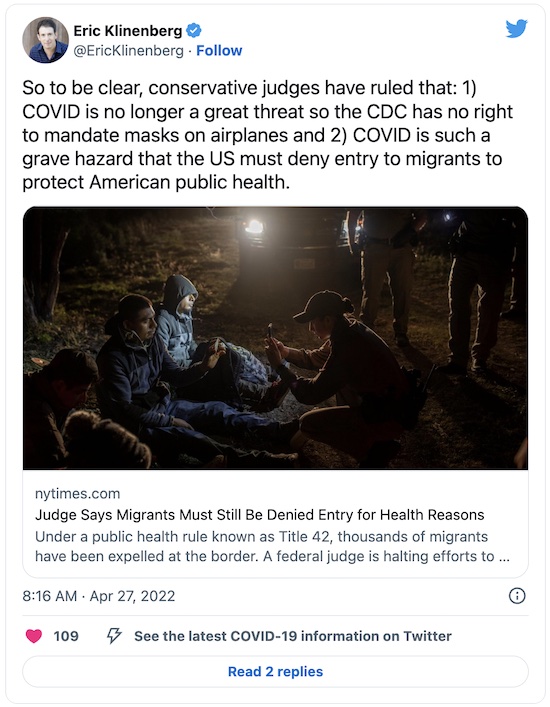 So let’s unpack for a moment what he’s talking about. Following The Hunting of the Snark, this is an agony in 2 fits:

Fit the First: Serious COVID-19 Risk as an Excuse to Block Migrants 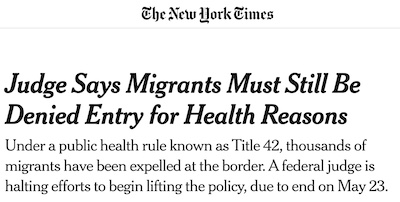 Jordan & Sullivan have a pretty good explainer in the NYT. [1]

Let’s face it: Republicans are xenophobic, which causes them a great deal of anxiety about immigration, legal or illegal.

This in spite of a ruling from the Centers for Disease Control and Prevention saying otherwise: the gut feeling of a Republican judge is more important than scientific judgement.

Fit the Second: Trivial COVID-19 Risk as an Excuse to Block Mask Mandates

Let’s face it: Republicans hate public health measures like masks and vaccinations, apparently viewing them as government over-reach trampling on their freedoms. These are of course “freedoms” to infect others, which is just straight-up crazy, but that’s what they say.

Savage & Murphy have a good explainer in the NYT. [2]

Again, the gut feeling of a Republican judge trumped the CDC so a conservative policy could be forced onto the rest of us.

These are not serious people. They are, however, power-hungry. They are willing to bend facts forward (“Too much COVID-19? Close the borders!”) and backward (“Too little COVID-19? Off with their masks!”) in favor of their policies, with no respect for truth whatsoever.