The variants are starting to pile up. Unless we vaccinate everybody faster, there are going to be variants which evade vaccines and then we start all over. How close are we to that?

Things are getting worse: cracks in the dam are appearing, but the dam has not yet burst.

For example, a summary report from Forbes [1] (and yes, this is not exactly a qualified medical new source, but we have what we have) quotes Rochelle Walensky of the Centers for Disease Control and Prevention as saying in a White House briefing that:

Just so you can see how unequal it all is, look at the map. Ashish Jha is the head of the Brown University School of Public Health. Note well his comparison of the different paths to “success” taken by the very few states that are in good shape: 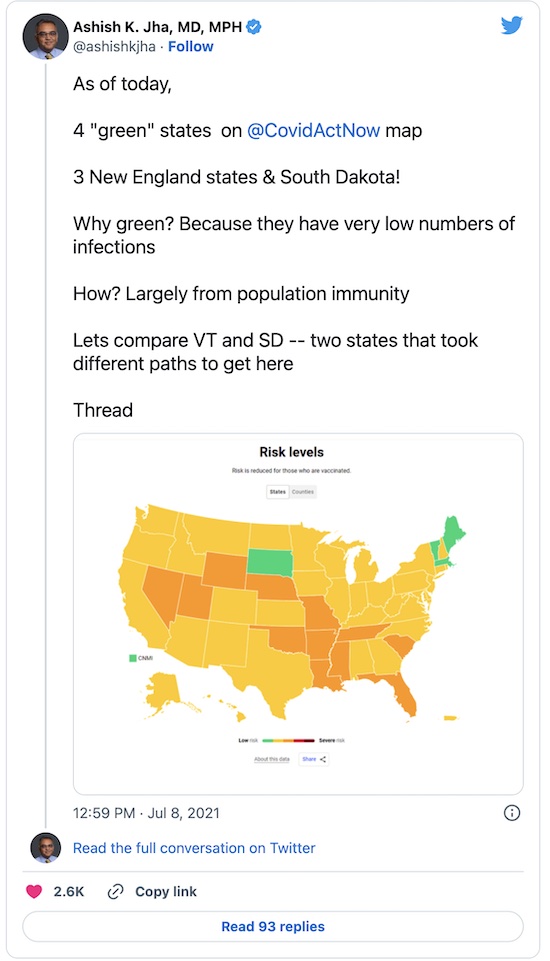 Now here at Chez Weekend, we’re safely ensconced in highly vaccinated New England. But what about South Dakota? What did they do? 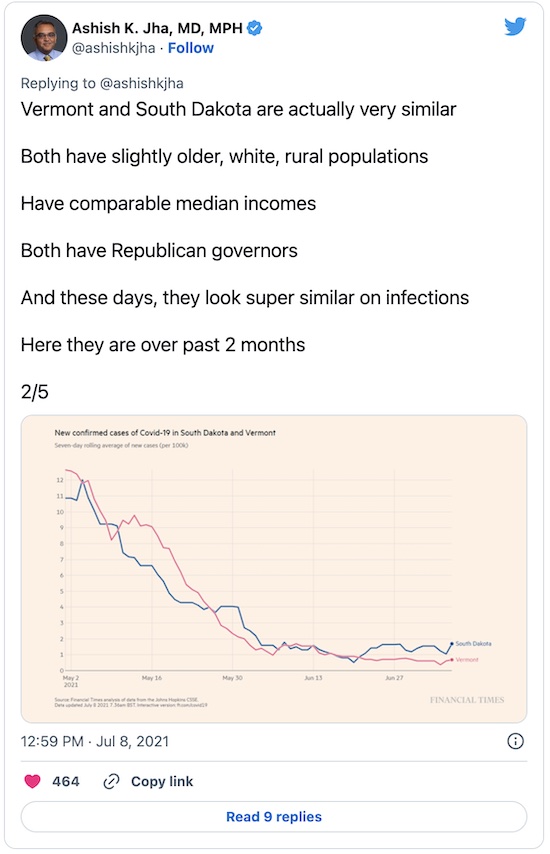 Ok, so South Dakota looks pretty similar to Vermont and Massachusetts. What’s different? How they got there: 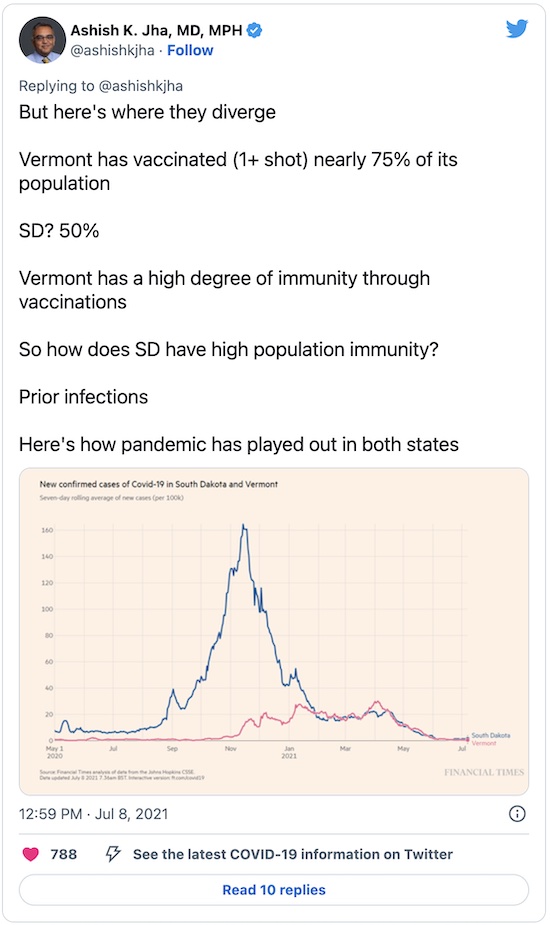 South Dakota just gave up, and let people get sick and die. The survivors are more immune. And you can see it in the death rates of South Dakota vs Vermont, showing the essential cruelty of conservative policies. New England did it better.

Immunity is not just a science problem; it’s a social and political problem. So long as we have political parasites preying on the ill-informed to persuade them to avoid vaccines, people will die. It’s almost difficult to understand why that’s not a crime.

So far, the 5 major vaccines that are widely available work pretty well against the known variants, including the scary Delta variant (B.1.617.2). Eric Topol, the head of Scripps Research Translational Institute, summarized it for us in a nice little table: 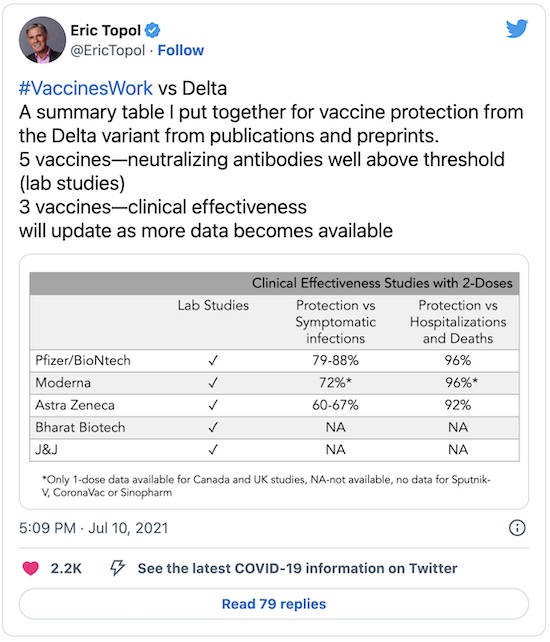 Basically all of them seem to work using in vitro studies in the lab. For the J&J and Indian vaccines we don’t yet have clinical data on Delta. But for Pfizer/BioNTech, Moderna, and AstraZeneca we do have data: > 90% efficacy against hospitalization & death, and still quite decent efficacy against symptomatic (but not hospitalizable) infection. Recall that last spring we were hoping for a vaccine with > 50% efficacy, so these results look really good. In spite of our stupidity that makes us vaccinate so painfully slowly, arguing bitterly at every life-saving step. 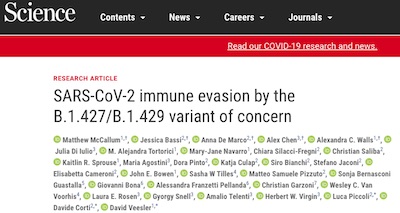 That’s good, but… the virus isn’t sitting still. It’s still being evolved by the environment of willing victims to become more infective, and to worm its way around vaccines. The scariest version of that has been the emergence of the Epsilon variant (B.1.427 and B.1.429; no idea why they collapsed 2 arms of the phylogenetic tree into a single variant). Coming out of California this time, is evidence that it has some ability to escape vaccines [3].

Figure 2 in that paper does indeed show lower neutralization of the Epsilon variant by antibodies from Pfizer or Moderna vaccines as well as from blood serum from convalescent patients. It doesn’t look super-dramatic to me, and there’s no clinical evidence yet that this is enough to be a problem. But clearly the virus is rattling the doorknobs, looking for a way in.

Maybe we should consider ourselves fortunate that maybe the Delta variant might be more virulent and outcompete the Epsilon variant, suppressing the vaccine evasion mutations? There’s some very early evidence of that (too early to cite, really); but that’s awfully thin “luck”!

Look, you know what’s right: just get vaccinated. Every person who delays vaccination puts not only themselves and their loved ones at risk, but also becomes an incubator for deadlier and deadlier varints. Get vaccinated and be on the side of humanity; don’t be a collaborator with the virus!

The slower we go, the more chance of a vaccine escape mutation. And then we start all over again, with deaths and misery and lockdowns and re-vaccinations.

Please don’t make us all go there, ok?