Apropos of nothing in particular, what exactly is 'sedition'?

I was wondering what exactly it takes to commit ‘sedition’. Turns out, it’s kind of complicated. What with insurrection, threats to murder Representatives, Senators, and the Vice President last week, apparently everything is complicated.

People are throwing around terms like ‘sedition’ and ‘treason’ to describe the actions of the Republican mobs. We can dispose of ‘treason’ fairly quickly, since it requires cooperation with another country; unless we uncover Russian or Chinese backing, that’s unlikely to stick. (Though you can’t overestimate how low Trump will go.)

Sedition: what is it good for?

But what’s sedition? There have been some interesting discussions published by people with actual rights to an opinion, i.e., lawyers and law professors. Seditious conspiracy is defined by 18 USC § 2384 (slightly reformatted here to call out the conditions as individual numbered items):

If two or more persons in any State or Territory, or in any place subject to the jurisdiction of the United States,

they shall each be fined under this title or imprisoned not more than twenty years, or both.

Item 1 is marginal, though possible, if overthrowing an election counts as overthrowing the government. Item 2 is probably out, although attacking the capital (in this case the Capitol) of a nation is an act of war. But items 3-5 seem right on the nose: the insurrectionists were exactly opposing the authority of Congress to carry out its constitutionally mandated functions, trying to delay/hinder Congress in carrying out constitutionally mandated function of counting electoral votes, and property was indeed seized. (Like the Bozo carrying the Speaker’s lectern, waving at the camera! Though more seriously, seizing control of the Capitol building.)

So it looks clear to me. But what do actual law professors have to say? The Detroit Free Press published an article [1] in which they consulted Michigan US Attorney Matthew Schneider, as well as law professors Devin Schindler and Michael McDaniel (associate dean and a retired brigadier general). They point out 3 interesting things:

Keep in mind that’s not some random Weekend Editor with weird hair saying that. That’s a US Attorney and 2 law professors. If we dug a bit we could no doubt find a very broad consensus of distinguished law professors, but this will do for a start.

Aaaand… what is it not good for? 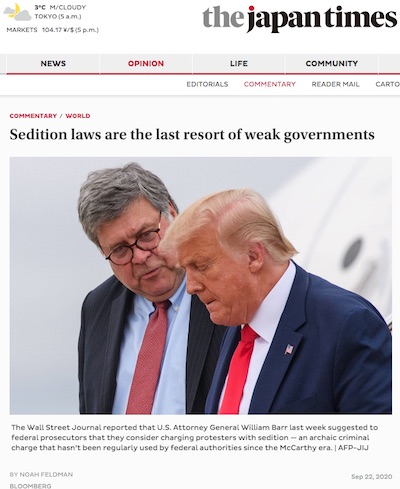 Noah Feldman is an interesting guy. He first came to my attention some years ago when a friend sang his praises to me, talking about how this guy he was at Harvard with as an undergrad was doing great things. What great things? It turns out he was helping to draft the precursor to the Iraqi constitution as part of the Coalition Provisional Authority. Keep in mind Feldman is an Orthodox Jew, but commanded the respect of the Iraqis enough that they wanted his help writing their consitution. Now you have some grasp of his persuasive powers! Oh, and he’s a Rhodes Scholar (earned a DPhil in Islamic Thought from Oxford), speaks at least 7 languages, and is a Harvard Law professor. Just a few little things like that.

So… when Feldman speaks on the subject of law, I will sit down, shut up, and listen respectfully. (On probably many other subjects, as well.)

He wrote an artice published in The Japan Times [2], of all places, about the rather fraught history of sedition charges in the US. I will grant that at the time (just last September), he was warning about then US Attorney General William Barr’s suggestion that Black Lives Matter protesters could be charged with sedition. And that the mayor of Seattle, for creating a zone with lower policing in her city, could be charged with sedition. And that he could overrule federal prosecutors, whom he described as “like children in a Montessori school”.

So you can see Feldman’s concern about the political use of sedition charges: he describes sedition as “the last resort of weak governments”. And I have to admit, it does have a quite sordid history in the US of being used for political persecution. Hence, probably, Barr’s interest in thus using it. 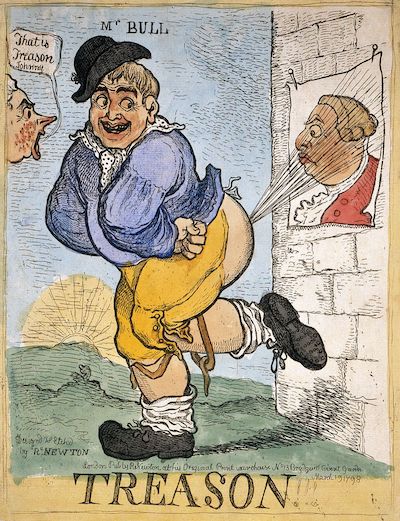 Indeed, sedition’s political misuse reminds me of past times when comparably sordid use was made of lèse-majesté, in which any perceived insult to the monarch was a crime. Today we generally regard that as a canard.

Though, during George W Bush’s Iraq war, I did hear conservatives say that any criticism of W was “sedition”. Possibly they didn’t know the term “lèse-majesté”. They definitely were not aware of Teddy Roosevelt’s opinion:

“To announce that there must be no criticism of the president, or that we are to stand by the president, right or wrong, is not only unpatriotic and servile, but is morally treasonable to the American public.” — President Theodore Roosevelt

So does sedition apply here?

I dunno. It certainly looks like it to me. There are probably technical charges for insurrection, as well. Some of them definitely apply to Trump himself.

For the moment, though, there are easier charges to press: breaking & entering, assaulting an officer of the law, malicious destruction of property, rioting, … and probably a lot of others.

There need to be prosecutions, including Trump, to ensure this does not permanently weaken American democracy.