[Warning: US-centric, lefty political rant. If you’re from outside the US and want to laugh at us… well, fair enough: we’ve earned it.] I mean… really, Republicans? Do you seriously want to put up with politicians like this? For what possible reason? Why would you even want to be in the same party as people like this? 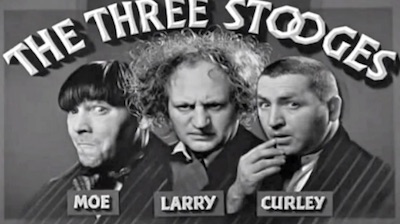 Back in my childhood, there used to be a comedy series by some gentlemen using the stage names of “The Three Stooges”. They operated from surprisingly early days: vaudeville in the 1920s, all the way up through the 1970s. Their shtick was to play utterly stupid characters, drenched with physical farce and slapstick. It was actually a bit violent and sufficiently stupid that it was discouraged by my parents.

In their defense, I will point out that the Stooges seemed to be decent people in real life, just actors who pretended to be stupid and somewhat violent for a living. And they were pretty good at it!

I mention this not because anybody cares about the bizarre American entertainments of my childhood. (Look, even I don’t care about it. No need for you to look overly closely.) I mention it instead, because in recent weeks I’ve seen three egregiously stupid statements from prominent Republicans. I mean, Republicans have been looking ridiculous to me starting with Reagan, but this is kind of over the top. 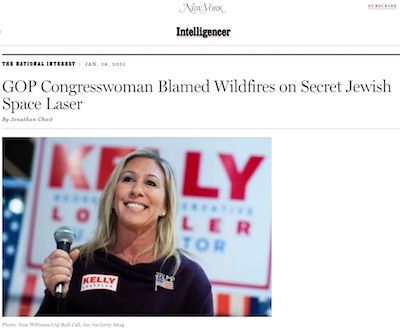 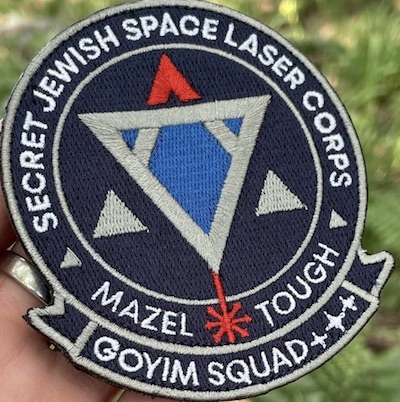 One of her more recently uncovered sins against rationality is: the California wildfires were, in her peculiar opinion, deliberatey started by PG&E in conjuction with the Rothschild family using secret Jewish space lasers to clear a path for high-speed rail.

Amusingly, DissentPins will sell you a shoulder patch for the Secret Jewish Space Laser Corps, because since it’s no longer secret you might as well flaunt it. I thought it was a nice touch that they have a Goyim Squad so guys like me (goys like me?) can help out on on Shabbat.

I mean, come on: are forest fires really so hard to believe that you’d prefer that anti-Semitic, scientifically illiterate pile of crap? (Apparently she hasn’t gotten the right-wing memo that antisemitic conspiracy theories are supposed to be updated, replacing the Rothschilds with George Soros. Sigh: it’s not even up to date crap!)

Really, Republicans: why do you vote for people like that? Why even be in the same party as others who vote like that? 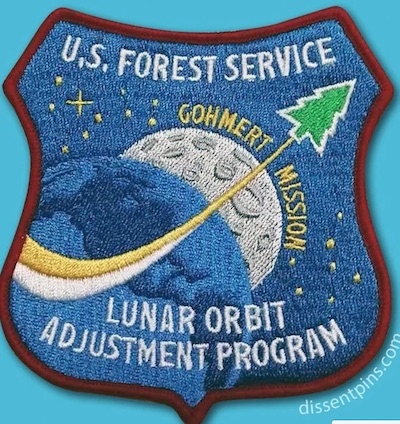 Our second Stooge is the venerable Representative Louis Gohmert, upon whom we can always depend to say something bizarre. In this Reuters video, he asks the US Forest Service to change the orbit of the moon to stabilize climate change!

That is physics illiteracy beyond belief. Fortunately, should you need a shoulder patch to tell the world you’re on board with the Forest Service’s space program, DissentPins has you covered here, too.

An article in the Washington Post suggests it’s not stupid for the obvious reasons, but really an attempt at stupidity in another way. [2] That is, he knows we can’t move the moon, but he thinks we can’t stave off climate change either unless we do something as drastic as moving the moon. That’s sort of… 2nd-order stupidity?

Just to make it perfect, when he was quoted he wasn’t mad about being portrayed as asking dimwit questions. No, he was concerned that people would confuse his use of BLM for the Bureau of Land Management and think he was talking to Black Lives Matter: 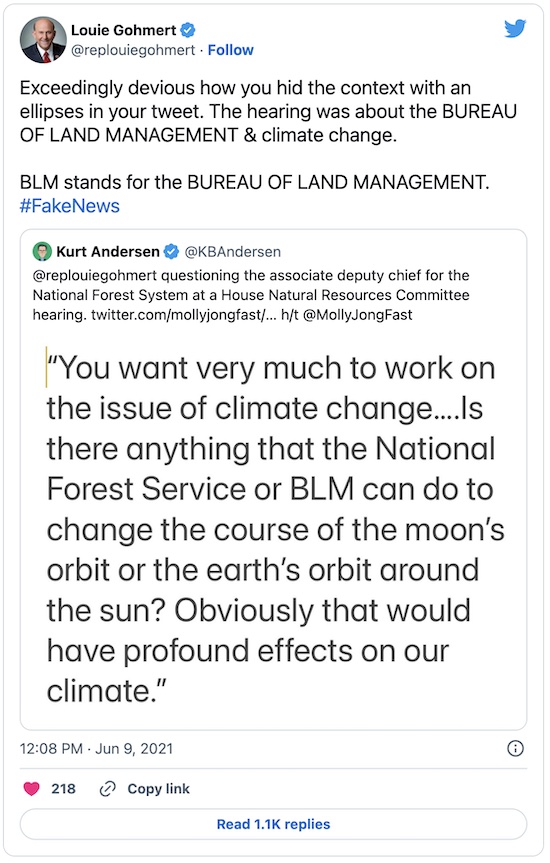 Yeah, that’s the main worry when people quote you about trying to use the Forest Service to move the moon: being confused with anti-racists. (Me, I want people to think I’m anti-racist, because I want to be anti-raciest.)

Again, for the second Stooge: Really, Republicans: why do you vote for people like that? Why even be in the same party as others who vote like that? 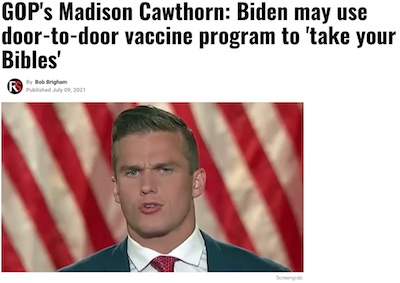 The third Stooge (and I’m stopping at 3 only out of disgust, not because there aren’t more) is: Representative Madison Cawthorn. You might think we should cut him some slack, since he’s a Congressional newbie just elected last year in 2020. And hey, he’s only 25 years old, right? But… there are limits to what we can overlook.

As you may have noticed — and as we have been harping incessantly here at Chez Weekend — the vaccination rate in the US is falling off, and we’re not anywhere near herd immunity country-wide, let alone total vaccination. Some of that is hardcore resistance from knuckleheads. But a good deal is from communities that need some outreach: maybe they don’t speak English, maybe they can’t get a day off from work, maybe they can’t travel to a vaccination center, maybe they need to hear from their local faith community leaders, maybe they want to hear from their doctors, maybe… well, lots of things. So we’re doing those things: getting local community leaders to reach out to their neighbors in low-vaccination areas.

Ah, but not to this Boy Genius! Cawthorn was at CPAC (Conservative Political Action Committee — not a hopeful starting point) and said in an interview that this was a plot to confiscate your guns and your Bibles [3]: 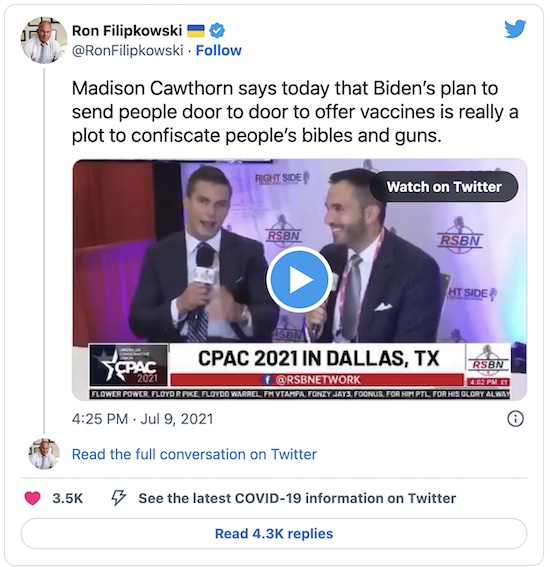 Yeah. Anything but saving people’s lives with vaccinations!

(So far no guns ‘n’ Bible grabbin’ shoulder patch from DissentPatches. But it’s early days yet, on this one. Give it a few more days.)

For the third (and last, for now) time: Really, Republicans: why do you vote for people like that? Why even be in the same party as others who vote like that?

Honest, I haven’t done any cherry picking here, or at least none of which I’m aware. Those are just the stories that happen to have presented themselves to me. And if I’m being honest, pretty much all Congressional Republicans either look to me like the 3 Stooges above, or like Ted Cruz (who is smart, but just looks straight-up evil). The defense of Trump lunacy and double failure to impeach him is a stain upon all of them. 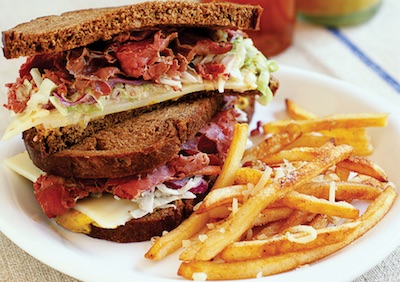 Look, I grew up Republican. My family was Republican since there was a Republican Party. But I got better. If you’re a Republican, you can too. I promise it won’t hurt. Democrats actually try to make sense, and that will come as an enormous relief if you just try it out.

Besides, the view from the laser space station is stupendous. Pretty good pastrami at the canteen, too. You might like it?

2: P Bump, “Rep. Gohmert’s question about the Forest Service changing Earth’s orbit was dumb, but not for the reason you think”, Washington Post, 2021-Jun-09.↩