COVID-19: The Power of Positive Thinking

People are always telling me to “think positive”. I hate it.

I really hate being told that. It’s as though I’m being socially coerced to buy into some collective delusion that lets NT’s ignore how terribly we’re all being exploited by the rich and their corporations. Or how brutal we are to each other.

We depressed, anxious folk are more realistic in our assessments of the world, don’t you know?

Still… it’s time to test to see if I’ve cleared the rebound infection. Maybe, if I “think positive[ly]”, as all the NT’s endlessly chant, I can be released from confinement on the 2nd floor?

Behold the fruits of positive thinking: I am indeed, still positive. COVID-19 positive.

But… today is the 5th day of rebound COVID-19 (no 2nd course of paxlovid, irritatingly enough). Symptoms are fading: no fever, most of the aches & pains faded, no long sessions of productive coughing. Still some productive coughing/runny nose, sudden sweats, and fatigue. And a RAT producing that glaarrgh red T line.

I’m re-reading some of my old SF paperbacks that happen to be covering most of the the walls of the tatami room upstairs here. Dean Ing’s Anasazi was pleasantly chilling, and now I’m trying to figure out Paul McCauley’s Eternal Light. Some of the old books from the 1970s and 1980s haven’t worn well, culturally speaking, and require one to re-enter the cultural frame of memory to understand them. Others are more… universal. No idea how to predict ab initio which would have become which. 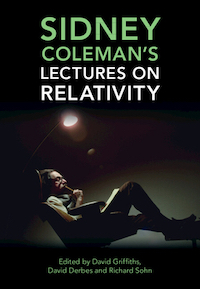 In a more serious vein, I’ve been working my way through Sidney Coleman’s Lectures on Relativity. It’s about as good as you’d expect, if you knew Coleman: almost startlingly clear, with his lecture style that makes the world suddenly make sense. It’s like an ambush of clarity: you can’t see it coming, but every time it clobbers you from behind, it’s pure joy of insight.

I miss him. I modeled a lot of my own teaching technique after him (and a couple others, but maybe 50% El Sid). That picture of him on the cover, slouched in a recliner, is perfect. I was really sad one day to learn that he didn’t much like teaching, even though he was an excellent and hilarious experience in the classroom. I wanted the fiction that because he made me happy, surely he must be happy doing so. I guess it was a duty for him.

But I respect dutifulness, and still miss him anyway.

As far as YouTubers… Let me begin with how amused I am at the word “YouTuber”. It sounds like some arcane epithet to be hurled when one wishes to compare one’s antagonist to a potato. (Go ahead, think it through. The rest of us will wait. Hint: “You… tuber!”)

I’ve been feeling confined, helpless, and dependent with this idiot virus from the unmasked idiots who gave it to me on the idiotically crowded, slow MBTA shuttle bus. So I’ve been fascinated with independence. Hence the videos of people building off-grid cabins and rather more elaborate off-grid workshops and homes:

No more deranged than usual, really.

(Or possibly I’m too deranged to tell. Feel free to debug my state of derangement in the comments, if you like.)

Oh, I forgot to add to the YouTube stuff: Project Kamp!

Some amiable Europeans, mostly Dutch, bought abandoned land in Portugal and are rehabilitating it. A changing cast of characters come for a few months each, to experiment with solar arrays, vegan cooking, weather stations, soil moisture sensors, and so on all hooked up to a Raspberry Pi. In the meantime, they live completely off-grid, make good friends with their neighbors, and just generally try to figure out ecologically sustainable living.

Also socially sustainable, since they like their neighbors. So much so that they get invited to come harvest oranges that the neighbors don’t have time to harvest. The video of fresh, sun-warmed oranges is quite moving.