Many years ago, while happily working at Symbolics, I was exposed to the mathematical madness of Bill Gosper. He was fond of using continued fraction expansions for all sorts of odd things. At the time (in the 1980s) he held the world’s record for largest number of digits of π ever computed: first extracted as a continued fraction using some Ramanujan-like formula, then – in his words – “encrypted” into decimal digits.

So I was pleased to see one day that in some ways the most compact way to represent a rational approximation to a real number was as a continued fraction. It takes fewer bits than as a decimal (or binary floating point), or even as a rational.

So when π day [1] came around last year, we had just shut down our research labs for the pandemic and I had begun working from home. I had a long (17 year) tradition of putting mathematical humor on my door to amuse passers-by. (This is what I had put there a week or so earlier; it sat there for 4 months of sad, empty hallways until I retired amid the pandemic summer.) 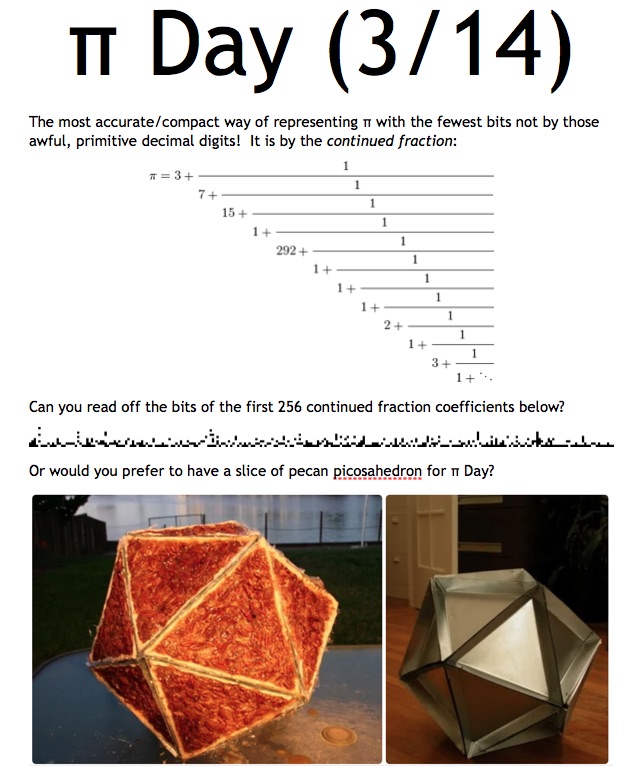 Anybody wanna bake a picosahedron? I’m available as sous-chef.

1: Just entertain the notion that τ might be better, because Vi Hart says so. ↩