So, it’s Passover. What might late-stage capitalism have to say about that?

Yes, it’s Passover. (Also Good Friday, and part of Ramadan, and probably a host of other religious observances. It’s a big weekend for monotheism! I just want to talk today about Passover in particular.)

Here in the land of late-stage capitalism and corporate oligarchies, no opportunity to extract profit may go unexploited. Of course, Christmas is the most glaring example, but other holidays get The Treatment as well.

Sometimes the intent is benign: if you’re a grocer and you know your customers will want to enjoy a traditional holiday meal, you might think of ways to sell it to them.

So far, so good. But sometimes it can go hilariously wrong, or even cause deep offense, if you don’t take the time and care to understand people’s traditions.

Toay’s example is from Whole Foods: they’re owned by Amazon these days, but otherwise they run a fine grocery store. Very high quality produce, products selected with some care for health, nutrition, and environment, and so on. A little on the spendy side, but we shop there a lot.

But… somebody really screwed up this advertisement: 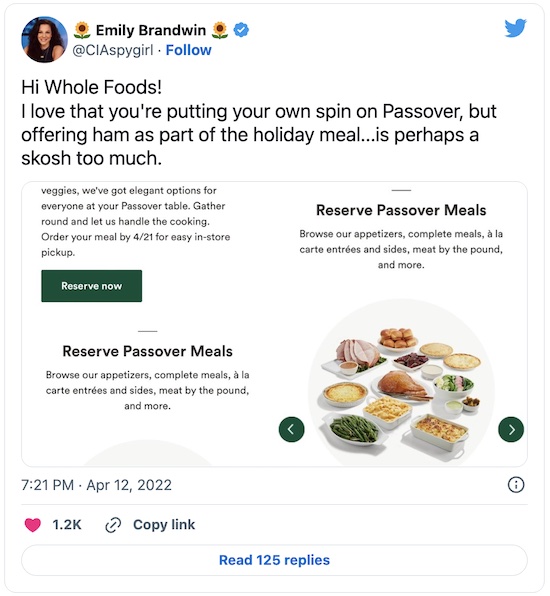 Ok, I’m a little leery of her cognomen “CIAspygirl”, but she has the right of it. There are more things in this picture that Jews can’t eat for Passover than they can:

Now, as one who is personally religious:

Take it from the experts at Six13: they know how to make religion fun. It’s the perfect counterpoint, as a friend pointed out.

1: Nah. You want me to footnote the Passover story in Genesis, or something?