The 2022 Nobel Prize in Physiology or Medicine went to Svante Pääbo.

(Yes, I am avoiding thinking about the US midterm election results until they’re more final.) 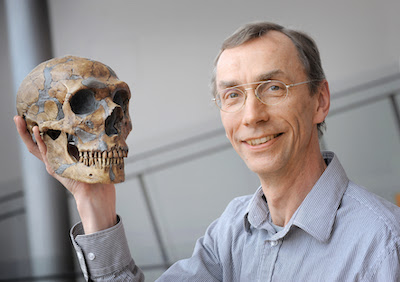 Today I learned, in the newsletter from the International Society for Computational Biology and then from the Nobel Assembly itself, that Svante Pääbo was awarded the Nobel Prize in Physiology or Medicine. [1] He’s shown here with an old friend. (Yes, it was more than a month ago. I don’t follow the awards closely.)

For what? You mean, beyond the name? I mean, the guy’s got not just one, not just two, but two consecutive umlauts in his name!

But his other accomplishments, beyond orthography, are impressive too: he led the team that sequence the Neanderthal genome! Additionally, he discovered a previously unknown hominin clade, the Denisovans. Either would have been a career capstone; both are just stupendous.

The results are amazing all by themselves. Even more interestingly is the amount of gene transfer: we have both Neanderthal and Denisovan genes in modern humans.

I’ve heard Pääbo speak. He’s famous for having no bullet points on his slides, and almost no words. He just shows pictures and equations, and talks about them. It’s a really, really effective technique.