Everybody’s worried about how long the protection from a COVID vaccine will last, whether there can be reinfections, and so on. How much do we actually know about that as of now?

Unsurprisingly, very little. Really the only way to know is to vaccinate a bunch of people and watch them for a couple of years. The animal data looked pretty good before the clinical trials, but it always looks good or the human trials wouldn’t have been allowed to start.

Over at In the Pipeline, Derek Lowe wrote about this [reference 1] (among other things like side-effects, efficacy across different populations, logistics of the rollout, and other really interesting stuff).

That leads to the paper by Dan, et al. [reference 2] which hit the preprint server (“not yet peer reviewed”) in the last couple days. Lowe notes that this seems to be the largest and most detailed study of post-viral-infection immunity in the entire medical literature! It basically says that at 6 months post-infection:

The other, more frustrating news that I get from that paper is the intense variability across patients and across time, as shown in their Figure 1, excerpted here. There are going to be a lot of different kinds of response seen in the population, possibly including re-infection. People will probably get really confused & angry about it. (Though, to be fair, “confused & angry” does seems to be the zeitgeist.)

Overall, this is looking like good, solid vaccine response with persistence of the things we think matter for a long time. Lowe reminds us of the following hopeful historical fact:

For what it’s worth, there are patients who survived the 1918 influenza pandemic who had B cells that still responded [reference 3] with fresh neutralizing antibodies after over 90 years, so they can be rather hardy. 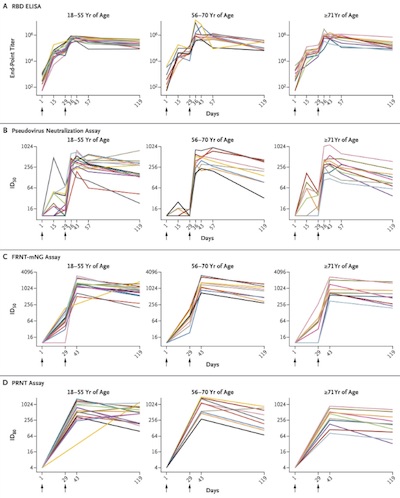 On 2020-Dec-03 the New England Journal of Medicine published a letter from the mRNA-1273 Study Group (basically the cohort of academic & Moderna scientists studying the Moderna vacccine). [reference 4]

The figure at right reproduces their results, saying that reactions to the virus remain quite stable are 119 days (about 4 months) from the first injection. Ok, that’s not a long time, but it’s the time that has elapsed so we can look empirically.

Emphatically: this is not a prediction, it is a measurement of what actually happened. Here we’re looking at 34 trial participants from the Phase I trial, who have been on the study the longest: 15 subjects age 18-55, 9 subjects age 56-70, and 10 subjects age 71 and older. Notably, the curves shown here do not stratify by age, indicating that vaccine response is probably as strong in the elderly as in everybody else. The 3 columns show the 3 age cohorts, youngest to oldest. The arrows on the horizontal axes show the first and second injection dates.

The authors point out that all these responses were above the median of 41 control subjects, who were convalescing from having actually had COVID-19. So the vaccine response is stronger than having had the disease, which is good to see.

While the antibodies do seem to be slowly declining, they’re declining at about the rate of convalescent patients. As the authors point out, it is not yet known if memory B-cell response has been achieved, i.e., if the immune system will have a long-term memory of SARS-COV-2. It did, however, provoke primary CD4 type 1 T helper cell responses 43 days after the first vaccination (which is hopeful), and B-cell studies are ongoing.

So it looks like the dose used in the Phase 3 trials, the same as the one studied here, is the right one, or at least a good one.