On the Efficacy of COVID-19 Non-Pharmaceutical Interventions

Non-pharmaceutical interventions (NPIs) have been controversial: people continue to object loudly and strongly to things like masking, social distancing, and closures of schools and workplaces. We now have some retrospective data: how have each of those measures performed, in terms of live saved for the complaints they’ve caused?

From Delthia Ricks comes a heads-up to a study on NPI’s vs COVID-19 world-wide: 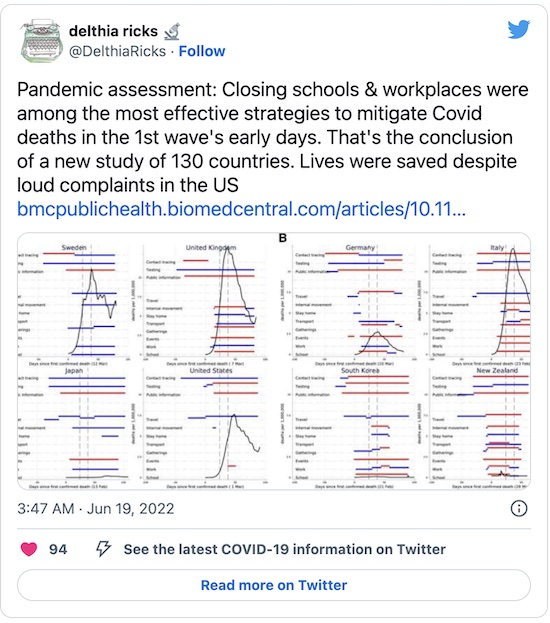 She’s referring to a worldwide study of NPI effectiveness during the pandemic by researchers mostly based at the University of Manchester (England), published a couple weeks ago in BMC Public Health. [1]

The authors are careful to point out (in the first sentence of the abstract, no less!) that while NPIs are empirically known to work, they:

They studied the first wave of COVID-19 “to limit reverse causality”, i.e., people looking back at what worked in the first wave to decide what to do in the subsequent waves. So we’re looking at 0 - 24 days and 14 - 38 days after the first COVID-19 death in each country. This properly accounts for the lag in deaths from onset of infection, which is the only thing policies can affect. (It does not appear they corrected for the fact that countries with later waves could look at those with earlier waves to see what worked and what did not?)

While they display the usual reluctance to show any math common to biology/medical/public health folk, there are a few clues we can glean (mostly from the Supplement). It looks like they mostly did a set of linear regressions of per capita deaths over time separately by country, on the various policy variables and confounders.

As is always the case when authors exile math to the Supplement, it was written with an uncritical hand and they kind of made a hash of it. I sort of grasp what they did, but not enough to check. Very frustrating! 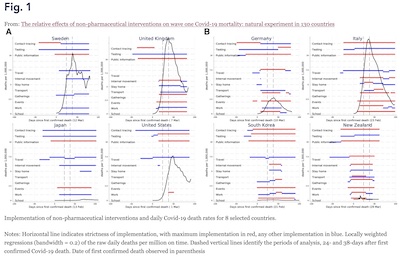 We see clearly the awful shape of the first wave’s death rates. But we also see that this is a pretty gnarly multivariate statistical problem. We’d best use more careful models than simply eyeballing the data! As the authors say:

Notably, elucidating mortality impacts from separate interventions using visual aids, or statistically without controlling for those co-introduced, is problematic given the introduction of multiple interventions. 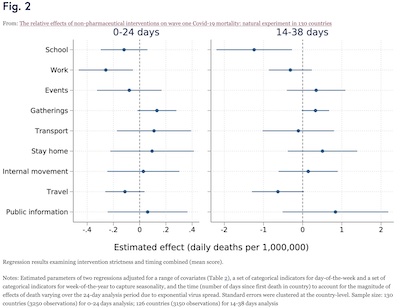 Figure 2, reproduced here, shows the result of that more nuanced analysis. It’s a pooled cross-sectional regression (regress in each country, and combine the results) of the effects of all 9 interventions, both based on strictness and timing. Stricter and earlier interventions worked better, saving more lives.

The results seem to be:

(NB: Mask usage, my favorite NPI, was not tested and cannot be analyzed from these data.)

However, it may be unexpected that workplace and, particularly, school closures were associated with relatively lower Covid-19 mortality across countries whilst interventions such as stay-at-home measures were not. One plausible interpretation is that schools and workplaces involve ‘compulsory’ interactions with others, as individuals feel obliged to attend in person and may be concerned for loss of earning or educational opportunities. This compares to interventions targeting other sources of human interaction which are more ‘voluntary’ and may reduce irrespective of whether mandated policies are introduced (therefore giving no additional observable effect of introducing the intervention).

The school closure efficacy is interesting. Kids may not be personally affected so much by COVID-19, but they can be asymptomatic carriers who infect their elders, and thus bump up the death rate. Low personal risk is not low public risk!

The findings are clear:

Of course, the most effective preventive measure is vaccination, so that’s the first avenue to pursue.

The most effective NPIs are the measures about which people, particularly conservatives, whine incessantly. But they save lives! Do you value your ideology more than you value the lives of your neighbors?! The evidence says that American Republicans do indeed cling to their ideology with a sociopathic degree of self-regard. But their policies are factually incorrect, and their embrace of those policies is morally incorrect.