My Brief But Spectacular Career as a Lawnmower Battery Surgeon

My lawnmower needed a new battery, but they’re no longer made. So I made one of my own.

An excellent lawnmower… and its discontents 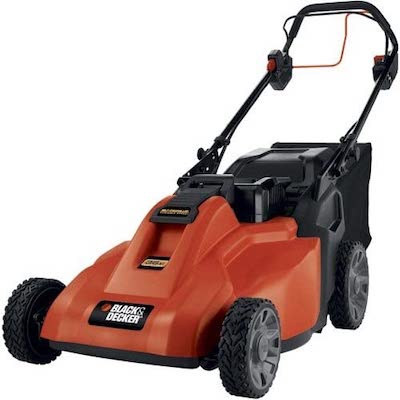 Eleven years ago, we got a battery-powered lawn mower: a Black & Decker SPCM1936, self-propelled with a 36 volt battery, shown here. It’s a fine machine, with plenty of power. It even has a mulching feature, which sends clippings through the blades multiple times before dropping them, so there’s no need to bag clippings. I’m very satisfied, since except for what you’re about to read, the only maintenance has been to get the blade sharpened a couple times.

But it’s no longer manufactured, technology having marched onward to better batteries and such. I can live with that. But more importantly, the battery is no longer manufactured either! Now, batteries are a consumable: they last a few years, then start losing their ability to hold a charge, eventually becoming useless. (Ok, maybe with the exception of the Ambri Liquid Metal Battery, which is… exceptional. More about that, on another occasion.)

So after about 5 years, we needed a new battery and had a terrible time finding one. Finally, we found one in a warehouse somewhere inconvenient. That’s not ideal: it had been sitting on a shelf somewhere, chemically deteriorating, and would have a shorter than expected life. Still, it was the only one we could find, so we got it. It lasted 4 years instead of 5, so that was sort of ok.

But late last year, that second battery gave out and would only last about 15 minutes between charges. We either had to replace it, or buy a new mower. Much searching and consultation with lawn and garden store folk revealed replacement to be hopeless. I almost pulled the trigger on buying a new lawn mower: I wanted to get one that used the same battery as the snowblower, but the company that made the snowblower apparently no longer makes a battery-compatible lawn mower. Sheesh.

It was then that I realized I can’t possibly be the only person with this problem, and searched for what other people did. That led to a plethora of YouTube videos, a couple of representatives of which are shown here.

The bottom line is: you can open the battery casing, remove the 3 expired 12 volt cells, and replace them.

I figured with a PhD in physics I should maybe, just barely, be able to figure out how to wire 3 cells in series without shocking myself by touching battery terminals in some inappropriate way. (Then again, I was a theoretical physicist, so my lab skills may reasonably be questioned. I’m not as bad as Pauli – the second Pauli exclusion principle is: “a functioning device and Wolfgang Pauli may not occupy the same room” – but then again I wasn’t as good a theoretical physicist as he was, either.)

My career as a lawnmower battery surgeon 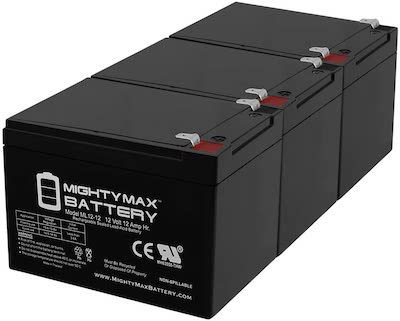 First, we had to set about acquiring the transplant organs for our surgery. A quick trip to Amazon, our preferred source for transplant organs, turned up the 12 volt cells shown here. We acquired 3 of them, 12 volts each, alleged to be of dimensions compatible with the battery casing and to tolerate deep discharges.

The total cost was about $80, well below the cost of a replacement lawn mower. They even came nearly fully charged, which was convenient – though it meant I wanted to handle them with some care!

Next, as all the best surgeons do, we laid out our our surgical tools in a little mise-en-place. Shown here are the pliers, the T20 torx driver borrowed from my wonderful neighbor, and some WD-40 to open stubborn screws that have been in place for possibly a decade or more. The 6 torx screws removed are also shown in this after-the-fact picture. 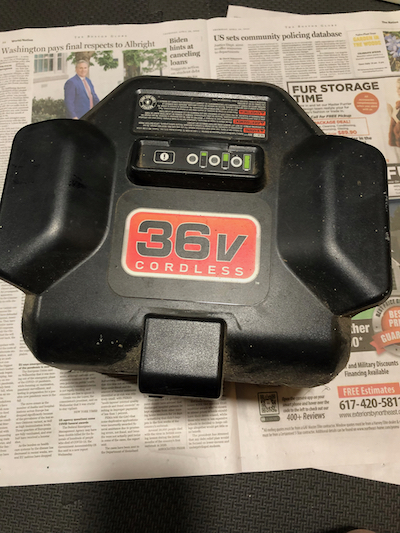 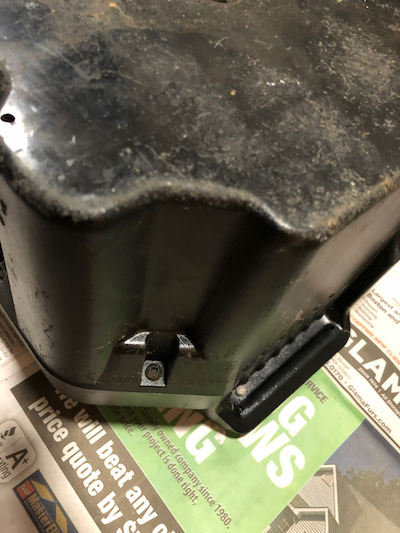 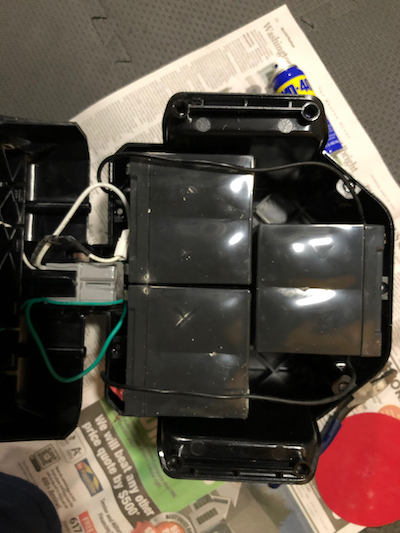 Subsequently, we prepped the patient for surgery, as shown here. Turning it over, we found the 6 torx screws and, with the aid of our friend Mr. WD-40, removed them. As you can see from the swollen cells, it’s entirely understandable that this battery was kaput. 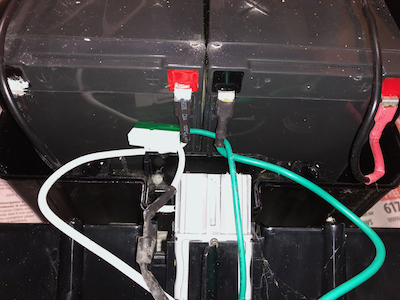 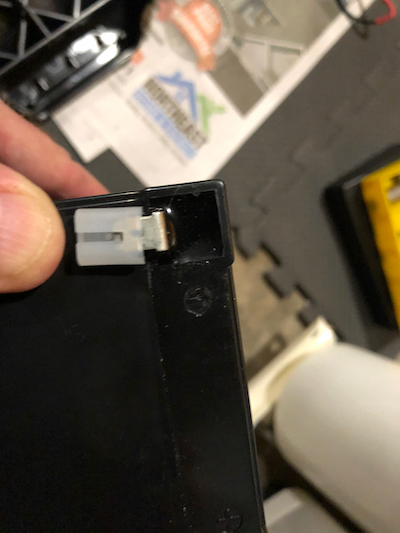 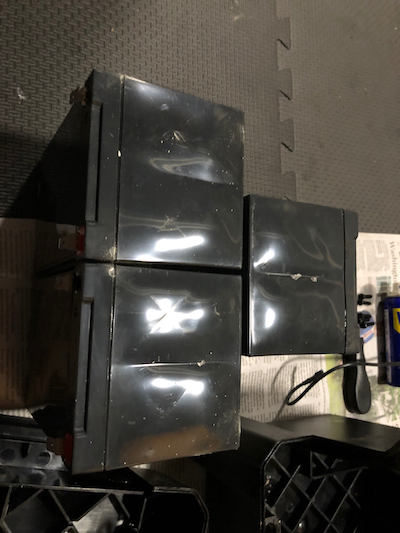 Subsequently${}^2$, we carefully photographed the wiring in situ, to make sure we put it back together in the same way. That includes a tricky little wiring clip about which the videos warned. We then removed the defective cells and set them aside (a problem for the hazardous waste collection day in our town). 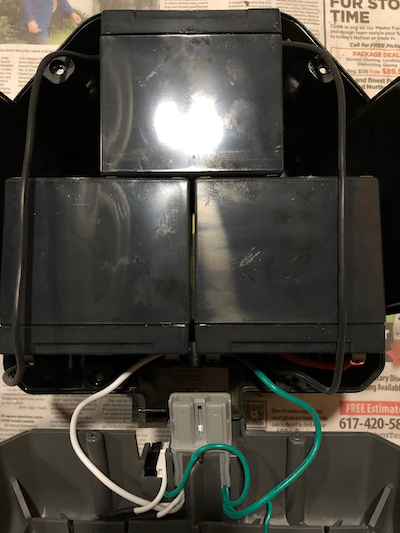 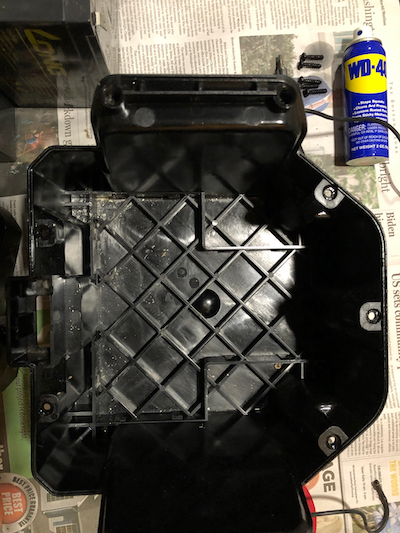 We were left with the empty battery case shown here. The new cells fit perfectly, and we rewired them together with some trepidation and triple-checking against the photograph of the original wiring.

Initially, the test lights on the top of the battery did not work, so that was somewhat of a worry. However, after installing it in the mower and leaving it on the charger for a bit, that began working as well and showed a full charge.

The acid test was to mow the lawn, which test the now-rejuvenated battery passed with flying colors. 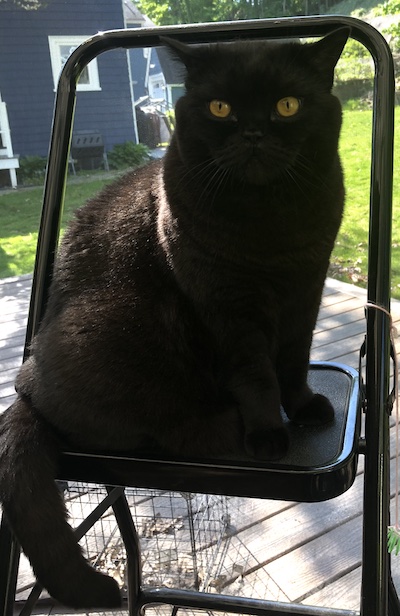 The lawn mower now works like new, with plenty of oomph. The surgery was a success! And apparently Nature has forgiven me for being a theoretical physicist, as the Pauli effect did not put in an appearance.

Ok, so it wasn’t rocket surgery. But it was battery surgery; I had to start somewhere.

As you can see from the photo: the Weekend Publisher, in his supervisory capacity over lawn maintenance and all other human activities, also approves. Or, at least he purred at the yard while perched on the deck, which is something. I admit I’m not sure what exactly, but something. (Hey, don’t mock me. A cat’s approval is hard to win!)

Now to figure out how to dispose of the old cells… properly & legally.

If you have a Batteries Plus store nearby, they should recycle them for free.

First, welcome to the Weekend Commentariat in your capacity as “BatteryHooligan”!

Yes, something like that is what we’ll do: either figure out a local company which will (probably?) recycle the kaput cells, or give them to our town’s hazardous waste disposal folks.