A full calendar year of blogging has passed. So, thankfully, has the annus horribilis 2021CE. How did we come out? (The blog, that is. 2021 itself is still too traumatizing to discuss.)

When the geeks count time by the kalends

According to the TimeAndDate.com duration calculator, 549 days have elapsed total, 365 of which were in calendar 2021 proper. So we’ve been writng this crummy little blog that nobody reads for almost exactly a year and a half:

The year-end is a time for retrospection and introspection. And since it’s the sesqui-blogiversary, let’s see how things have gone. For that purpose, I’ve written a little R script to analyze post/comment/hit statistics and test for trends over time, the relationship between comments and hit counts, etc. [1] (Excluding this post itself, of course, for obvious reasons!)

The results of this script are available in the Notes & References below for:

Frequencies of posts, comments, and hits

So first let’s use the script’s output (saved in spreadsheets in the Notes & References) to get an idea of how many posts and comments there were in 2020 and 2021, and some idea of the average rate. The script has this built in already, so from the transcript we can extract this nifty little table:

Conclusion: This is still a blog you can keep up with by reading once a week. Also, for some mysterious reason I get more comments via email than the comment system.

Hits and comments in relation to time

That’s been mostly about writing posts. What about reading?

To investigate readership, we’ll next look at the post hits vs time (regrettably including my own looking at the posts searching for errors and things to rephrase), and comments vs time. 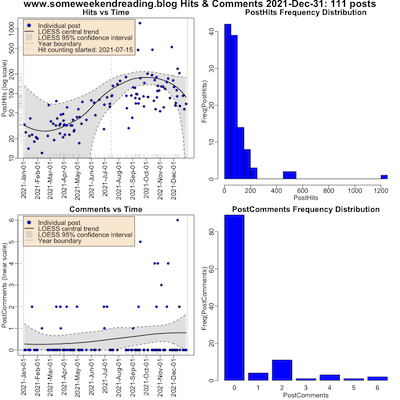 Here’s the hits vs time and comments vs time for 2021 (click to embiggen). The 4 plots are: 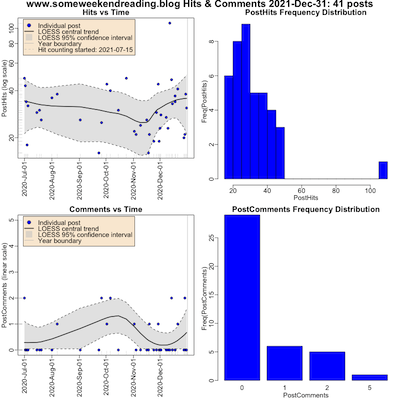 For comparison, here’s the same analysis restricted to 2020 only (just the 2nd half of the year; click to embiggen).

For 2020, we see that hits just bumbled along steadily, generally under 40 hits/post. Comments were also quite rare. 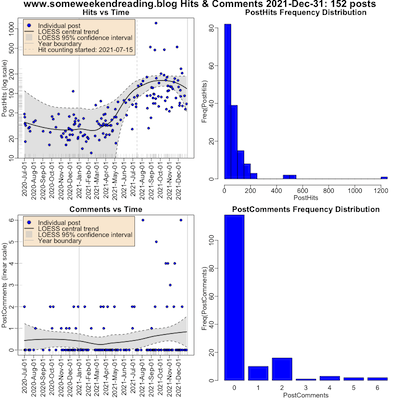 And finally there’s the omnibus dataset, looking at all data from the blog’s Big Bang through today (click to embiggen).

Conclusion: Still a crummy little blog that nobody reads, unless I write about an FDA hearing for medications against life-threatening pandemic diseases, and advertise that fact in the comments section of a high-traffic blog.

Are there more comments on high-hit posts?

As long as we’re thinking about comments, we might want to entertain the hypothesis that there are more comments on posts with more hits. After all, hits are people looking; the more people who look the greater the cumulative chance that somebody will comment, right? 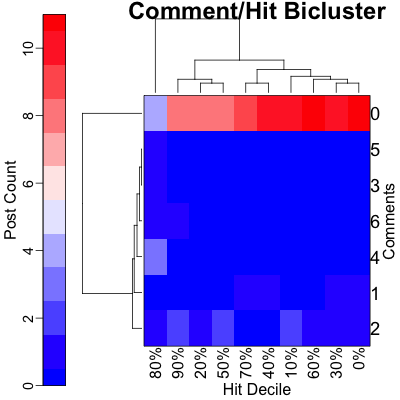 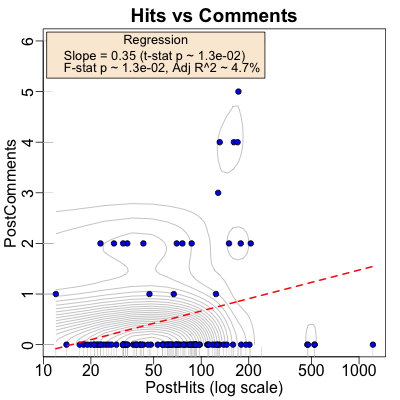 To investigate such a relationship in 2021, we’ll first do an exploratory bicluster of comment counts vs hit counts (top figure), and then a linear-log regression of comments on log hits.

It seems clear that a naïve linear model is useless here. While the nonzero comment points may have a mild trend, the 0 point comments drag the regresion into sillyspace. Perhaps something like tobit regression would be more appropriate? A topic for next year. 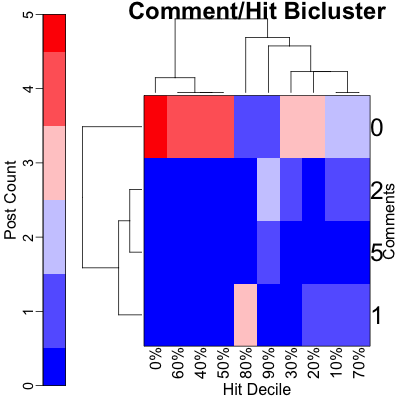 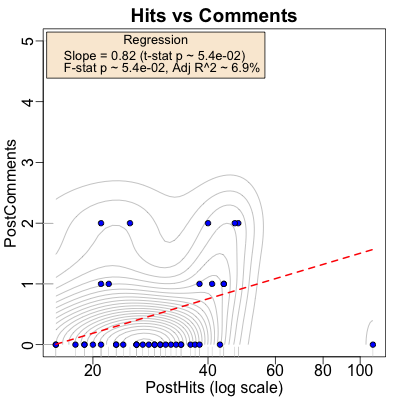 If you look back at 2020 only, you get similar results, except with even fewer hits. Keep in mind, though, that hit counting only started in mid-2021. So all these hits represent people looking at the back catalog of posts. They might even be mostly me, referring to back posts to remember what they said, proofreading for errors, etc. 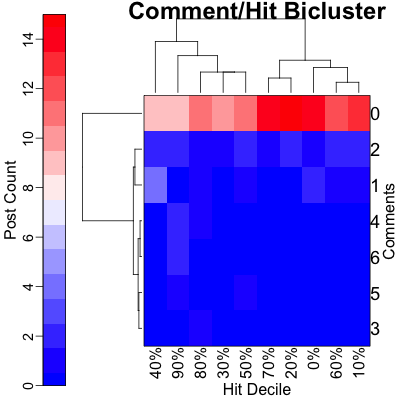 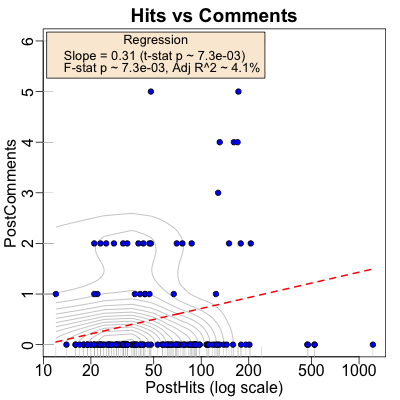 Finally, we can also look at the overall model from Fiat blog in mid-2020, through the end of 2021. It appears the conclusions are unchanged from those of 2021 alone:

Let’s back up and think about that for a second, in more pedestrian correlation terms. If we do a Pearson correlation test between PostComments and PostHits, we get $p \sim 28.5\%$ and a correlation of $R \sim 0.08$, obviously not significant:

But wait: we took the log of hits, to cope with outliers. The corresponding thing in a correlation test would be rank ordering, i.e., a Spearman correlation test. That gets us $p \sim 7.7\%$ and $\rho \sim 0.14$, which is almost significant:

So there might be a relationship here, but it’s between nonzero comment posts and their hits, obscured by the morass of 0-comment posts. So… consider the 0-comment posts as left-censored, and try tobit regression? Maybe next time!

Conclusion: Most posts get 0 comments. While there is statistical significance to a putative comment/hit relationship, the strength of prediction is essentially nothing. A more signficant model involving cutoffs, like tobit regression, will be fun to explore at in year-end post for 2022.

The boring nature of spam and the (blessedly infrequent) nastygrams

There’s still lots of spam, mostly in Russian. I haven’t broken it down by year (perhaps I will do so next year?), but overall nearly every comment submitted is spam.

Last year I did a spiffy little analysis by hand-removing my own comments, that I submitted to respond to others. I won’t do that here, because I haven’t automated it yet. So without breaking down by year and removing my own comments, we have 444 pull requests (see image of the Pull Request tab from the blog’s GitHub repository). There have also been 79 accepted comments (including my own, bogusly), as seen in the table up at the top.

Assuming comments arrive with a certain binomial probability $p$, our Bayesian posterior Beta distribution on $p$ assuming a uniform uninformative prior is:

Conclusion: The spammers are persistent but hopeless, since I let absolutely none of it through. It’s impressive their bots can get past my bot filter in the comment form, but unimpressive that they never, ever learn.

Google search console and its discontents 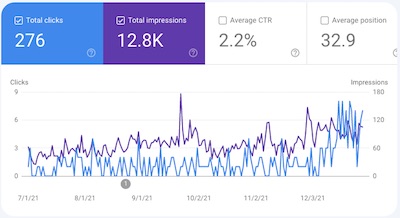 We have a pretty low click-through rate of 2.2%, which means as far as Google searchers are concerned, this really is a crummy little blog that nobody reads. And I’m still ok with that.

As with last year, most of the clicks were from the Anglosphere, the top countries being: US, UK, Canada, Australia, Germany, India, Phillipines, Spain, Sweden, Austria… My former French colleagues are conspicuous by their absence! (Maybe they’re reading, just not searching for this blog via Google. Yeah, that’s the ticket.)

By device, there were about 2.5x as many clicks on a desktop computer as mobile. Tablets were just a minor contribution. Google says this crummy little blog that nobody reads is mobile-friendly, but it looks much better on a real screen instead of a dinky little phone screen.

The Google search queries that got click-throughs to this crummy little blog that nobody reads are just plain weird:

After that, it’s just minor stuff with 1 click each for various inanities. 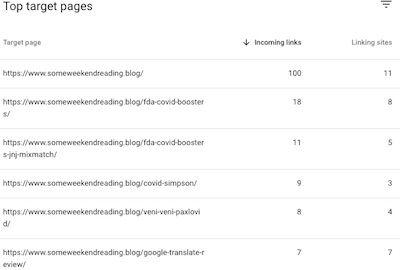 The outside link report says we are linked to by 224 unique outside links. Most of them link to the front page, along with some others about FDA hearings on COVID-19 vaccines and therapeutics. I guess that makes sense. 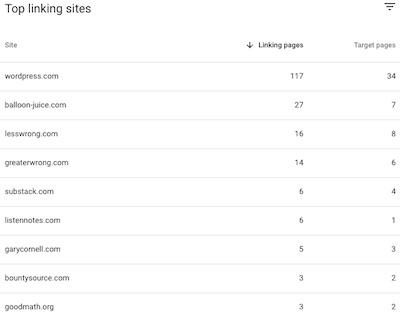 The sites from which those links come make sense, mostly. Wordpress.com is the host for most of the web nowadays, and a couple blogs on which I comment use that (notably TheZvi). Balloon-juice.com, LessWrong.com, goodmath.org, GaryCornell.com, and so on are other blogs where I’ve left comments. (GreaterWrong.com appears to be an alternative format mirror of LessWrong.com.) There are, of course, also a few weird linking sites that appear to be pointless link farms.

I don’t do any promotion for this blog: no Twittage, no Instagrammaton, no FaceBorg, no TankTuck, no YouTubby, no nothing. I don’t even have social media accounts like that. The only things I do are (a) mention it to people in conversation or email when it’s relevant, and (b) very occasionally leave comments on somebody else’s blog. The linking sites confirm this, being mostly places I’ve left comments on other blogs and the few inevitable internet weirdos. (Am I an internet weirdo? Quite possibly…) 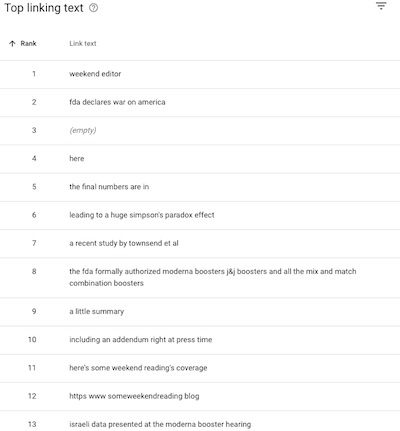 Finally, the text they put in their links to this blog is… puzzling. I’m just looking here to see if people refer to me as “that idiot”, or something equally amusing.

Modulo a few more hits on popular posts, pretty much the same as the last time we took stock:

This is still a crummy little blog that nobody reads.

And I’m still ok with that.

There are a few links, mostly from the comment sections of a few blogs we’re I’ve dropped in to say something. I’m not interested in doing promotion work, or monetization. I might look into Google Ads and some minor promotion someday, once I get the stylesheet stuff straightened out, but also maybe not. So don’t hold your breath on that.

To my spammers: You’re hopeless. You’ll never make it past moderation. Move along.

To my readers (all 3 of you, excluding my spouse, my cat, and myself): Thanks for reading. I’m gratified at the couple of you that have expressed interest. Please feel free to leave comments; it makes me happy to engage with thoughtful people.

Here’s hoping for 2022: maybe it’ll be better than 2021 on all sorts of measures, including the number of genuine comments on this blog?

Yes, though I admit blog comments are a rather more trivial goal.

Stopping the pandemic, stopping the threats to democracy worldwide, figuring out US health insurance… and a hundred other things. It’s a daunting list!

I found you via Zvi, and added Weekend to my RSS feed (feedly). Not sure how we/I are/am reflected in your metrics.

At any rate, Out with the old. I look forward to what this New Year brings, to this blog and to real life. A resolution: at least one comment of substance here, in the next 365.

And thanks: my blog analysis script (reference 1 above) no longer gets divide by 0 nonsense when computing DaysPerComment for 2022… :-)