Somebody asked about a recently published abstract comparing ivermectin vs remdesivir in treating COVID-19. (Sigh.)

Despite repeated debunkings, ivermectin is a mania repeatedly rebunked, and just won’t go away. I should know better than to play scientific whack-a-mole. But just a quick look can’t hurt, right? (Right?) 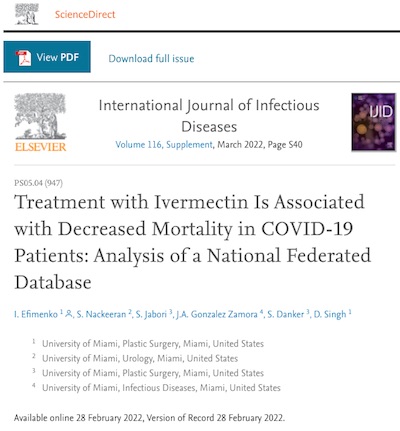 The paper in question [1] is in fact an abstract a conference on emerging diseases last year. That means, among other things, that it is very, very short: just a single page. So we can read the whole thing in just a few minutes.

The general idea is they took a look through a large EMR (“electronic medical records”) system, and:

I mean… it looks like a reasonable thing to try. And fighting your way through the general chaos of US healthcare records cannot have been fun or easy! So we have to start from a position of offering kudos to the authors for doing something that was probably difficult, for the usual bizarre US healthcare reasons.

Also, we should note that this is just an abstract from a conference; from the id reported it might even be an abstract of a poster. That means 2 things:

I want to make that clear, because although I’m going to be critical, the authors did some rather uphill work in a system that probably made data access difficult and forced them into making a brief, sketchy report. It’s not a full paper, and we shouldn’t hold it to the standards for that.

But let’s not be rubes, either.

Still, they dutifully report a result that should make people at least take a look:

Now, what should we think about that? I have numerous reservations:

Finally, just because I want to bend over backward to give these folks credit for doing something difficult, they close by admitting a large randomized controlled trial is required to really decide the question.

That’s fair enough, but people only run large RCT’s when there’s at least some preliminary evidence of an effect that’s both large enough to be clinically meaningful, and statistically significant enough that it’s probably real. So far, neither of those is the case with ivermectin.

So, no: this does not make me change my mind. I’m not on the ivermectin bandwagon for anything other than treating parasite infestations.

(And somehow, I’ve written a “summary” that’s longer than the publication itself! Shame on me…)

3: Yes, I’m a fussy old statistician. But I came by that fussiness honestly. ↩