Somebody asked me about the evidence associating putative ivermectin effects with worms, not COVID-19. Seems like it’s been finally published!

Remember last fall when we looked at claims ivermectin worked against COVID-19, but the effect was pretty hinky when we looked at credible reviews? One of the main findings from Scott Alexander’s review [1] was from Avi Bitterman, showing the studies that showed an effect were in parts of the world with worm infestations: 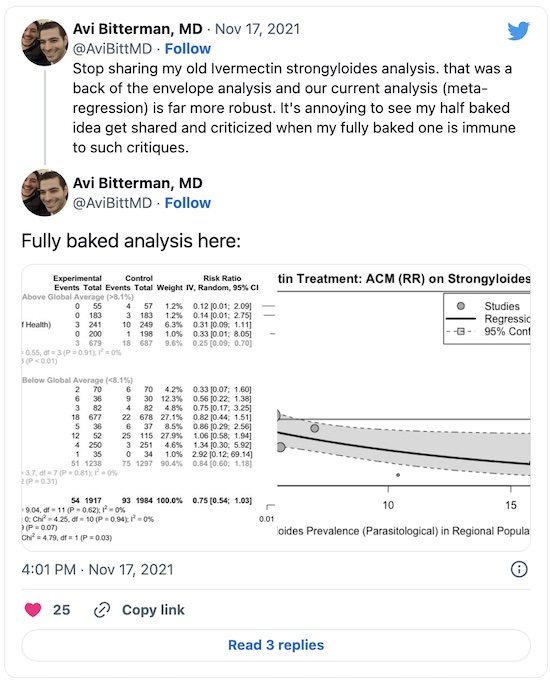 Basically, worm infestations make everything more terrible, including COVID-19; removing the worms if present makes surviving COVID-19 more likely. But if you don’t have worms, then ivermectin does nothing for you.

Well, now Bitterman’s work has made it through peer review and is now officially in the scentific literature. [2] Let’s have a quick look through it:

There’s more in the paper, but as far as I can tell the conclusion is that this finally, definitively closes the door on ivermectin as a COVID-19 therapeutic.

Ivermectin is for worms.

For COVID-19, seek first vaccination! Then, if you still get sick: seek paxlovid, molnupiravir, fluvoxamine, and monoclonal antibodies (one of the few remaining ones still effective against the Omicron variant, like bebtelovimab).