At autumn in New England, thoughts turn to...

At autumn in New England, thoughts turn to the extreme beauty of nature, the weather turning more comfortably cooler & drier, cinnamon and nutmeg smells everywhere, and… trebuchets, catapaults, air cannons, and other implements of imparting to pumpkins various levels of sub-orbital trajectories.

It’s autumn… finally. 2020, in a single year, has managed to impose several decades of wear and tear on all of us. But autumn in New England… well, even the most dark, dour and depressed heart such as that of your humble Weekend Editor cannot help but breathe in the beautiful scents and bask with relief in the beauty.

This week, your Weekend Editor & Editrix went on a little trip to look at foliage in the Berkshires. (Don’t judge us; it’s a New England thing.) We stayed at the (empty) house of some friends, cooked for ourselves, work masks outside, and maintained extreme social distance. But was, quite literally, our first time away from home in the last 7 months due to the COVID-19 pandemic. So it was special. 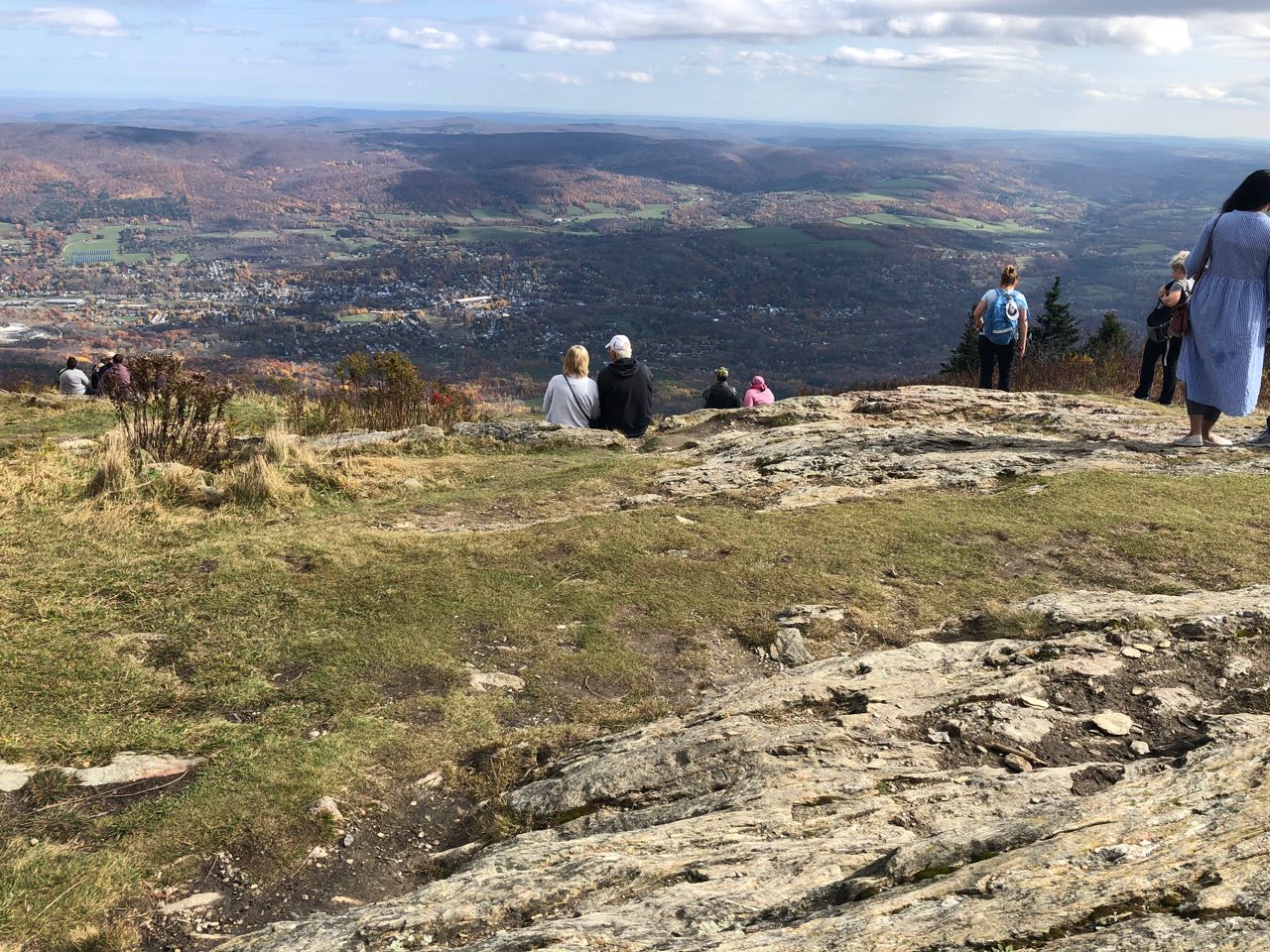 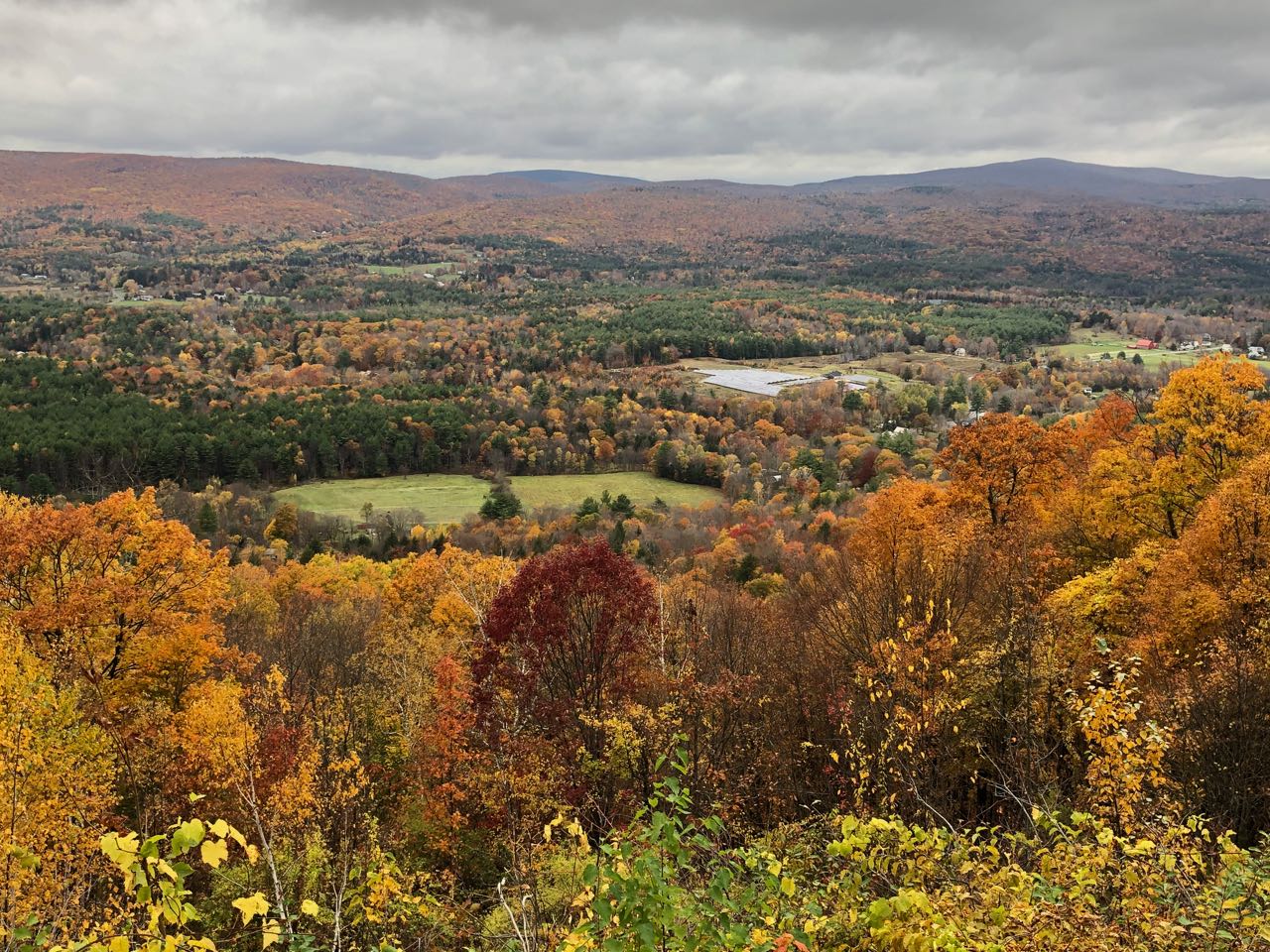 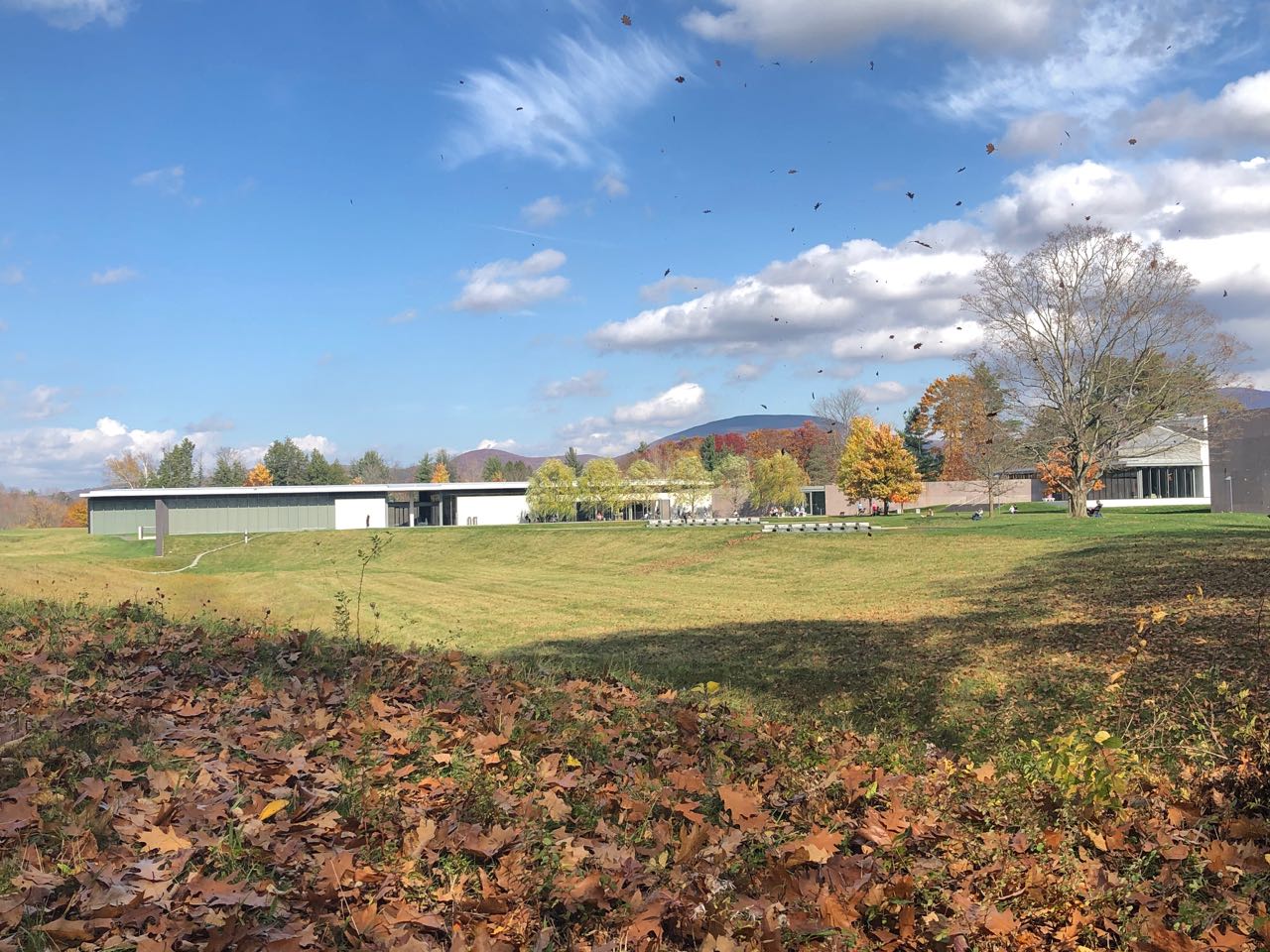 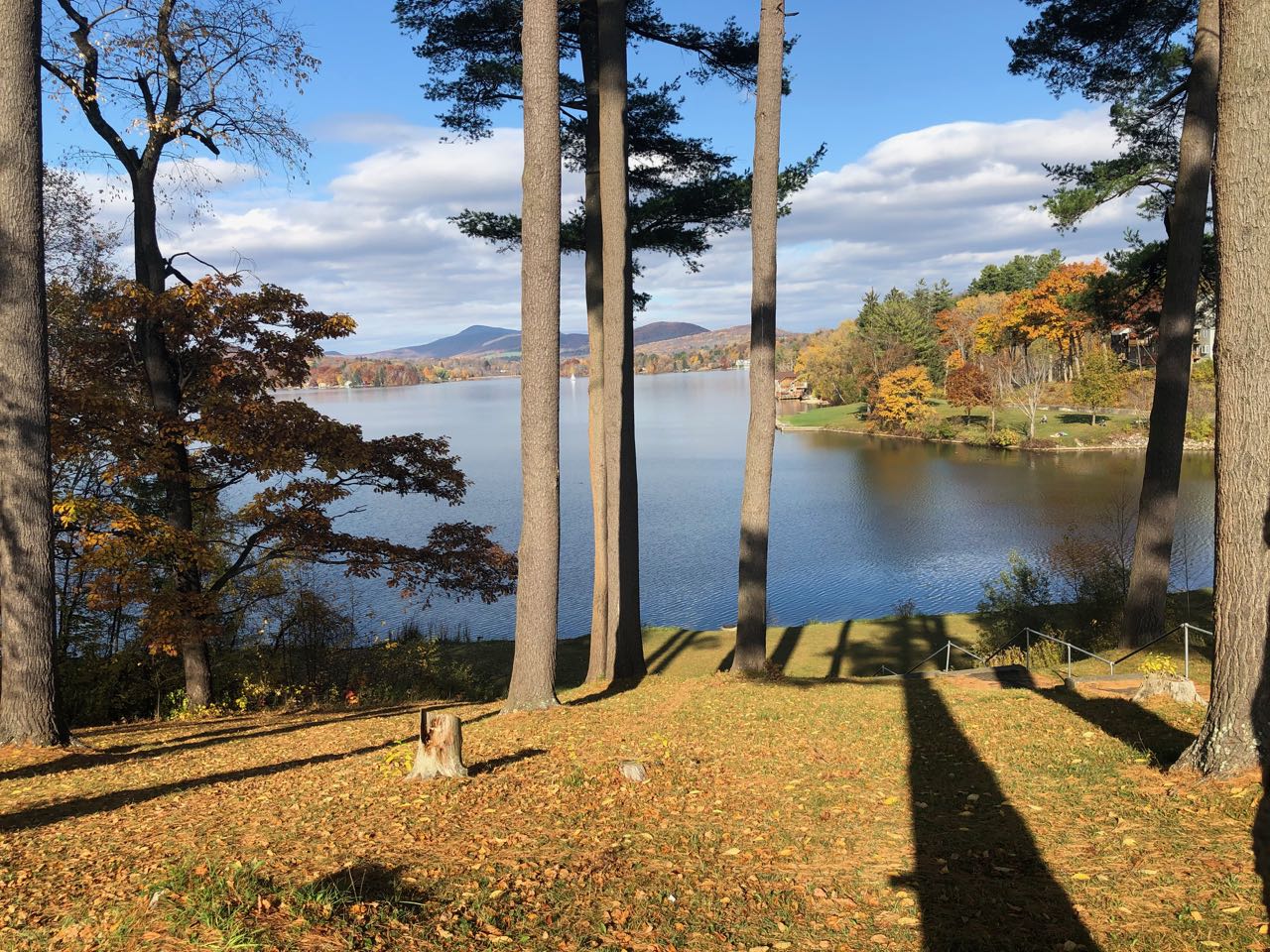 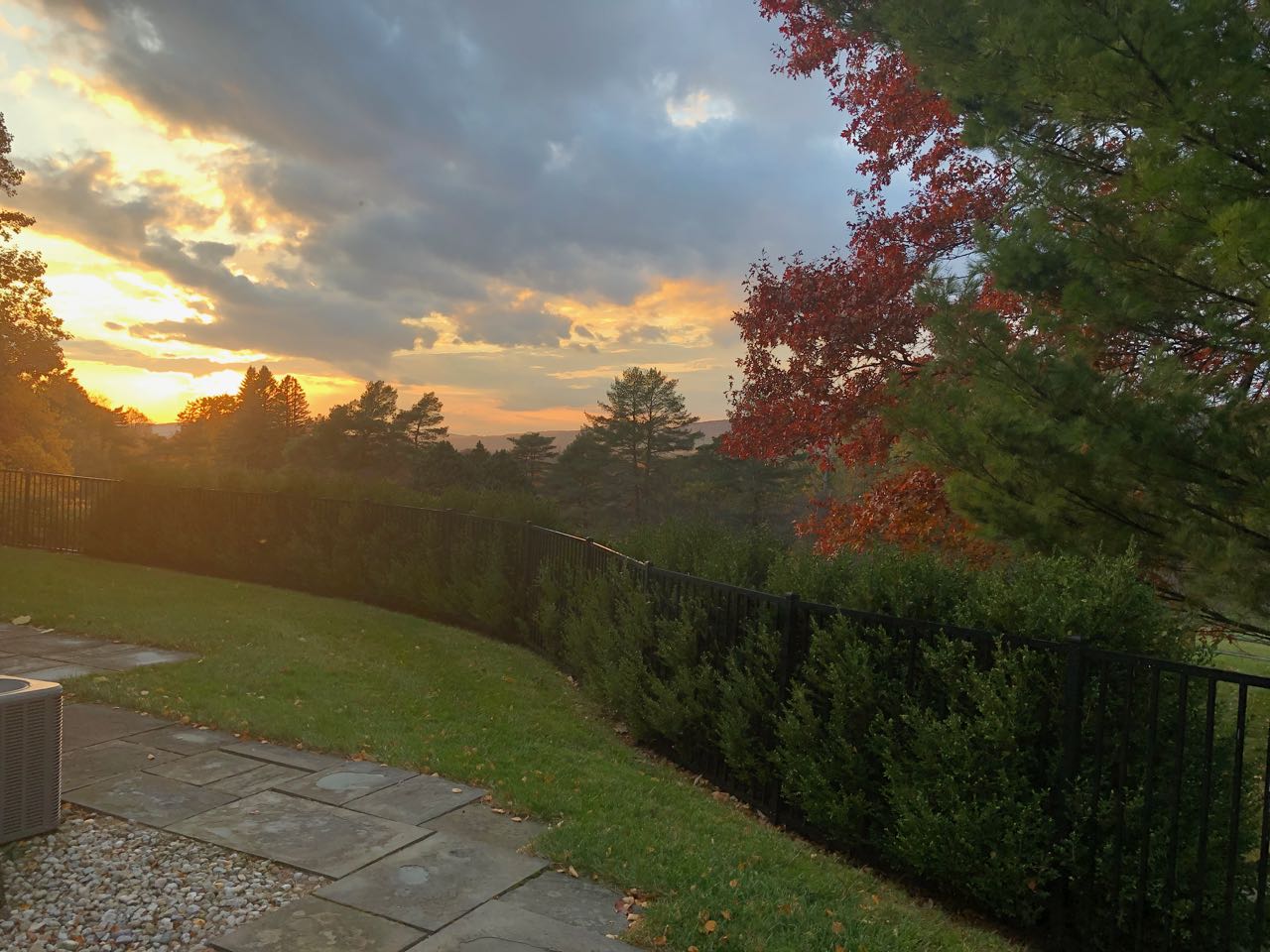 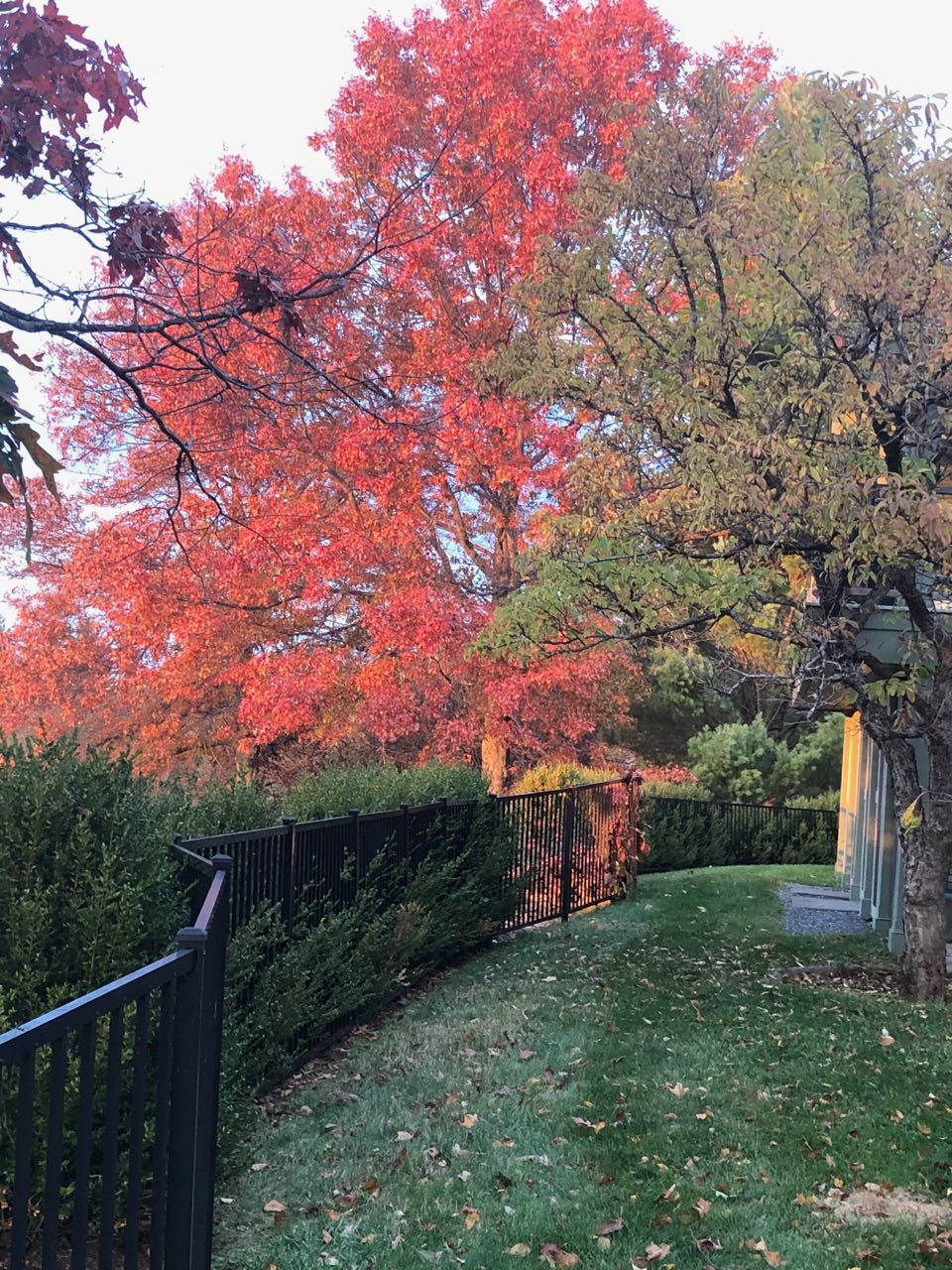 The views from the hairpin turn near the Whitcomb Summit on the Mohawk Trail in the Hoosac Range, and from the peak of Mt Greylock were spectacular! (The Bridge of Flowers is also quite spectacular in a different way, though perhaps this was not the correct time of the year.)

At lower altitudes, Pontoosuc Lake and the view of the mountains from The Clark. (The photo doesn’t quite capture how beautiful the leaves falling at The Clark were; every gust of wind brought a huge hail of leaves down. Your Weekend Editor is a crappy photographer. Hint: the mouse-over hovertext for each picture gives you the caption; each picture is a link to a larger version.)

Even something as simple as a backyard tree at the house of our friends, illuminated by a sunset, was something to make one pause.

So… yeah, that was pretty good.

The other thing about autumn: pumpkins!

The other thing about autumn is what people get up to with pumpkins. I mean, it’s just some innocent gourd, right? But they decorate with them, even to the extent of using glass labs at a major research university to craft blown-glass replicas, a favorite of the Weekend Editrix. And they carve them — good heavens, they carve them in oddball ways! They even pumpkinize the face of Dr. Horrible from Dr. Horrible’s Sing-Along Blog.

But all that… cute as it is… is as nothing compared to what happens when mathematicians, scientists, and engineers put their minds to The Problem of the Pumpkin. For example, at MIT [1] there is a tradition of dropping pumpkins from high buildings, to “investigate” the splatter patterns. I once observed pumpkins filled with liquid nitrogen, frozen solid, converting 22 stories of gravitational potential energy to kinetic, then interacting with the concrete & asphalt below in a manner generally agreed to be most satisfactory. I seem to remember they flashed as they hit, too. [2] 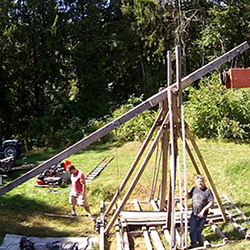 Nonetheless… cute as that is… it has recently come to my attention that there is a higher form of pumpkin madness: the annual (since 1986) World Championship Punkin Chunkin. They use trebuchets, catapaults, and (my favorite) compressed air cannons apparently with multi-stage pressure injection! (I wonder if the barrels have rifling to impart spin stabilization to the pumpkin? Or would the irregularity of the pumpkin surface cause enough unpredictable turbulence to make that kind of pointless? So many questions!) 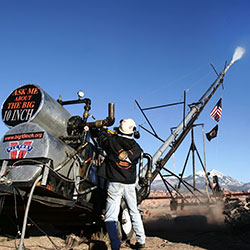 The record is a 2013 throw of a full-sized pumpkin for 4694.68ft. (I love that they hallucinate a precision of 6 significant figures.) Throwing a pumpkin for just a bit short of a mile is… well, artillery. It should come as no surprise that it’s being held at a small airport. They may need redirection of air traffic: if you’re going a mile downrange, you’re probably going up about half that — a flying pumpkin at 2300 feet altitude is surely a hazard to air navigation.

Their rule book makes for for interesting reading, too. They’ve been at this for rather a long time (since 1986), and have extensive (and laudable) safety rules.

There may be madness to their methods; but their madness is the divine madness.

It’s become a bit of a Nerd Tribe custom. If you shiver with excitement, wish you were there, and want to participate, you may be a potential member of the Tribe. If, on the other hand, you think something like “Why in the world would you…”, then you are not a member of the Tribe. So long as you are even slightly respectful of our customs, you may consider yourself granted Honored Guest status within the Nerd Tribe. ↩

2: Maybe a triboluminescent thing going on there, like the wintergreen Life-Savers trick? ↩

3: Let $v_0$ be the muzzle velocity, $R$ be the range, $\theta$ be the angle of inclination of the barrel at firing, and $g$ be the downard acceleration due to gravity. We’ll totally (and unrealistically) neglect air friction.

So the latter solution tells us how long the pumpkin is in the air. Then the range travelled is the horizontal velocity $v_0 \cos \theta$ times the time in the air, or $R = v_{0}^{2} \sin 2\theta / g$. (As a check, differentiation with respect to $\theta$ recovers the expected result that range is maximized by firing at $\theta = \pi/4$, or 45°.)

This is awesome. didn’t know about the flying pumpkins :). I am in a country where people carve turnips instead of pumkpins. Wonder how those would fly…

Oh, yes – the American pumpkin carving is an imported tradition from Irish immigrants, who carved… turnips!

Some of them shown at that Wikipedia link actually look scarier than pumpkins. Gotta respect the originators of the art form…

(Note: you’re neglecting extra muzzle velocity to overcome losses to air friction, so need to up that a fair bit.)

Yeah, the whole thing ignores air friction. That will add a need for considerable extra muzzle velocity, detailed modeling of vorticity shedding along the rough pumpkin exterior, and the trajectory will no longer be parabolic (losing velocity due to friction in flight causes it to bend downward faster).

I love the picture on the left and the one of the lower right. Nice shooting. D

↪︎ Reply to david wunsch
Comments for this post are closed.