How Can Evusheld Possibly Work?!

Evusheld is an antibody infusion which confers about 6 months of vaccine-like immunity to COVID-19. How can that possibly work, when antibodies last a few days to a few weeks?! 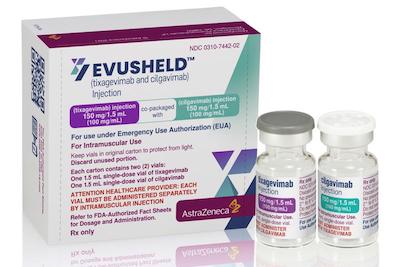 Evusheld was approved last December, as we wrote at the time. [1] Interestingly, it was approved directly by the FDA, bypassing the usual VRBPAC committee of external experts for review.

It’s 2 antibodies (tixagevimab and cigavimab) given as simultaneous injections. They target distinct areas of the SARS-CoV2 spike protein.

The interesting bit: This confers immunity at efficacy levels of 77% for 6 months, starting more or less immediately!

Now, if you’re an immunocompromised individual who cannot medically tolerate vaccination (2% - 3% of the US population), this is a big deal, even if it requires dosing twice a year forever, at a cost of $1,000/dose.

Vaccination is about $30/dose, for comparison.

But the puzzle to me was: given that infused antibodies last somewhere from days to weeks in your body since you’re not making them, how can you get immunity for 6 months? Today we’ll dive into that question, and get a (partial) answer.

The evidence it works

First, Eric Topol of Scripps tells us it seems to work pretty well: 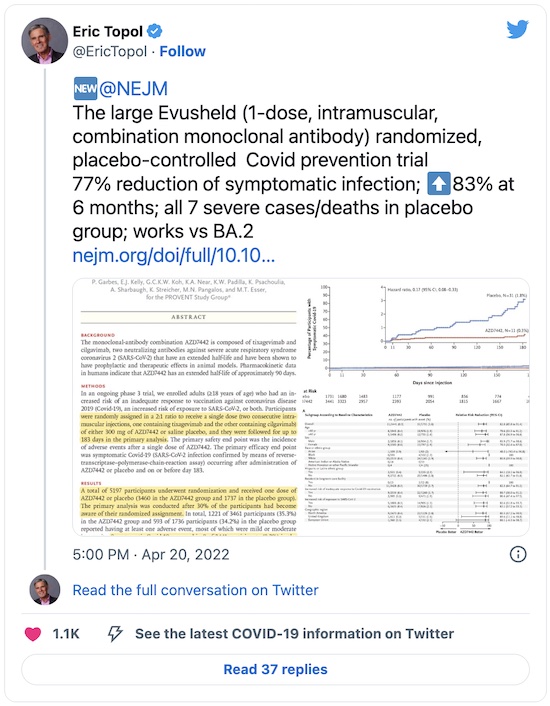 By way of evidence, Topol points us at 2 articles in the New England Journal of Medicine [2] and Science Translational Medicine [3], both top-shelf sources for this sort of thing. 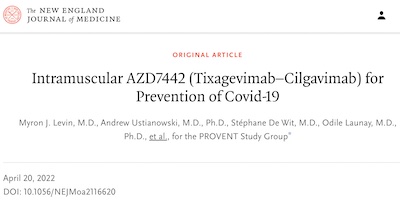 First, let’s have a look through the NEJM paper, which is the publication of the clinical trial results for Evusheld.

We’ll check their numbers for efficacy using our kludgey little binomial confidence interval R script. [4] They used a much more sophisticated Poisson regression method with robust variance, but didn’t publish enough details for us to reproduce that exactly. So we’ll just be looking for crude agreement with our crude method, nothing more.

First up, they assessed mild to moderate adverse events. Keep in mind that by saying “mild to moderate”, they’re counting even if people just report a headache, a cold, or something minor like that to their doctor. They saw such mild events in:

We shouldn’t expect that to be statistically significant, and indeed it’s not; the efficacy against mild/moderate adverse events was broadly consistent with 0%:

The treatment and control groups are pretty much identical as far as mild/moderate adverse events go. That’s good; at least evusheld doesn’t make anything worse.

Next, let’s look at symptomatic COVID-19 and death rates.

At an early readout, when 30% of the patients had discovered the arm the trial to which they’d been assigned, they report:

So I’m not worried about their efficacy as much as I’m worried how 30% of the patients somehow discovered which arm of the blinded trial in which they were enrolled! 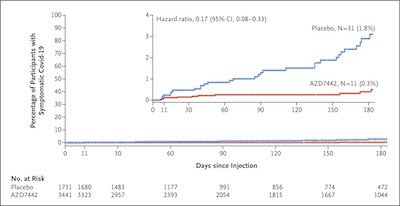 The Kaplan-Meier curve, shown here, gives impressive results in terms of the hazard ratio. The blue curve is the control group, and we see cases rising; the red curve is the treatment group where cases rise much more slowly. They reported results on extended follow-up at 6 months of 82.8% (95% CL 65.8% - 91.4%). Taking numbers from the KM plot, we broadly agree, again to a couple significant figures with our crude methods: 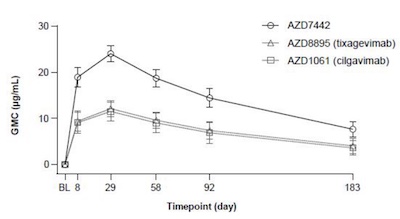 But do the antibodies actually stick around for 6 months? That’s an astonishingly long time, since the normal half-life is days to a week or so.

The answer is yes, as seen in the pharmacokinetics curve shown here (Supplement figure 2A in the paper). It looks like the geometric mean concentration (GMC) goes down by a factor of about 2.5, maybe a bit more.

In other words, you’d expect the concentration to remain above the level found in convalescents for at least 6 months.

So there’s a partial answer to our question: engineer the antibody to have a longer half-life, and then dose it really high so after a couple half-lives it’s still at an effective level. Sophisticated antibody engineering and brute-force dosing.

The second paper covers rather similar ground, so I won’t drag you through all of it. 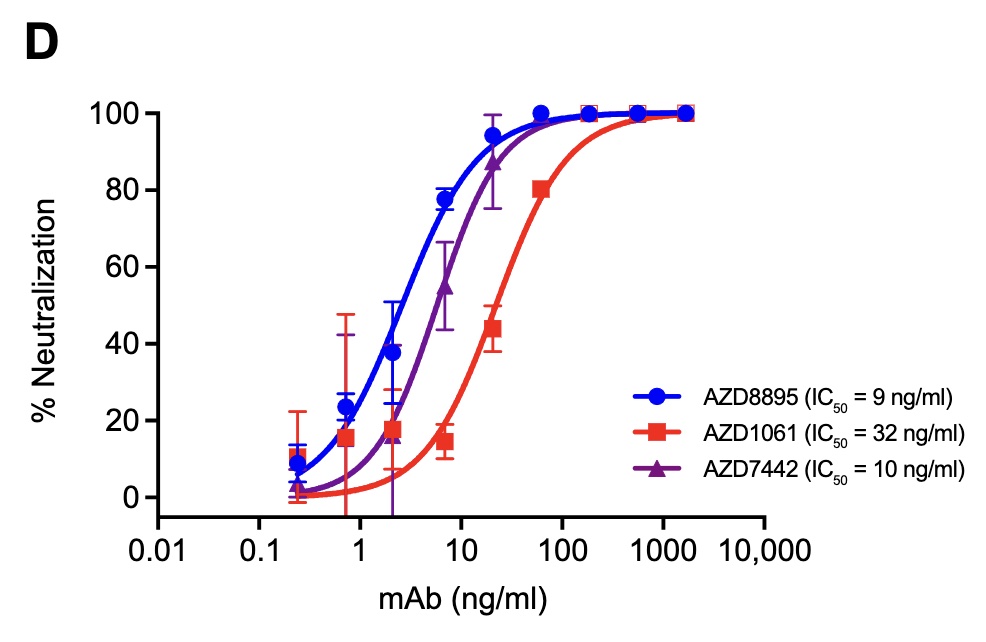 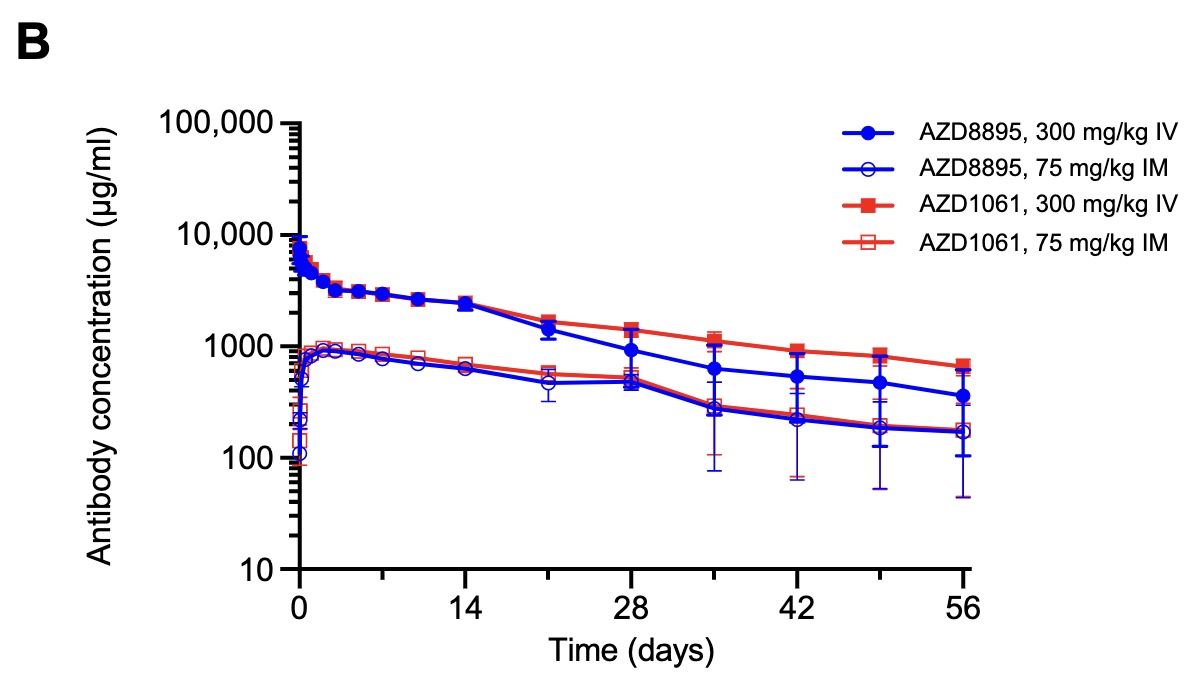 But there are 2 particular sub-figures I want to highlight, which tell us (a) what antibody levels seem to be sufficient to neutralize the virus, and (b) how long antibody levels can be kept above that. These are Figures 1D and 2B in the paper, shown here.

Now I can begin to see that it makes sense that this thing works: very high doses are well tolerated, and the half-life is long enough to give 6 months of immunity. 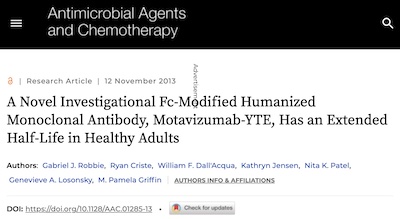 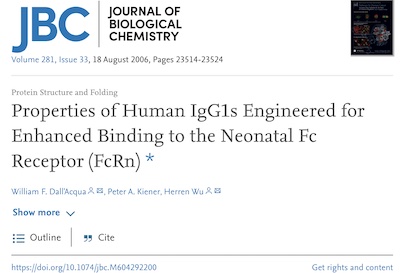 But… but… but! How exactly did they get the antibodies to have such amazingly long half-lives?! Following the references in their bibliographies led us to 3 papers (actually more, I just ran out of energy at 3) from 2002 - 2013 on this subject. [5] [6] [7]

It appears there’s a thing called the “YTE substitution”, which in the usual protein mutation notation makes the triple substitution M252Y/S254T/T256E (hence YTE). This was found to extend dramatically the half-life of antibodies, by 2-4x. Since these are somewhat older papers, they were of course done with antibodies that had nothing to do with SARS-CoV2. The discovery with Evusheld was that the technique carried over to SARS-CoV2.

Everybody points back to the Dall’Acqua papers as the source of this magic. But a quick read-through was maddening: although the results were described, they were not motivated. How in the world did anybody think to try that?! I’m mystified.

The Weekend Conclusion… and Some Remaining Puzzles

So the answer to our question of “how can it possibly work?!” seems to be, at the surface level:

But there are still some questions that bother me:

So we learned something… and we also learned how little we know.

A typical day in science.