Somebody asked me to put a headshot up on this crummy little blog that nobody reads (CLBTNR). No idea why, but…

Why in the world would you care what I look like?!

Still… never let it be said that I don’t try to accomodate questions. Of course, the hinkier the question, the more passive-aggressive the answer is likely to be, but… I remind you that you are here of your own free will.

Herewith the now-canonical Weekend Headshot (click to embiggen). Now you know what I really look like, deep down inside.

And yes, that’s really me. Last December, for a variety of reasons too complex and personal to bother with, I got a cranial MRI. (Note to MRI technicians: do not ask, just before cramming a patient into a confined space, “You’re not claustrophobic, are you?” The power of suggestion is a real thing.)

Turns out, by some happy accident, I appear to be ok (or at least as ok as I ever am).

I asked for some images, so they burned me a DVD. Unfortunately, it was a software DVD with a Windows application, of all things, to view the images. That was less than completely helpful! 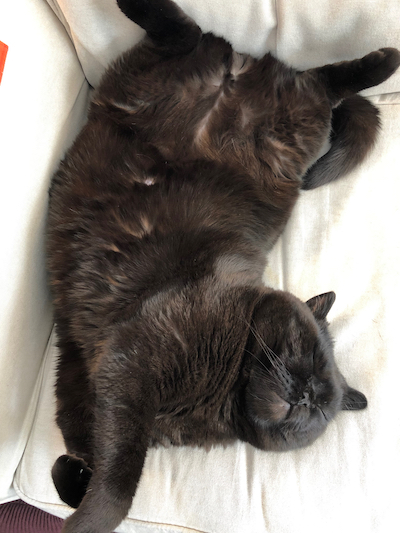 However, a friend who also happens to be an academic radiologist pointed me at the Horos Project [1] and their open-source Mac viewer of DICOM-format images. I extracted an MP4 from one of the series (probably neurological nonsense, but it looked sort of like a head, so I went with it), and then converted that to a 2-second animated GIF for browser interoperability (and to strip off any inconvenient EXIF information).

The creepiest part for me is the disembodied left ear in the first frame, for some reason.

But to be honest, this isn’t even the creepiest sequence. (That one was a slice starting at the front, in which my teeth and eyes sort of jump out at you suddenly.) So… this isn’t the actually worst picture that’s ever been taken of me.

Now you know why you don’t want a headshot of your humble Weekend Editor.

(Hey, US Department of State: Can I get this one on my next passport?)

“Wait, we’re going to have to do it again - you blinked.”

Yeah, turns out it’s hard to lie still for 20min and do nothing but breathe gently.

Unless you remember meditation from decades and decades ago, whereupon I regretted not paying closer attention back in the day. :-)