Let’s think about something other than COVID. Not Lynyrd Skynyrd’s “Free Bird”, awesome as that is, but an actual free bird consorting with flying humans. 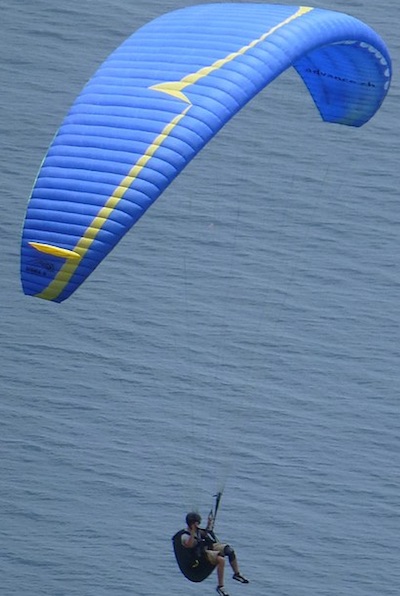 Paragliding is one of the fun things I’ve been eyeing for a post-pandemic retirement hobby. Or, at least, “experience” if not a hobby.

A lot of that is due to Tucker Gott, whose YouTube channel about powered paragliding caught my imagination a couple years ago. (Though, to be honest, it’s quite annoying how often people report him to the FAA or call the cops on him. It must be tedious to have to carry part of the FAA regulations around with you so you can explain repeatedly that you’re doing everything safely and utterly lawfully.)

But when people take to the sky in something less armored than an airplane, they’re bound to run into the true masters of the sky: birds. See… these flying dinosaurs are more than just a bit territorial. The do not like us invading their space, and are not shy about expressing that opinion. There are a number of amazing videos of birds taking down drones, one small compilation of which is shown here.

So I was delighted to discover a video of some paragliders (unpowered, just basically sailing along at high altitude) who had an apparently friendly encounter with a vulture.

These guys are cruising around over some mountains in Spain, just enjoying the trip. One of them holds out a selfie stick for the usual reasons and… what appears to be a black vulture decides the selfie stick is an excellent place to perch! The vulture apparently thinks these two nimrods are newbies at flight, and shows them just how it’s done: practicing a couple touch-and-go landings, and then gliding gracefully into the wind ahead of the big, clumsy humans.

In all, a friendly encounter… unlike the raptors vs drones videos.

Apparently, this black vulture is an exotic species: it’s native to the Americas, and not found in Europe. This particular animal has been apparently hand-raised for hunting, and decided to pay a visit to the weird humans who look like they have… no visible means of support, as the saying goes?

Later: I discovered this is a bit of a set-up. [1] They have actually trained raptors to come meet them in the sky, perch a bit, and then return to base. Their 2 trained black vultures are named Edmund and Baldrick (apparently Blackadder fans?). Ok, not an encounter with an entirely “free” bird, but still awesome nonetheless. Maybe even better.

1: Apparently the term for flying with a trained raptor is called “parahawking”. More traditionally done with falcons instead of vultures, but still. Today I learned a new word! ↩

Enjoyed this immensely. Nice flying with you!

↪︎ Reply to Ann Gardner
Comments for this post are closed.