US Senate: does one party filibuster more?

Sen McConnell claims the Democrats abuse the filibuster! (Because of course he does.) But what do the data say? 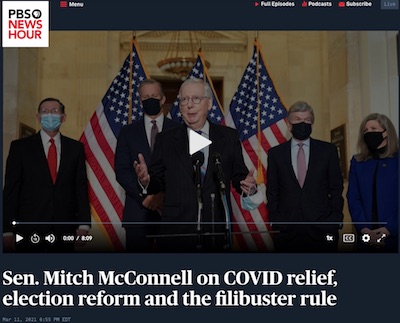 Senator McConnell was interviewed on the PBS news hour a few nights ago, by Judy Woodruff. [1] He made the extraordinary claim that the Republicans were innocent, but that Democrats had abused the filibuster:

Our Democratic friends in the minority last year used it frequently to stop things that we might have wanted to do. Now they’re threatening to blow the place up and turn the Senate into the House, so that they can get their way, with presumably 50 Democrats voting yes and the vice president being in the chair.

Now, that is quite startling! The Republicans have been so clearly radical, I find it hard to accept. What do the data say?

It’s hard to come by explicit data on the use of the filibuster in the US senate. That’s because a filibuster isn’t a particular legislative move or a formal filing; it’s a behavior. If you insist on talking ad nauseam, that’s a filibuster whether you say so or not. And it’s even worse nowadays: you don’t actually have to stand up there and talk. You just need to signal privately your intent to filibuster to the party leaders , and everything grinds to a halt!

However, since the early 20th century there has been a formal filing to close off a filibuster, called a cloture motion. We can track cloture motions filed versus time. On the theory that filibusters irritate people enough to try to get the votes for cloture, this might track filibusters. On the other hand, if there is not a 60% supermajority to invoke cloture, maybe nobody tries and this under-represents filibusters? I dunno, but it’s all we can get easily. 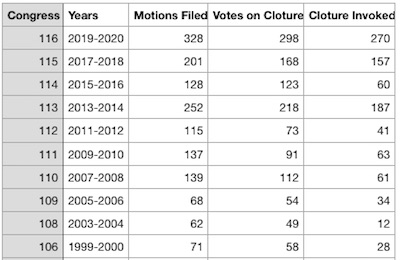 So we took the US Senate’s web page for cloture motion filings and captured them into a tab-separated value file. [2]
We dropped the current (117th) senate term, since it’s only been in session for 3 months. We’re doing this by senate term, each of which is 2 years long, rather than by individual years. That’s the time granularity over which party majorities can change. So we’re starting with the 91st session (1969-1970) and ending with the 116th session (2019-2020). That’s 50 years of data, starting in 1970 when pundits seem to claim the use of filibusters took off.

You’d think it would be dead easy to get a table of party counts in each senate session, but apparently not. The US Senate’s records are presented as a big bowl of word salad [3], not a nice table of analyzeable data. So… a bit of hand screen-scraping was in order. 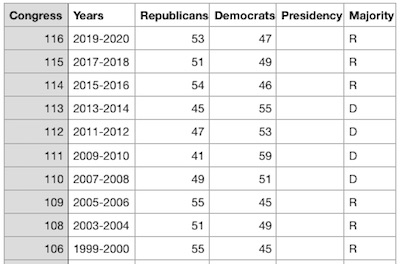 We then massaged this data in a couple of ways: 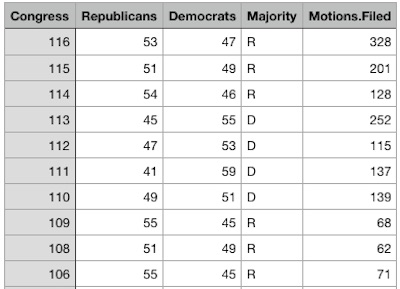 To analyze these data, we wrote an R script [4] to load the cloture & party data, then assemble them with an inner join on the senate session number to produce an omnibus dataset here delivered as a combined tab-separated value file. [5] In the process, there was considerable constraint checking for quality assurance purposes: the numeric fields were always positive integers, the number of senators was always 100, the majority party in the senate followed the decision rules from the seat counts and the presidency party, and so on. (The details are available for peer review in the script itself.) 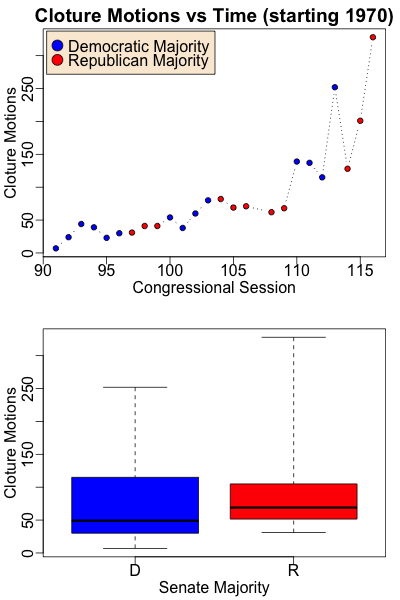 First, let’s just have a look at the data:

When we break down by majorit party the mean clotures, the standard deviation of clotures, and the number of years in power, we see about the same thing:

McConnell’s hypothesis is that the Democrats are somehow bad, so that should show up as some kind of difference between the two parties as far as cloture/filibuster counts. Our null hypothesis against which that will be tested is basically that there is no such difference. (Null hypotheses are almost always about “nothing going on”, “no difference”, and hence the name “null”.)

This is a simple $t$-test for whether the mean number of cloture invocations per session is different by party majority. The boxplot above leads us to predict that this will be statistically non-significant:

And with a $p$-value of 40%, it is indeed non-significant. We therefore reject McConnell’s hypothesis and accept the null hypothesis that things aren’t that different betweeen the two parties, as far as use of filibusters and as far as cloture motions track filibusters.

The results lack statistical significance, so we can’t rule out that this difference occurs just by chance. However:

But even without statistical significance:

So… it’s a bit murky, but we can say for sure that McConnell’s accusation is rejected by the data.

3: United States Senate, “Party Division”, senate.gov, 2021-Mar-14. NB: Data is not presented here as a table, but as text. A certain amount of hand extraction into a tab-separated data file was necessary. Results captured as 2021-03-15-filibusters-parties.tsv↩

4: Weekend Editor, “R script for analyzing senate filibusters”, SomeWeekendReading blog, 2021-Mar-15. There is also a transcript of the execution of this script, to peer-review the results reported here.↩

Do you have any data on which party petitioned for cloture in which years (how many petitions or filings were by Dems and how many by Republicans)?

No, unfortunately I do not.

The sources cited above just give the total number of cloture motions in each session of congress, not the party filing the motion. One could, of course, get such information from a detailed reading of the minutes. It’s probably available somewhere, but I just needed the total number of filings per session and the party in charge of the senate and presidency.

But you know… that might be something worth writing to your senator about. It will be read by a staffer, but probably the staffers know where all the goods are.