When You Say 'I Did My Own Research'… What Does That Sound Like to Actual Research Scientists?

Lots people say ‘I did my own research’ on subjects in which they are not sufficiently educated to evaluate data, let alone form an independent opinion reliably. Here’s what that sounds like to actual research scientists.

Who knew the CDC hired comedians? In management?

Our Main(e) Event today is from an epidemiologist who is the CDC director in Maine, Dr. Nirav Shah.

Now, the xenophobic sector of US Republicans (which as far as I can tell is nearly all of them) may demur at listening to a ‘foreigner’ with a name like ‘Nirav Shah’. I freely admit that Shah was in fact born in Wisconsin, but he seems to have overcome that initial disadvantage, becoming both a doctor and a lawyer. You might want to listen to him. I know that I personally will shut up and listen when he talks about pandemics and epidemics.

As you may have noticed, this last weekend we had a blizzard here in New England. While I was out renewing my snowblower pilot’s license, Shah was imagining what the covidiots who say ‘I did my own research’ might have to say on the subject of blizzards: 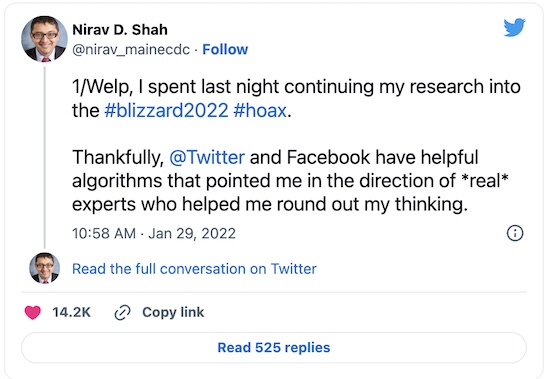 To my surprise, their insights actually CONFIRMED all of my pre-conceived notions about this storm.

3/All of this research has led me to conclude that the hype around #blizzard2022 is being driven by the weather-industrial complex.

In short, it is all #propaganda.

I am concerned for our republic.

4/First of all, @CDCgov says blizzards are no big deal so long as you’re financially stable, don’t have to leave your house for work, have food, can afford heating and internet, and don’t have to worry about power outages.

Those apply to me. So why should I care about others?

5/This morning, my neighbors said I needed to put salt on our shared sidewalk to keep THEM safe!

But putting salt down is inconvenient. Why should I be inconvenienced to help others in my community?

Can’t people who are vulnerable to slips and falls just stay inside?

6/Get this: my town implemented a “parking ban” too. They say it’s to help them keep roads cleared.

But it really amounts to the government telling me, a taxpayer, what I can and can’t do with my own private property. Didn’t we fight a war against England to prevent this?

7/This is a blatant violation of the Takings Clause of the 5th Amendment to the @usconstitution.

It also violates the Declaration of Independence.

A lawyer I chatted with last night on Facebook says this could go all the way to @Scotus.

8/And these so-called meteorologists have no clue what they’re talking about.

Earlier this week, the forecast was for 10-20 inches. Then it changed to 8-12 inches. And now they’re hyping it up as a “blizzard”!

I challenge @KeithCarson to debate me publicly on this.

9/I also find it deeply suspicious that their “models” change all the time. I thought this was “science”, which does not change (see, e.g., gravity).

Who pressured them to change the models? My hunch: follow the $$$ and we’ll find out.

10/We really need to be talking about the impact of #blizzard2022 on our kids!

Were it not for the alarmism of Organized Meteorology, our kids would be outside playing today.

But instead, kids are inside.

11/Now I’m watching @weatherchannel and they’re telling people to wear gloves if they go outside.

Do we know what the long-term side effects of gloves are? How do we know that gloves won’t cause skin infections? Or vitamin D deficiency?

I know a guy who got frostbite even though he was WEARING GLOVES. #CHECKMATE

13/Plus, I did the research and frostbite only happens about 1% of the time.

And my buddy who got it was FINE after his ER visit and skin graft.

14/I mean, sure, some people might die from from the cold. But how many died “from” the cold, vs. “with” the cold?

And how many of those who died had pre-existing conditions?

Why won’t anyone tell us? #transparency

What’s next? Telling me that I won’t get service in a store unless I’m also wearing a shirt or shoes?

We need to stop living in fear, #sheeple!

Treatments for frostbite are SO GOOD now. I’ll be fine.

I am warm blooded and have a skin system that is perfectly capable of keeping me warm, thank you very much. #Factsnotfear

17/I went out for a drive this morning and the entire town is on lockdown!

This is a completely ridiculous overreaction to something that is seasonal, and will literally melt away. It will assuredly be gone by Easter. #blizzard2022

See? Told ya he was brilliant. I didn’t expect he’d also be funny, though.

The only thing missing is a suggestion to sprinkle ivermectin as a snow & ice melter. Which makes approximately as much sense as ivermectin for COVID-19, so why not? (Whoops: spoke too soon! One of the replies suggested self-prescribing some ivermectin, and then peeing on the snow. Yes, that’s much better…)

Unless, of course, you’re doing it like XKCD #2515, from back on 2021-Sep-13, in which the obvious is laboriously and unreliably rediscovered:

It has come to my attention that a fellow Mainiac wanted to thank Nirav Shah for all he’s done for public health in Maine, and did so in what I can only assume is the typical Maine fashion: 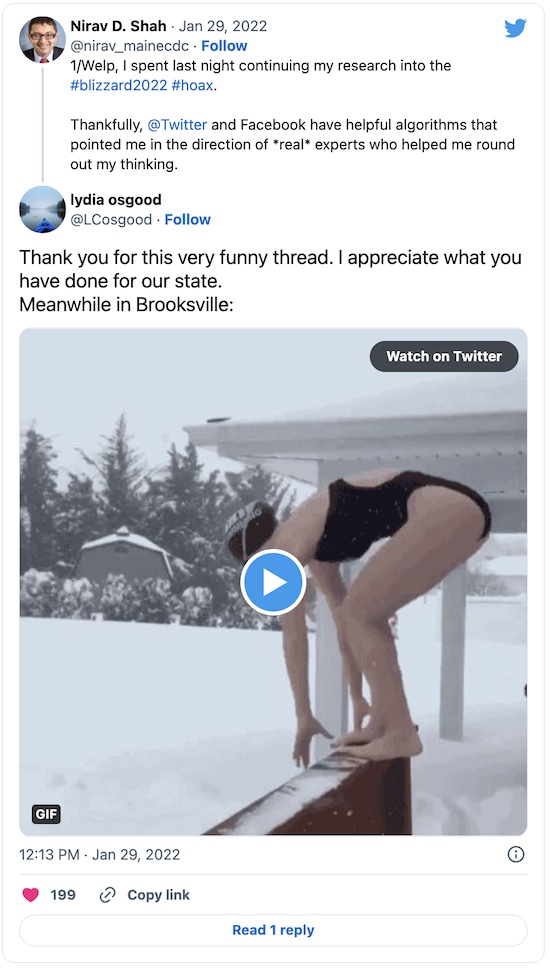 I mean… I love winter too, but I stand all amazed at the true professionals.