It seems Twitter is dying. Time to armor plate this blog so quote tweets survive. 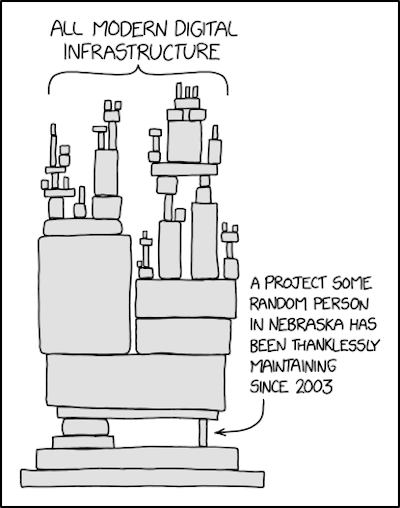 So, yeah: Twitter seems to be dying. Musk has fired all the site reliability engineers, made demands senior engineers deemed unacceptable enough to quit, and generally destroyed internal knowledge of bespoke systems. Years of building have created undocumented (and unknown) circular dependencies, so when it next crashes… it may never come back. XKCD #2347, shown here, is (as usual) uncannily on point.

It would be ironic but useless to refer to Twitter threads about this, so here’s a Vanity Fair article that covers the nontechnical ground. [1]

in the roughly 2.5 years of this blog’s existence, it has embedded tweets many times, using Twitter’s own embed code. When Twitter disappears, so do those references!

So I’ve spent the last 2-3 days screenshotting the $O(10^2)$ tweets quoted, and hyperlinking the resulting image to the actual tweet, while it lasts. Crude, but effective:

Feel free to tell me if I’ve missed any, but my friend grep and his crew think I got them all: