Sometimes politicians pursue policies so breathtakingly out of touch with reality, you just don’t know what to say. (Understandably, because “breathtaking”.)

Back in the 1980s, a group of internet wags proposed something they called the “Darwin Awards” to be given to those who perform some action so breathtakingly stupid that they either get themselves accidentally killed or sterilized, thereby failing to reproduce and marginally improving the human gene pool.

As it says on this blog’s quotes page:

“Creatures inveterately wrong in their inductions have a pathetic but praiseworthy tendency to die before reproducing their kind.” — W V O Quine, “Natural Kinds”, in Ontological Relativity and Other Essays, 1969.

This dubious, though funny, tradition continues to this day.

Let it be noted clearly: by calling out someone’s behavior as worthy of a Darwin Award, we are not in any way wishing them harm, let alone death. But we are calling out the skull-breaking stupidity of their alleged deeds.

And the nomination goes to… 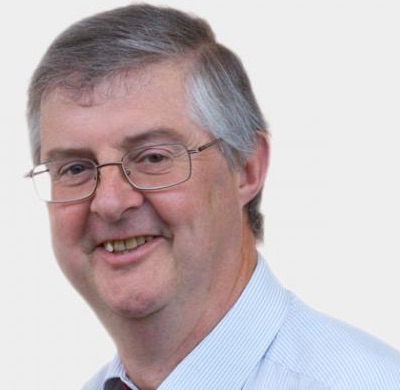 At first glance, beyond his succeeding to the position of First Minister, he seems an otherwise unremarkable Labour politician. Maybe even a decent fellow, who has remained married to the same woman for 40+ years. Ok, he apparently rather impractically studied Latin at university, which makes him interesting only because your humble Weekend Editor is also a bit of a Latin nerd. (Though smart enough to confine it to secondary school.)

He is in charge of the Wales COVID-19 strategy, including vaccination, which brings his policy reasoning to our attention. Wikipedia says his leadership meant the rules were better undersood in Wales than Boris Johnson could do in England. Bit of a low bar, perhaps, but at least he was on the right side of it.

So why a Darwin for him?

The highest priority for public health, once vaccines became available, was getting it into arms as fast as possible. I haven’t decided what to think about reserving 2nd doses vs using them as 1st doses for more people, but the case for getting 1st doses out as fast as possible is beyond dispute. Anything else spreads the disease, costs lives, and encourages more lethal variants to crop up.

Drakeford’s brilliant strategy, according to The Guardian [1] [2], was to slow down the use of initially limited supplies of the Pfizer vaccine, to “make it last” until the next delivery:

We will be using all the Oxford vaccine that we get as we get it, the Pfizer vaccine has to last us until into the first week of February.

So we have to provide it on a week-by-week basis. What you can’t do is to try and stand up a system which uses all the vaccine you’ve got in week one and then have nothing to offer for the next four weeks.

We won’t get another delivery of the Pfizer vaccine until the very end of January or maybe the beginning of February, so that 250,000 doses has got to last us six weeks.

That’s why you haven’t seen it all used in week one, because we’ve got to space it out over the weeks that it’s got to cover.

So there are 2 strategies under consideration here:

Strategy (1) vaccinates a bunch of people as fast as possible, making them at least partially immune as soon as possible. Strategy (2) makes those same people wait, while you vaccinate slowly for no particular reason other than to be seen doing something every day. It sacrifices lives for political theatre.

Vaccines are not like food and water, to be rationed out in an emergency over a period of time, to prevent starvation or thirst. The correct strategy is to use them up by getting them into people’s arms as fast as possible. The alternative is to make people wait, during which time some of them will die.

Technically, a Darwin Awardee must be killed by their own deed, or at least accidentally sterilized so they do not reproduce further. Drakeford does not therefore qualify, technically. But… given that some nonzero number of people died before this policy was corrected, he’s certainly had an effect on others.

Now, ‘scuse me, I gotta go fire up my CPAP machine, ‘cause that’s so breathtaking.