Somebody asked me (honest!) about a news item linking improved treatment outcomes for COVID-19 with patients using statin and ACE inhibitor drugs. Very preliminary stuff, and the effect size is not giant, but it is peer-reviewed and looks quite legit. Not gonna change the world, but even small bits of good news are welcome.

Initially I was a bit suspicious:[1] [2] there’s some evidence that ACE inhibitors actually increase the expression of ACE2, which SARS-COV-2 uses to enter cells, and that would increase risk. Also, the paper is by a bunch of cardiologists, apparently trying to tell us their discipline rules the world. Finally, it was a press release (reference 1), and your Weekend Editor has a rather dyspeptic view of press releases.

Happily, I was wrong on all counts. This looks like preliminary but legit evidence (reference 2) of at least some lowering of the risk of mild COVID becoming severe. There was an accompanying paper (reference 3) on the mechanism, involving 25-hydroxy-cholesterol and several effect-rescue assays that also look pretty good. They’ve got clinical evidence of effect, and lab bench evidence of a mechanism of action. Now they need confirmation from an independent lab, maybe a multi-center test, and they’ll be ready to figure out how to use the information in combat situations.

Clinical effect of statins on COVID-19 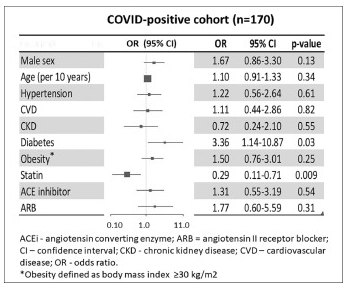 Here’s a summary of their results. They’re measuring the odds ratio of progression to severe COVID-19 (and recall that, as they’re using logistic regression, we’re always dealing in log odds ratios). The predictors are in the column on the left. The thing in the middle is sometimes called a “forest plot”: the favorable situation (odds ratio < 1.0) is on the left, and unfavorable on the right. You want to see the central blob and its 95% confidence interval be on one side or the other of 1.0 in order to declare that variable is a good predictor. Note that: use of statins is a good predictor (and in the good direction); diabetes is a good predictor (in the bad direction); nothing else makes the grade (including ACE/ARB drugs).

So that was time to progression to severe disease. They also did a similar analysis for time to death. However, since nothing was statistically significant, it was exiled to the supplement of the paper. The supplements are always either (a) where the good stuff is, in detail, or (b) where the nonsignificant data goes to die.

They did something called a Cox proportional hazards model to (essentially) measure probability per unit time to the onset of severe disease, or to recovery based on the statin/non-statin cohorts. From those, you make Kaplan-Meier plots (conventionally flipped vertically compared to here), showing the cumulative progressions/recoveries vs time. By comparing the black line with the dotted line, you can see that the statin patients were slower (or never) to progress to severe disease, and faster to recover. More quantitatively, they computed the usual hazard ratio and associated logrank $p$-value, to assess whether the curves are statistically significantly different, not just visually. From table 2 in the paper:

There’s more, but that’s kind of the bottom line: 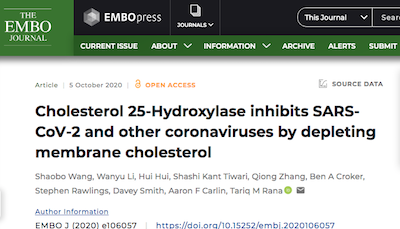 Daniels et al. then speculate about all kinds of mechanisms, but they’re all over the map and show no data. Fortunately, the next paper (Wang, et al., reference 3) does exactly that.

They explore a model which is at once pretty simple (A causes B causes C causes D…) and laughably complex, as things always seem to be in biology where the Law of Unintended Consequences runs riot. They are very careful to do a number of “rescue assays” to see if interrupting the chain at various points has the effect one would predict. 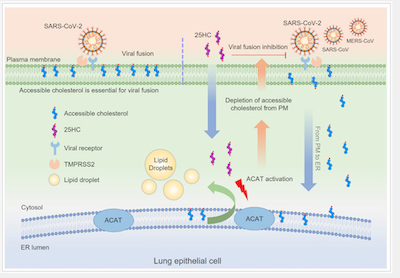 The basics: viruses stimulate the innate immune system, which causes the release of interferons of various kinds, which turns on a gene called CH25H, which makes something called 25-hydroxycholesterol (25HC), which activates another gene called ACAT on the ER membrane (and elsewhere), which then internalizes cholesterol usually found in the cell membrane. This low-cholesterol membrane then prevents the virus from being endocytosed, or absorbed into the cell. It stays outside, where it can’t do much damage and where it can be recognized by the adaptive immune system (eventually). So… A causes B causes C causes… for 6 steps!

They present evidence that cells infected with SARS-COV-2 do indeed raise their expression of CH25H, and that this is also observed in patient samples. They then showed that when they forced overexpression of CH25H in cell lines, SARS-COV-2 entry to cells was lowered, and that was statistically significant by $t$-test. (Showing Figure 1 C & D here: green spots show cells infected by SARS-COV-2, while the bar chart shows the data after image quantitation. It is significant: $p \leq 0.0001$ by $t$-test.)

Then, the objections start: 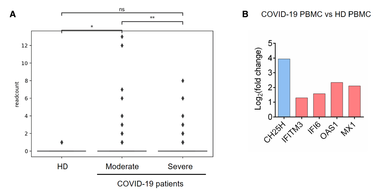 But is this just a cell line thing, of no relevance to actual patients? They also did something similar in patient samples (Figure EV-1), to similar effect. On the left are the gene expressions levels of CH25H in epithelia from bronchoalveolar lavage (basically they wasn your lungs from the inside and collect the goop; doesn’t that sound pleasant?) in healthy, moderate, and severe COVID patients. The differences are statistically significant by $t$-test ($p \leq 0.01$ or $p \leq 0.05$). On the right are the gene expression fold inductions (ratio of infected to normal patient levels); note that CH25H is induced about 4 times more in infected patients. (They did not report significance here, but it looks good and we could follow their reference chain to find the original data and check, should that become an issue.) So it’s not just a cell line thing.

But is this dependent on the dose of 25HC, as you would expect? Yes. In Figure 2 A&B shown here, we see that both quantitatively and visually with a GFP fluorescence image. More 25HC leads to less SARS-COV-2 entry into cells.

But can you “rescue” the effect (get the virus to work again) by adding lots of cholesterol? Maybe you can overload things, so CH25H/25HC/ACAT and company can’t deplete the membrane cholesterol any more. Figure 3 shows this, by doing all combinations of adding 25HC or not and adding cholesterol or not. All the expected differences are significant, by $t$-test with $p$ in the range of 0.01 to 0.0001.

But is ACAT really the gene involved in this mechanism? If you “knock down” the ACAT gene with shRNA or an experimental ACAT inhibitor compound, you’d expect the virus to be able to get in again, i.e., another rescue experiment. Figure 4 shows this. Yes: whether by shRNA to prevent ACAT from being made, or with a molecule to inhibit ACAT activity, once ACAT is shut down the effect goes away.

But does SARS-COV-2 itself actually activate ACAT and 25HC? Figure EV4 shows that the answer is yes. So basically, these data taken together shows that SARS-COV-2 activates CH25H, then 25HC is made, then ACAT is activated, then cholesterol is pulled in from the cell membrane, then virus entry is blocked. 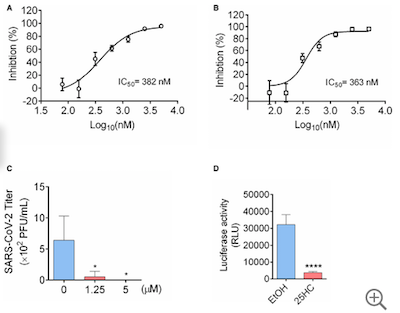 But does that work in something like a human lung, not just in cell cultures? Figure 5 shows that the answer is yes. They grew lung organoids (basically a cell culture in something like soft agar where lung cells can build 3d structures that are at least somewhat similar to actual lung tissue). The dose response curves show that the inhibition of virus by 25HC is still dose-dependent in cell lines, and that the potency looks to be around 0.5$\mu$M. Also, the bar charts below show a dramatic effect on virus blocking in lung organoids. So it’s both dose-dependent, and works in something like an organ.

There’s a lot more there, but it’s pretty convincing at this point. The only thing you might wonder is why bother with statins as a back-door path to all this, when you could administer 25HC itself and get the effect more directly? Reference 5 points out exactly this. But… practically speaking, statins are an old and very safe drug taken by millions with excellent effect on cardiac health, while 25HC use as a drug is a totally new thing, requiring new trials. Still, it’s worth investigating, I suppose.

Ok, so that was a long trip. I think the basics are:

So take your statins, if you doctor has prescribed them!

1: In the interests of disclosure, one should note that both your Weekend Editor and Weekend Editrix take a statin and an ACE inhibitor. So, if anything, we want something like this to be true, as it would grant us some extra protection. And my prior says that ACE2 (binding site of SARS-COV-2) and ACE (the blood pressure med target) are homologous proteins, so maybe inhibiting ACE has some crosstalk to ACE2. Be appropriately skeptical of my prejudices. (Comme d’habitude!)↩

2: Also, your humble Weekend Editor once worked for a company which did some of the first gene sequencing around ACE2, and thus had an early ACE2 inhibitor around 2001. It failed clinical trials in 2 separate disease areas, and was later out-licensed. Nothing much came of it, though now its interest in blocking the COVID-19 entry point has returned. Experiencing 2 clinical trial failures would make me even more skeptical in this area. ↩

3: For example, age is a risk factor for severe COVID. But it’s also a risk factor for needing blood pressure and high cholesterol meds. So if you didn’t account for age as a confounding covariate, you might conclude that older people take cholesterol meds, and older people get severe COVID-19, so maybe the cholesterol med caused it — when the opposite is true, it protects. Intuitively, you first regress the log odds ratio of severe disease on all the confounders (age, sex, obesity, …) and then do prediction using the cholesterol/bp meds on the residuals. (In fact it happens slightly differently, but that’s often the way to explain it for the first time and have people more or less get it.)↩

4: And most especially: please don’t ever take anything you read here as medical advice! Your humble Weekend Editor is not an MD, but a totally different sort of doctor (PhD). The closest we’ll come to medical advice is: (a) get a doctor, and (b) do what your doctor says. Right-wing political mischief with health insurance in the US is a problem everybody here has, so do your best with that. ↩