COVID Vaccines: Why Not Full Approval?

Somebody asked me a couple days ago why the Pfizer, Moderna, and J&J vaccines don’t have full FDA approval. Umm… hmm. Good question.

It’s bad out there. Really bad. Big fractions of the population are infected with Republican partisanship, one of whose symptoms seems to be to act willfully against one’s own self-interest.

Even prominent Republicans are finally, reluctantly coming to this conclusion. For example, David Frum. Now normally, I have no patience whatsoever with his sort of intellectual anti-intellectual pose. But Republicans, generally, adore him. So it’s important that even he is now saying vaccine resistance seems to be deliberate, self-inflicted sabotage: 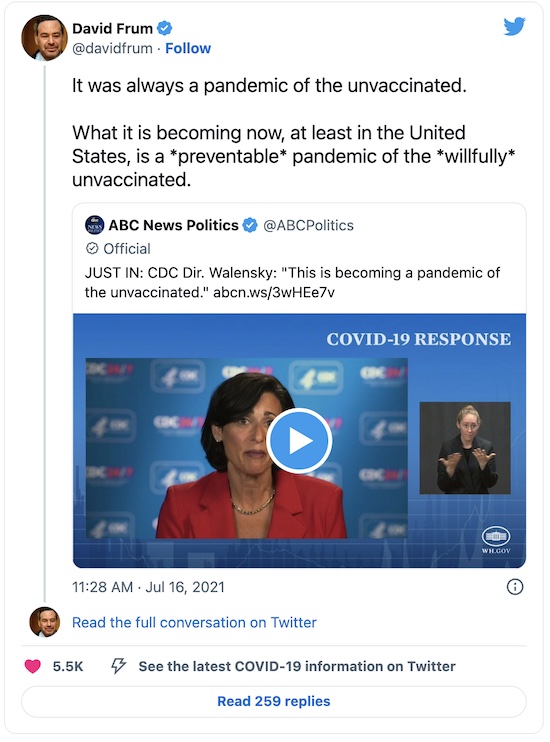 Preventable. Willful. Remember that, and do better.

Others are just plain crazy. They myth of the tracking/birth control chip just won’t die: 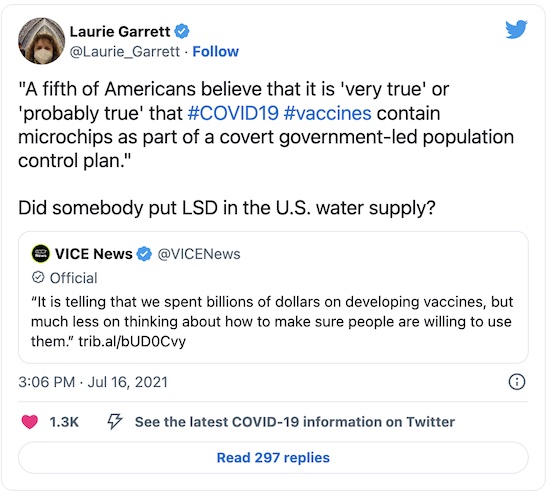 Really? A tracking chip for birth control? I know Republicans seem to hate birth control and avoid learning anything about it, but we already know how to do birth control. And this isn’t how it works. Also, as we’ve previously written on this crummy little blog, actual tracking chips for pets don’t work that way either:

Lots of people say the vaccines are “experimental”, and they won’t let the government experiment on them. Deep sigh.

First, the “E” in “EUA” stands for “EMERGENCY Use Authorization”, not experimental. The experimental part has been done: that was the research work in early 2020, followed by the clinical trials in late 2020, and then the FDA Emergency Use Authorization in December 2021. That part’s done, with full and eager consent of the participants. COVID-19 is an emergency, and the fast approval of vaccines is a response to that.

Second, there is a (minor) point to be made here: why aren’t the Pfizer/BioNTech, Moderna, and J&J vaccines fully approved yet? We’ve just run the largest Phase IV (post-approval) clinical trial in human history, on more than a billion subjects world-wide. Isn’t that enough for full approval? Given at least some of the willful resistance to vaccines hinges on the current partial approval, wouldn’t it be prudent public health policy to push for full approval of all 3 vaccines ASAP at least in the United States? (Other countries, of course, have other processes.) 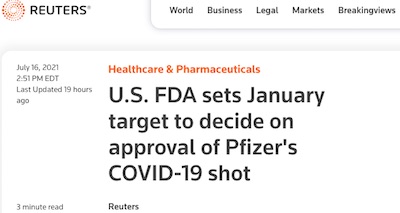 Here at Chez Weekend we think so.

That’s why we were gratified to see progress, albeit glacially slow progress, on full approval of at least the Pfizer/BioNTech vaccine reported by Reuters. [1]

The meeting for full approval will happen at least by 2022-Jan, though the article notes that it is likely to happen sooner than that, according to Janet Woodcock, the acting FDA Commissioner. They do note specifically that full approval might help ease vaccine hesitancy; what I don’t quite get is why they’re being so slow about it. After all, about 85 million Americans have now been fuly vaccinated with Pfizer as of this writing, so what exactly do we need in the way of more data?!

The Pfizer/BioNTech and Moderna applications for full approval have been at the FDA for months now:

(We can sort of understand why full approval of Pfizer/BioNTech on 12-16 year olds hasn’t happened yet, since there’s not yet 6 months of safety data on the teenage group.)

So something’s a little weird here:

Clearly something is wrong. Most likely hypothesis: there’s something in the full approval process I don’t understand, and am not allowing for proper time to handle that unknown thing.

But I wish I knew what it was…