COVID-19: How Bad Was the Unemployment?

Let’s see how job losses and rebounds (not COVID-19 rebounds, this time) look for the pandemic, compared to previous episodes of economic unpleasantness.

Yes, here at Chez Weekend we’re still fighting a COVID-19 rebound post-paxlovid. Well, your humble Weekend Editor is. The Weekend Editrix and the Weekend Publisher have exiled me to the 2nd floor while they luxuriate on the first floor, with full fridge access.

The staff at our doc’s practice were slightly disappointing today, trotting out the line that the “CDC says there’s no evidence”, while refusing to consider additional evidence or to let me talk to anybody else.

Nevertheless, we persevere. (Immunologically, if not pharmacologically.)

What about the economic effects of the COVID-19 pandemic, on things like employment? 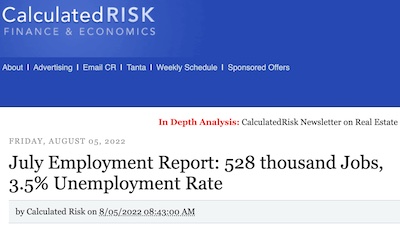 Our go-to source for data on this, as with so many things economic, is the generally excellent Calculated Risk. A recent article [1] updates us on the unemployment situation as of July, and compares with other recessions and panics in the 20th and 21st centuries.

Now, the thing I like about Calculated Risk is this: rather than look microscopically at the current moment, they take a step back and look at the broad sweep of things over time. This is so much better than the usual media coverage, which will tell you something like the point change in the Dow Jones and no more: despite the facts that the Dow is about the worst possible index with its 19th century construction methods, the point change is irrelevant compared to percent change, it gives you no idea how other market sectors (small cap, foreign ex-US, and bonds) did, and no insight into economic conditions that might cause trends. Fortunately, Calculated Risk does better. 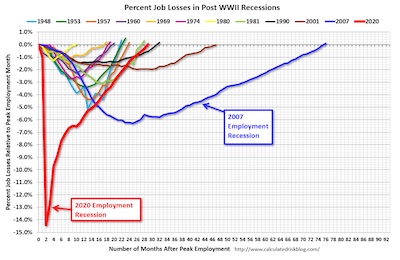 A couple of things stand out:

Not entirely coincidentally, we note that the red line for the 2020 pandemic recession has just reached 0%, i.e., employment recovery.

Next, let’s consider unemployment. Unfortunately, there are numerous unemployment rates, called mysterious things like U3 and U6.

Basically, the differences come down to who’s counted as a potential worker and who is not. U3 only includes people actively seeking employment, whereas U6 includes those who are delicately called “discouraged workers”, as well as part-timers who want full-time work. U6 will always be higher. During the Reagan administration, several versions of the index were reported so they could throw out all the discouraged workers and make things look better.

So there are way too many games to be played with unemployment rates, and a regrettable history since Reagan of doing so.

That’s why I like the labor force participation rate and the employment to population ratio:

So the participation rate gives you some of the flavor of U3/U6, in that it only includes people who show some evidence of wanting a job (or not being shut out due to systemic racism or age discrimination), while the second makes no excuses at all. 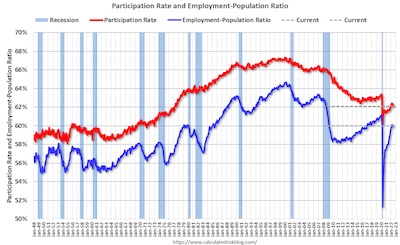 First, consider the red curve, which is the labor force participation rate, and hence has a certain amount of gamesmanship to make it prettier by blocking out “discouraged workers”, the victims of systemic racism/sexism, and age discrimination. Even with that going for it, the trend is clear: downward from the late 90s. There are a couple years when it went sideways, but it never increased.

This shouldn’t – I think – be affected by an aging population. The aged are not actively looking for work, and hence are excluded?

Conclusion: We keep using crises to amputate more and more people from the workforce, and never quite recovering.

Second, consider the blue curve, which is the very straightforward employment to population ratio, no excuses:

Conclusion: It seems clear that the last 30 years has been a story of recurring crises, each of which destroys a sector of jobs, from which we never quite recover.

The slogan of “never let a serious crisis go to waste” (variously attributed, but nowadays to conservative policies of privatization and dismantling social safety nets) seems to be in full operation.

I am a grumpy old man, of firmly liberal beliefs. Also, only very lightly informed on the subject of economics, so my opinions here are more of the knee-jerk variety that anything well thought out.

Perhaps you noticed that already, though.