US COVID-19: A Tale of Two Countries

As COVID-19 gradually comes under control in the US, we are becoming 2 countries: one that listends to science and medical advice, and another rather more backward. This leads to some startlingly disturbing contrasts in the news.

In some ways, the US is on track (though not the rest of the world). Full vaccination rates are now around 50%, in some areas much higher. The economy hums along with pent-up demand, despite periodic materials shortages. Things are starting to re-open. Earlier this week, the Weekend Editrix & I ate out at a restaurant for the first time in 15 months!

But… that’s by no means uniform. Some parts of the US – mostly the red states, if you can’t guess – actively, angrily resist vaccination and public health measures in favor of hoodoo or proto-fascist pronouncements from their regrettably authoritarian politicians. 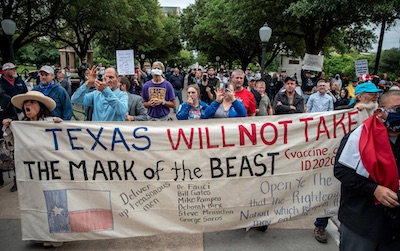 Umair Haque, internet-famous vampire (probably porphyria?) is always interesting, and not just about the vampire thing. His essays get right to the heart of current events. They are usually quite dark, though these are dark times, so that fits. He recently wrote an essay comparing our gradually eroding democracies around the world to the start of a new Dark Age. [1] It’s fascinating as always, but what caught my eye here was his cover photo reproduced here.

It shows Texans – one of the states more floridly expressing anti-science lunacy – carrying a sign comparing the COVID-19 vaccines to the Mark of the Beast in the Bible’s Book of Revelations 13.

Now, it almost doesn’t matter the number of ways in which this is wrong: that original was coded language (“ἀποκάλυψις” (apokálypsis) = “out from under cover” in Greek) for the persecution under Roman Emperor Nero, that such literature of the times was seldom intended as future prophecy (but rather as coded critique of the then-powerful), or that it’s just plain wildly irrational. Look at the people in the picture: only 2 are masked, no social distancing (and indeed one loon holding a sign saying “Social Distancing STOPS Herd Immunity”!), and so on. In particular, look at the woman in the hat at the left end of the banner: leaning forward, face grimacing, mouth wide open – actually bellowing out her angry ignorance.

This is one reason effective public health measures are hard. People stupidly, stubbornly resist. Now they’re claiming vaccines turn you into a magnet so you can be reprogrammed by 5G signals. Or that the nasal swab in a COVID-19 test “bruises your amygdala” (breaking into your skull?) to make you more submissive to authority. Or… look, I just can’t go on. It literally sickens me.

This, alas, leads to declining vaccination rates. In the US, we’ve vaccinated most of the people who are willing. There’s still some work to do, getting the vaccine out to the poor, those who get no time off work, those who just need a little friendly persuasion from community figures they trust. We’re doing that. But there’s a cadre of hard-core louts who just won’t take care of themselves, nor give a care for the welfare of everyone else who’d rather not breed new viral variants: 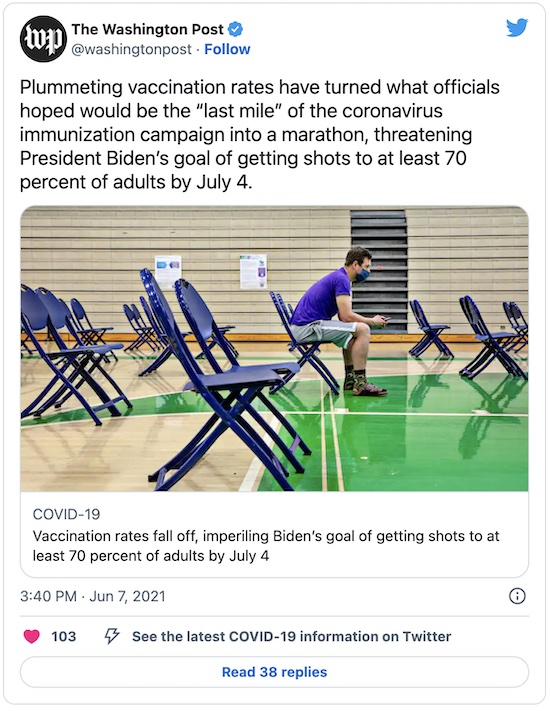 And, of course, that’s not uniformly distributed. It’s concentrated in the American South, land of Christian fundamentalism, hard-core Republicans, and low education. I am so tired of being told I have to cut them a break! But the evidence is that they prefer their local superstitions and want COVID-19 not to stop: 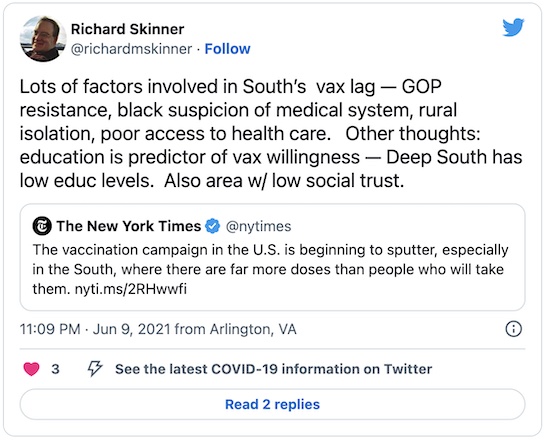 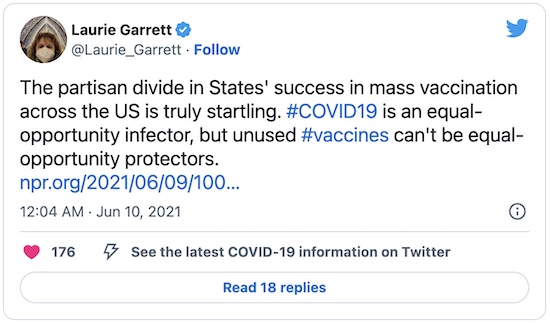 It’s gotten very, very bad. The usual go-to example of psychotic delusion in Congress is Marjorie Taylor Greene, who is a Q-Anon nut. But even more disheartening is the example of Louis Gohmert, who has represented Texas for over 15 years. He has such a reputation for stupidity that people wanting to criticize someone else’s knuckleheadery describe them as “the dumbest person in Congress not named Louie Gohmert”, so as to exclude the outlier. Case in point: here is a Reuters video in which he asks the US Forest Service if they could change the orbit of the moon in order to stabilize the earth against climate change!

Where do you even begin to deal with that?

Ick. We need a palate cleanser. Is there any good news?

Recall that if $R_0$ is the average number of new people infected by one COVID-19 patient, then the mathematical basis for herd immunity tells us that the probability a random person is immunized must be:

Of course, $R_0$ depends on the disease organism, as well as human behavior (mask usage, social distancing, and all the other preventive measures people somehow want to resist). Still, even somewhat pessimistic estimates put COVID-19 $R_0 \sim 2.5 - 4.0$. That means herd immunity can be achieved around 75% vaccination rates, as probably a high estimate of what’s required.

So the news that Seattle, at least, has achieved something near that is definitely good news. We should all hope to follow them, and fast: 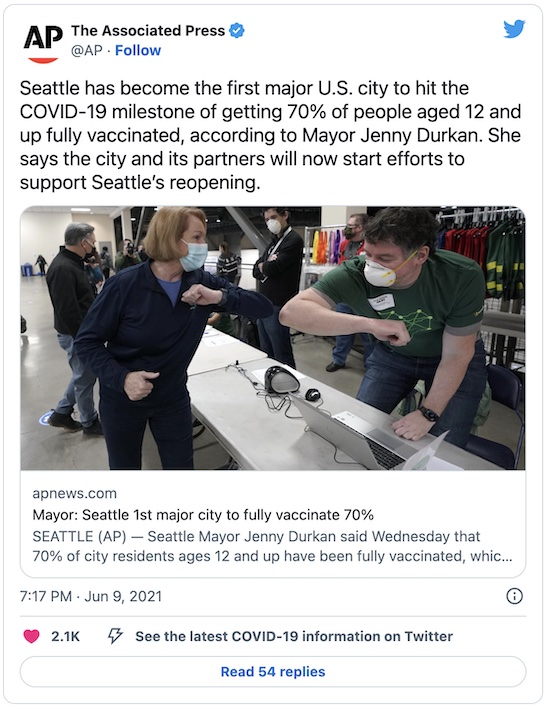 Some of the rather more rational people in the US are beginning to realize what this means. For example, Zvi Mowshowitz has some interesting advice for us about making persistent thought patterns “pay rent”, i.e., help us adapt to the world in some useful way:

Yeah, I like the thought of not being on high alert about COVID-19 any more. But only in situations where we’re mostly vaccinated! I won’t be making any trips to the rather more dangerous American South any time soon.

In the meantime, perhaps we should adapt our attitudes and at least attempt grace: 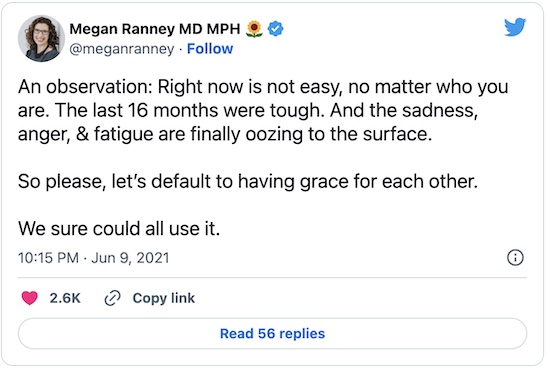 It’s of course in our interest to have the entire world vaccinated, since as epidemiologists say: “None of us are safe until all of us are safe.” But sometimes, we can just decide to be generous: 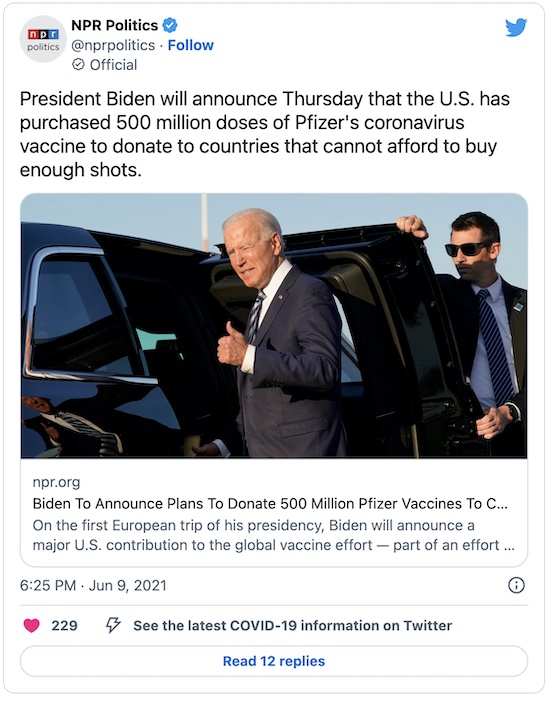 Some parts of the country have taking masking, social distancing, and vaccination seriously. They’re nearing normalcy and probably have a bright future.

Other parts are denying science and public health advice, calling masks “muzzles”, saying the vaccine is the Mark of the Beast or that it turns you into a magnet for 5G reprogramming. Their COVID-19 rates account for most of the deaths in the US. They have a future which to some degree resembles the Dark Ages: fascist and superstitious.

These times are, to quote Dickens in A Tale of Two Cities:

I wish I knew how to make it better. But maybe we don’t want better.