COVID points of hope and evaluating a vaccine

Looking for a glimmer of hope amid the COVID clouds? Worried about whether a vaccine will be appropriately safe & effective? You’ve come to the right place.

A COVID Point of Hope

Derek Lowe is a med chemist (don’t say “mad” chemist; these guys are miracle workers) who’s been blogging about the triumphs and travails of working in the pharma industry for years. His blog, In the Pipeline, is now hosted at Science magazine, which tells you he’s very well respected. [1] 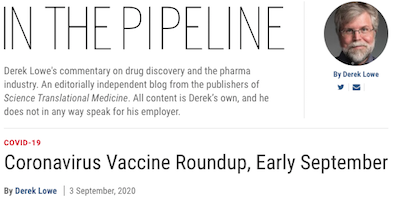 In an article from 2020-sep-03, updated Sep 17, he surveys the (enormous!) COVID vaccine efforts ongoing. It’s only gotten bigger since then: viral vectors, genetic vaccines, recombinant proteins, … all sorts of stuff. As of today, there are around 300 vaccine efforts around the world, of which 40 or so are in human clinical trials, and of which 4 are now in late-stage Phase 3 trials. Lots of stuff going on, and reason to have hope that with 300 shots on goal we should have at least a couple successes!

So take a look through Derek’s survey, even though it’s a month out of date. (A month in vaccine development used to be nothing, when vaccines took about 10 years.) The particular piece to which I believe more attention should be called is the last paragraph, which gives us great hope for the future:

An excellent side effect is that vaccine technology will never be the same after this – it’s going to be like aircraft design before and after World War II, and for many of the same reasons. This whole pandemic has been awful, in many different ways, but we’re going to come out of it stronger and more capable than when we went in.

We are indeed learning a lot. In particular if the mRNA vaccines work, then we’re on track to rapid design of test candidates. Though, to be fair, testing through Phase 3 will still take a year or so.

Evaluating a Vaccine in Paranoid Times

But… we live in paranoid times! [2] We’re full of disinformation, lying, distrust, and general disrespect for the truth. Politicians are meddling with federal health agencies scientific reporting and decision making. People are for absolutely no good reason suspicious of vaccines. [3] Consequently, lots of people in the US, despite the fear of COVID-19, say they won’t take the vaccine because they fear the vaccine more?! 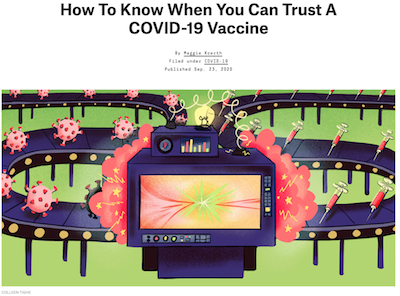 Enter 538 (did you know there’s an election coming up, and those folk are the best at building statistical models of modern American election outcomes?).
A recent article on 538 by Maggie Koerth discusses how to know if you can trust a vaccine. (I never thought I’d even have to ask that question, but… o tempora, o mores.) The high points:

So… you can engage your critical thinking skills to decide properly. It’s not all a fireswamp of loud opinions. Science matters.

1: And funny: check out the “things I won’t work with” and “things I’m glad I don’t do” categories of his blog. The category “why everyone loves us” is also great for seeing what the general public’s irrational hatred of pharma looks like from the inside. Yeah, we hate Shkreli, too. ↩

2: With deep historical roots! You might want to re-read Richard Hofstader’s masterful article from 1964, The Paranoid Style in American Politics. The seeds planted back then have flowered in the most horrible way. ↩

3: Most of it comes down to scaremongering by Andrew Wakefield, who started the scare relating autism to vaccines. His research was fraudulent, his papers were retracted, and he lost his medical license. It was so bad, he is barred from the practice of medicine in both the US and in his native Britain. So… he’s not a good reason to be suspicious of anything other than suspicion of him.↩